Getting stuffed at McGuire's 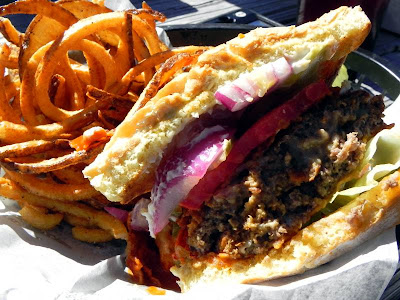 When you deny yourself fatty goodness for an entire week, it's easy to slip into fantasies involving butter, mayonnaise, cheese, bacon, creamy salad dressing and more. Did I forget to mention butter? Anyhow, all of those wonderfully tasty items begin to haunt your waking hours until you finally get the opportunity, like a fabulous cheat meal, to let your hair down and pig out.

That's exactly how I felt when I visited McGuire's only a few days ago. It was my 59th cheat and I am down 76 pounds.

Anne, John and I arrived late in the lunch hour (and hungry) to the Warehouse District sports bar on the corner of Magazine and St. Joseph Streets. Thankfully, McGuire's has their own parking lot and we pulled into an available space with no fuss and at no cost to us.

The cool fall temperatures and bright sunshine enticed us outside to lounge at a picnic table set in the tavern's back patio. Like any good bar menu, all of the greasy food groups were present and accounted for and it wasn't long before we placed our order and tried to talk joyfully over our rumbling stomachs. 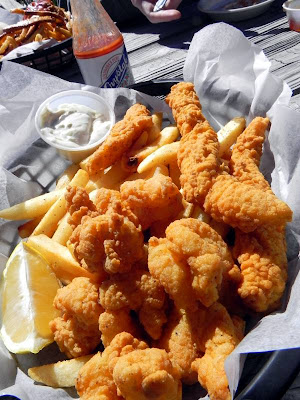 Soon after, our appetizer arrived and even though we were all starving, we had to take a moment to consider what we had picked. For fun (and out of sheer curiosity), we had elected to try the Boudin Egg Rolls which were served with a sweet plum sauce. Initially, I liked the crispy wraps filled with "Cajun" boudin sausage, but when I dipped it into the sauce, it just didn't work for me. Anne created a solution by adding some Crystal to the plum sauce and that extra kick went a long way to make the strange dish come together.

I was more excited for my main dish which was a mixed seafood platter with fried shrimp and catfish. Requesting a hefty helping of tartar sauce on the side, my cravings were finally sated as I dug into the crispy fried seafood featuring a tasty cornmeal batter and a nice-sized helping of French fries.

The platter at McGuire's comes with your choice of jambalaya, potato salad or red beans & rice. I had opted for the jambalaya, but I will never do so again. To me, jambalaya should be so sticky and moist that you can shape it into a mold and it should also be rich and heady with spices. McGuire's version tasted like the rice had been cooked in some kind of crab boil till it was light and fluffy...and the minimal amount of sausage seemed like an after-thought. 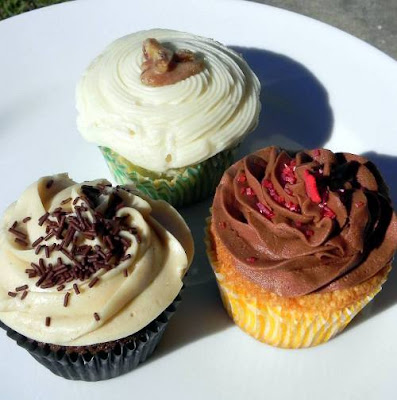 Anne and John ordered McGuire's "Big Cajun" and "Big Bayou" burgers which were a 1/2 pound of ground beef stuffed with cheddar and jack cheese, battered and deep fried. The "Big Cajun" was also stuffed with hot sausage and topped with their Cajun sauce, whereas the "Big Bayou" included bacon and was topped with BBQ sauce.  Both burgers were served on a toasted Kaiser roll with a large helping of curly fries on the side. Neither Anne nor John were able to finish more than half of their mammoth burgers, but they both enjoyed them immensely.

Anne (a woman after my own heart) was still in the mood for some dessert and since McGuire's didn't offer anything made in house, we decided to hop in the car and cruise up St. Charles Avenue for some tasty cupcakes at Pralines by Jean.  We took our selections back to my apartment to enjoy with some coffee I had purchased from Cafe Du Monde. With a hot cuppa joe in hand, we sampled each other's cupcakes: Peanut Butter & Chocolate, Vanilla & Chocolate and Pralines & Creole Cream Cheese.  All were delicious and moist, a sugary sweet ending to a supremely greasy cheat.
Written by Unknown
Email ThisBlogThis!Share to TwitterShare to FacebookShare to Pinterest

CUPCAKE!!!! I totally want a cupcake after reading this... *tear

We'll get some more one day soon...or perhaps a King Cake from Sucre? ;)