House of the week: Double Gallery on Governor Nicholls 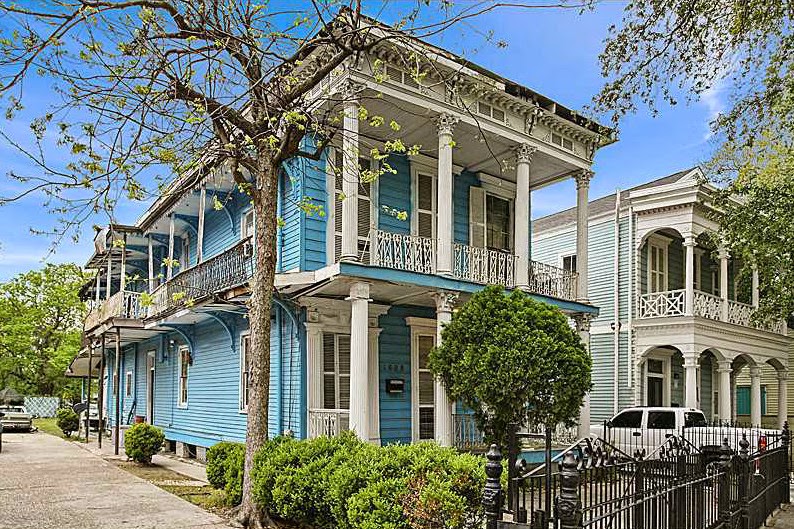 In an effort to prevent a complete mental and emotional breakdown, I've lately searched for homes utterly out of my financial reach during my weekly, online forays into New Orleans' available real estate. Even with these preventative measures in place, I can't help but feel a twinge of pain when I stumble upon a listing like this.

Located in the historic Treme, right near the I-10, is this gorgeous old mansion called The Louis Chalon House. Built circa 1860 by Louis Chalon (son of Joseph Chalon, one of the wealthy "gens de couleur libres" or free people of color), this is a classic double gallery home featuring Corinthian columns and cast iron railings. This huge house sports eleven bedrooms, eight bathrooms and over 7000 square feet of living space.

Although it is in disrepair, this Grand Dame should not go by the wayside. It still has stunning architectural details like pocket doors, ceiling medallions, Victorian mantles and original hardwood floors. If you're into restoring beautiful old homes, I would encourage you to snap up this lady listed at only $399,000 and make her dance again. I certainly wish I could!
Written by Unknown 1 comment:
Email ThisBlogThis!Share to TwitterShare to FacebookShare to Pinterest

Taj of blah, meh and totally so, so 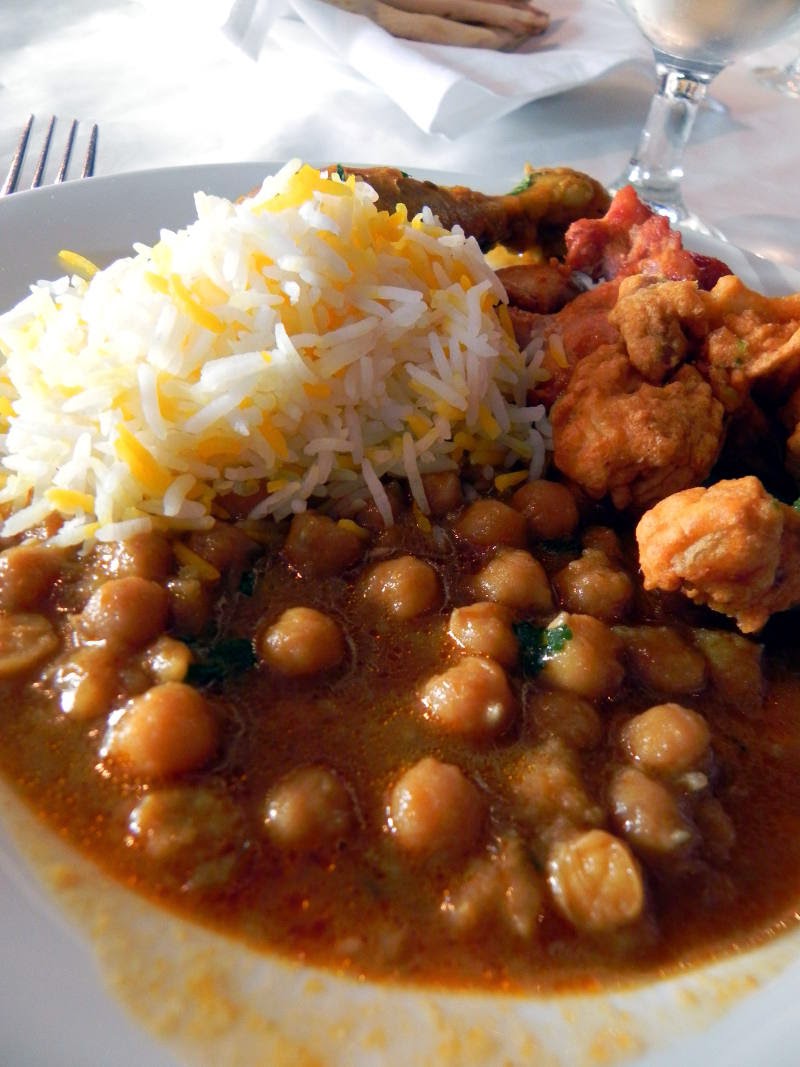 Writing about restaurant visits that are really not worth writing about is very taxing. It's depressing to make an effort discussing a place that couldn't care less what quality of food they put out and it's heart-wrenching, not to mention seriously agonizing, to bust out the cash to pay for it. So now I have to talk about it?

A month or so ago, my friend Lorin and I visited the recently re-opened, reincarnation (not) of Sarah's Bistro on Dublin Street called Taj of India. When I stepped inside, I noticed that the restaurant looked almost exactly the same as the last time I'd been there, several years ago, only they squashed the already-squashed tables together even further to allow for three large buffet tables in the back. There were a few more patrons than in previous visits, but the restaurant was largely empty.

After selecting a table, we headed straight for the buffet where I scored a plate and loaded it up with rice, veggie pakora, and chana masala (a chick pea curry). I also got a couple pieces of yellowish tandoori chicken and a few spoonfuls of raita. When we got back to the table, they served us a basket of warm naan and the server/owner encouraged us to eat up.

Here's the depressing part: While nothing we ate was "bad" per se, nothing was actually "good" either. Bland, a word I've never employed to describe any Indian cuisine I'd ever eaten in my entire life (California has some amazing Indian restaurants), was completely and utterly appropriate. Other words come to mind like "lukewarm," "dry," and "flavorless," but now I'm just repeating myself.

Will the best Indian food I ever eat again in this town come from a jar? Needless to say, I won't be back to try dinner...

Written by Unknown 4 comments:
Email ThisBlogThis!Share to TwitterShare to FacebookShare to Pinterest 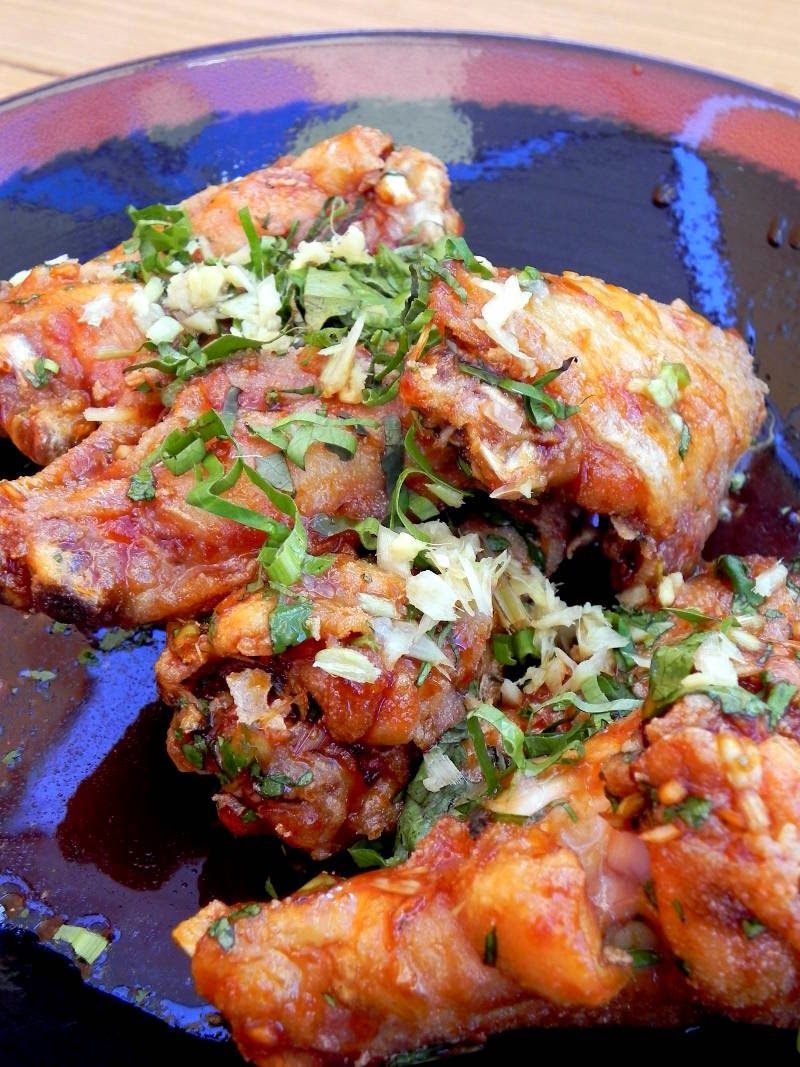 Anne, John and I visited MoPho a while ago, right in the first week of its opening and yes... it's taken me this long to write about it. Am I lazy? Am I a slacker? Perhaps, but I only seem to sacrifice my own blog when I'm feeling in the mood to do absolutely nothing.

But this week, this week I am on a mission and I really hope this drive carries on into the following weeks because let's face it, there's a lot of stuff I'd really like to get done. So, without further ado...

MoPho is located on that weird corner of City Park Avenue, right behind the Burger King. When visiting MoPho, be warned that parking in the Burger King parking lot will indeed get you towed, so park wisely. But I am sure y'all have been there by now... at least you better have!

We sat outside because the restaurant was packed full even though it was a tad late in the lunch hour. It was a bit chilly, but we suffered on, determined to enjoy ourselves regardless of the weather. We started out with a couple of appetizers that arrived at the same time. The Crispy Chicken Wings with lemongrass and ginger were incredibly wonderful (and I really am not a fan of wings), the sauce they wallowed in at the bottom of the bowl was so good in fact, I wrote about it's possible use as a body sauce in another article. We also had a plate of Crispy P&J Oysters with "Mopho mayo" that was equally fabulous, the oysters being rather plump and juicy. We gobbled them both down just in time for our entrees. 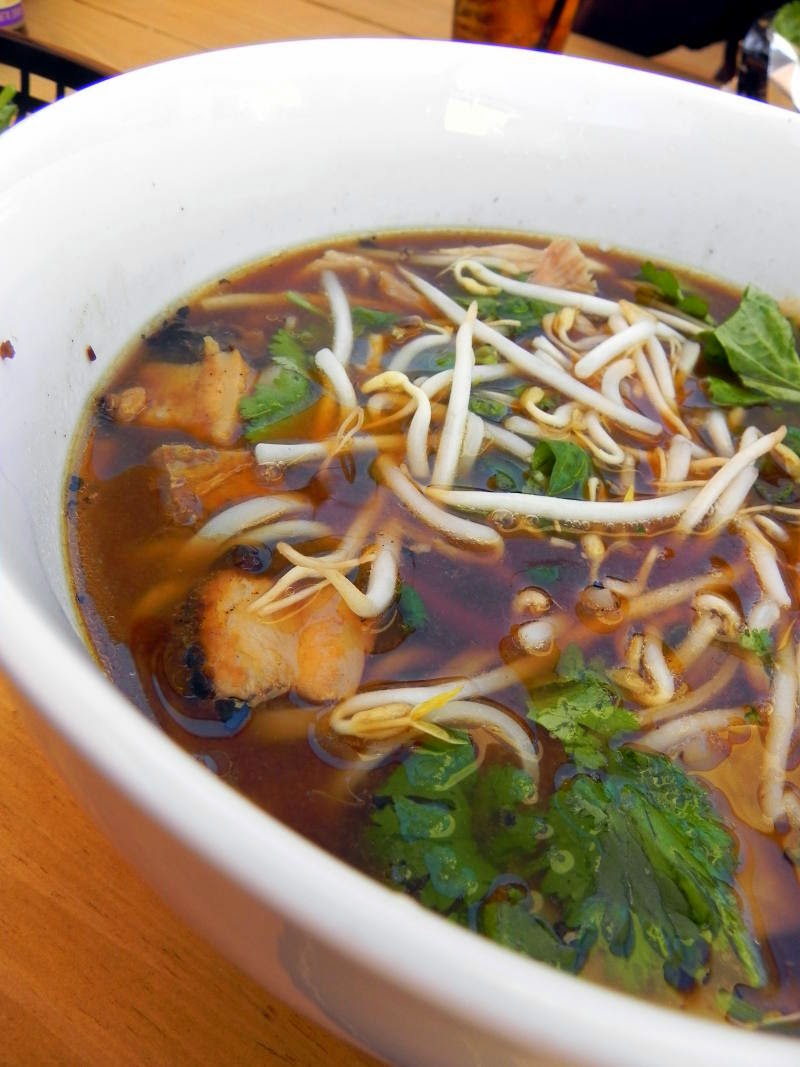 Anne and I both had pho. I got beef broth with duck, pork belly and mushroom. I don't recall what Anne ordered exactly, but I am pretty sure she also chose the beef broth with pork belly. Two things disappointed me about the pho. First, there was barely any meat. I got one bite of duck, one of pork belly and the rest was mushroom. I suppose I could have loaded it up (double that belly!), but still...it made me sad. Second, the broth was lacking the beefy depth and richness I've experienced at my favorite Vietnamese spots and Anne agreed with me. BUT! You must keep in mind (and I did) that this was their first week of opening and it's entirely possible that the chefs still hadn't quite got the hang of making a great pho broth. Foodie friends of mine thought the pho was perfect, so I will have to return a few more times before my judgement of the pho is definitive.

John ordered a "sloppy" roast duck banh mi and although it was juicy and overflowing with fresh veggies, the quantity of meat was seriously lacking and it was in no way sloppy. Certainly not like a sloppy roast beef po-boy where you need to wash up afterwards. I'd be surprised if John used more than one napkin on the whole sandwich. 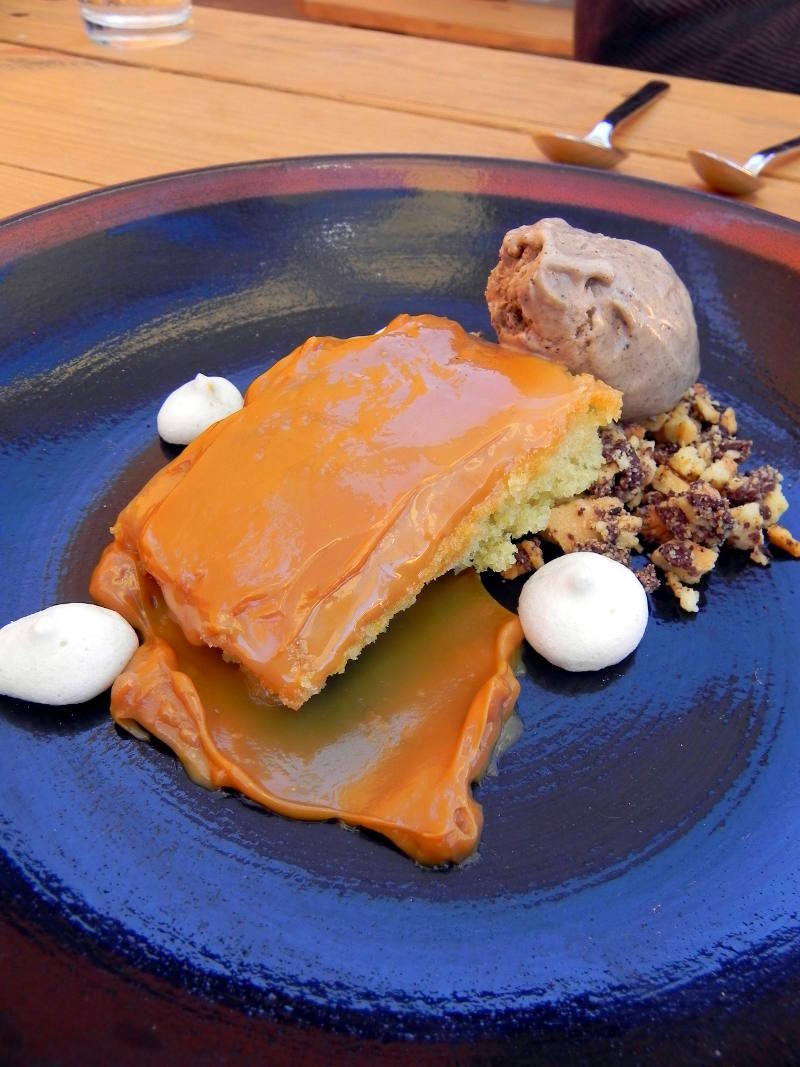 All in all, though there were some disappointments, almost everything tasted quite good. Not to mention, while we were waiting for our table, we saw all kinds of dishes coming out for other diners that looked and smelled quite stunning, so we will definitely be back to try again.

House of the week: Victorian on Dumaine Street 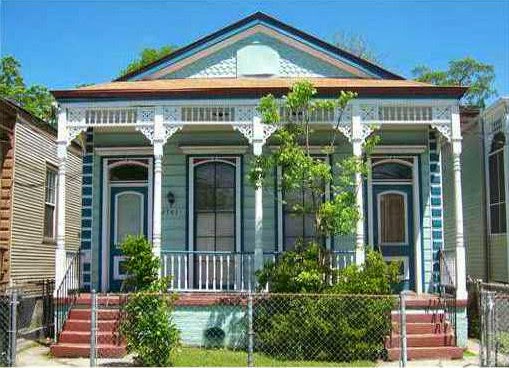 As I am currently existing in some kind of first-time home-buyer's limbo (a.k.a. financial consultations, credit checks, home-buying courses, etc.), I've been reluctant to play out my usual "house of the week" game. Why? Because I keep finding homes in my price range that are almost exactly what I want, only to watch them slip right through my fingertips. Just like what will happen with this one...

About a block off Broad Street on Dumaine is a double-shotgun Victorian house built around the 1920's. The owner's side features three bedrooms and one bathroom and the rental side is two bedrooms and one bathroom for a total of almost 2000 square feet. It's got all the goodies I love, on both sides. We're talking fireplace mantles, floor-to-ceiling windows, transoms, sliding pocket doors and hardwood floors ... plus a cute porch and a rather large backyard. The house is almost smack-dab between the Fair Grounds Race Course (read Jazzfest) and the French Quarter (read, well...it's the freaking French Quarter already), the New Orleans Museum of Art, the Degas House, Pagoda Cafe, the Caribbean Club and Broadview Seafood (read "boiled crawfish").  Also, a Whole Foods recently opened up on Broad Street not seven blocks away, in attempts to kick-start the neighborhood and offer a place for affordable, healthy food.

There are lots and lots of reasons I can come up with about why this house is so cool, but the most glaring would have to be the price. This little beauty is listed for only $199,000 and it makes me want to cry. Wave buh-bye now...say buh-bye to the pretty little house because soon it will be gone.

Waking up at HiVolt Some days, like today, I must rise at an hour where one would normally find me snoozing away merrily in bed. On these unfortunate days, I need a healthy overdose of caffeine. Not too long ago, my good friend Anne and I visited a great place for a coffee infusion, especially early in the morning.

Opened a few months ago by Benji Lee (who also owns The Saint just down the road), HiVolt Coffee is a cool new cafe situated on a funky corner at St. Mary and Sophie Wright Place. The cafe is housed in a building that once was a seafood restaurant and the cool porthole windows still remain. HiVolt has a modern, sleek and clean design on the inside, making it highly inviting and not too focused on catering to one group of coffee snobs or another.

Anne was following a paleo diet at the time and the folks at HiVolt were happy to accommodate. They used almond milk in her Chai while I ordered a delicious cappuccino (with whole milk) brewed from Counter Culture Coffee. We sat down, sipped our beverages and waited patiently for our orders to arrive. 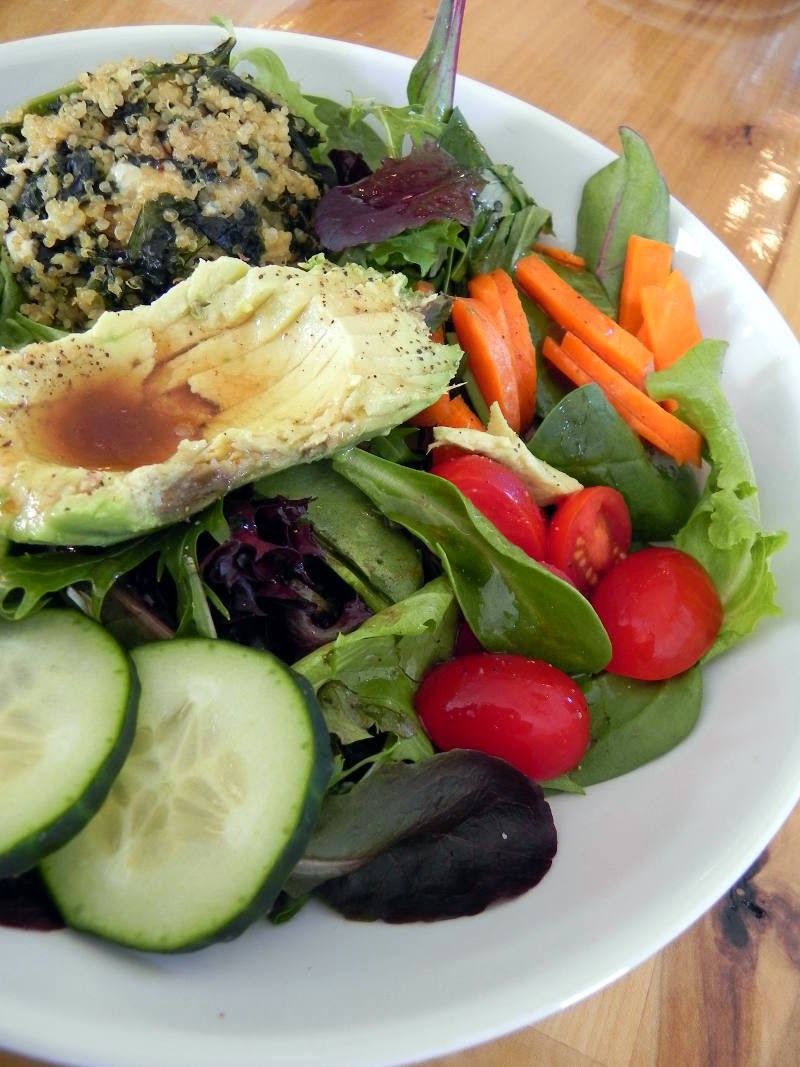 Anne got a Chimi Beef Salad, mixed greens and tomatoes topped with slow-roasted chuck, a perfectly poached egg and lots of chimichurri sauce. I chose their simple house salad with mixed greens, avocado, tomatoes, carrots, cucumbers and a tasty quinoa spinach cake served on the side. Everything was so fresh and scrumptious, we gobbled the salads gleefully and moved on to a couple of sweets.

Anne chose an interesting seed bar bound by raw honey and I tried a gluten-free, Mexican Chocolate donut, simply because I didn't believe it was possible. Although the donut was rather dry, the spicy chocolate flavor was all there and I had no trouble washing it down with my coffee. Anne's seed bar turned out to be fabulous, crunchy and sweet, yet far more filling than either of us imagined.