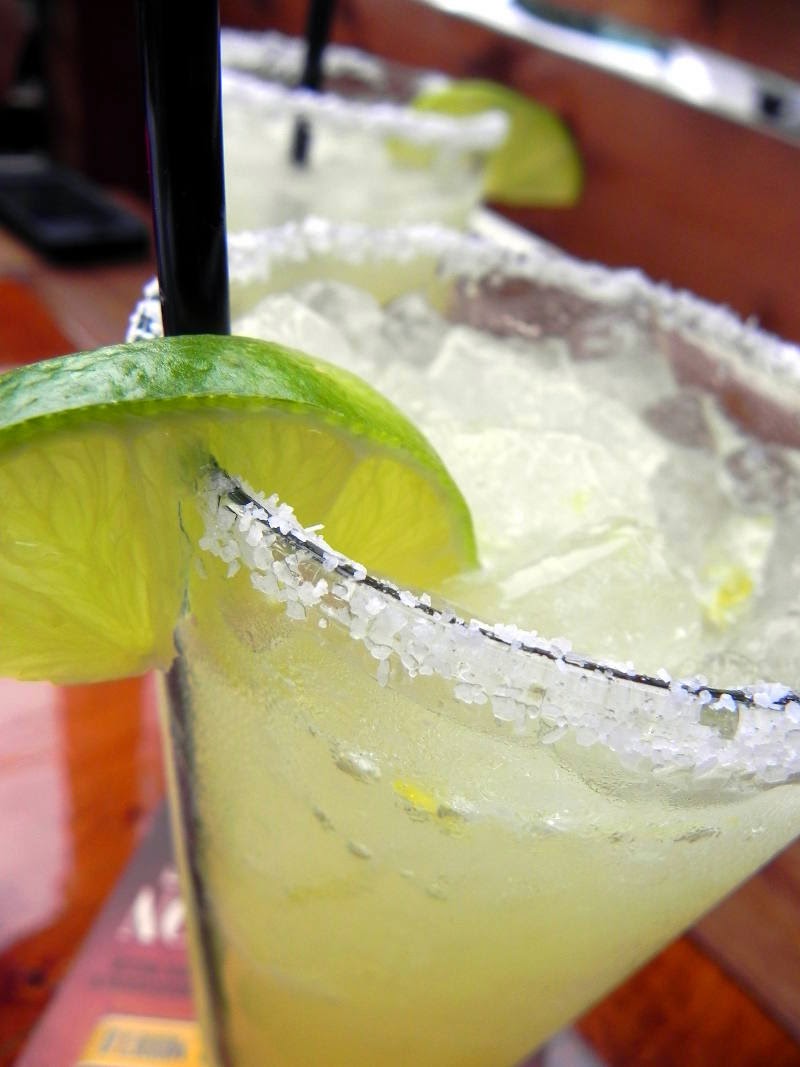 I'm ecstatic that New Orleans has finally upped its game when it comes to Mexican cuisine. If anyone asked me what I missed most about living in California, other than the fact that my whole family lives there, I would have to say two things: 1) the Pacific Ocean and 2) Mission burritos. Thankfully, a man after my own stomach, owner David Wright, opened Del Fuego Taqueria early this summer bringing the Mission burrito to the Crescent City.

A few months back, John and I visited Del Fuego Taqueria for the first time and in case you were wondering, I've been back many times since.  Located on Magazine Street just a hop from Napoleon Avenue, Del Fuego offers both indoor and outdoor seating and, on this particular occasion, John and I opted to sit outside. We kicked off our dinner with a couple of perfectly delicious, house Margaritas made with Souza Blue Silver and house made triple sec and fresh "limonada" or lemonade decorated with a heavy, salt rim.

First out was their "loaded" guacamole that was like a cornucopia of all the good stuff you can put in guac ... plus a little bit more. After feasting on crispy, fresh tostada pieces weighed down with fresh avocado, chicharrones (Spanish for "cracklins"), tomato, onion, cotija, roasted poblanos, pumpkin seeds, bacon and pomegranate seeds (yes, I said pomegranate seeds), we were actually quite full. Nonetheless, we were still determined to try at least a bite or two of our entrees before we asked them to box it all up. 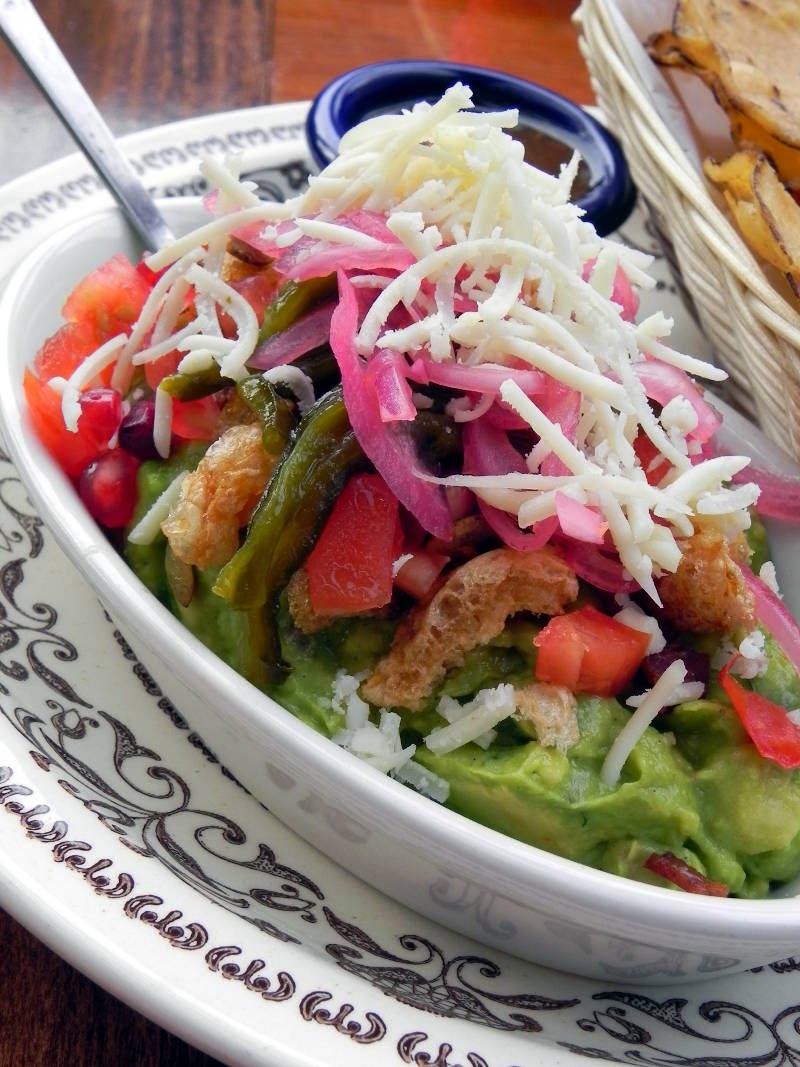 John got the "Cochinita Pibil de Costenos" which translated to mean a half-rack of St. Louis ribs that were slow-cooked in banana leaves with an achiote-spice rub and served with a side of black beans and pickled onions. The ribs were wonderfully heavy with heady spice and practically falling off the bone.

Seeing as I've raved about them in the past and missed them oh-so dearly, I simply had to have a Mission burrito. I chose the carnitas filling (slow-cooked and fried pork) that was also accompanied by the traditional Mission-style ingredients which include pinto beans, rice, queso, crema (or sour cream), salsa fresca, avocado, onions and cilantro. Let me tell you, it was like taking a bite of home. If my dish had a few whole, pickled jalapenos, sliced onions and carrots, all I would have had to do was close my eyes and I'd feel like I was sitting in front of La Cumbre. Thank you Mr. Wright, you have no idea how happy you've made me...

House of the week: Cottage on Chestnut Street 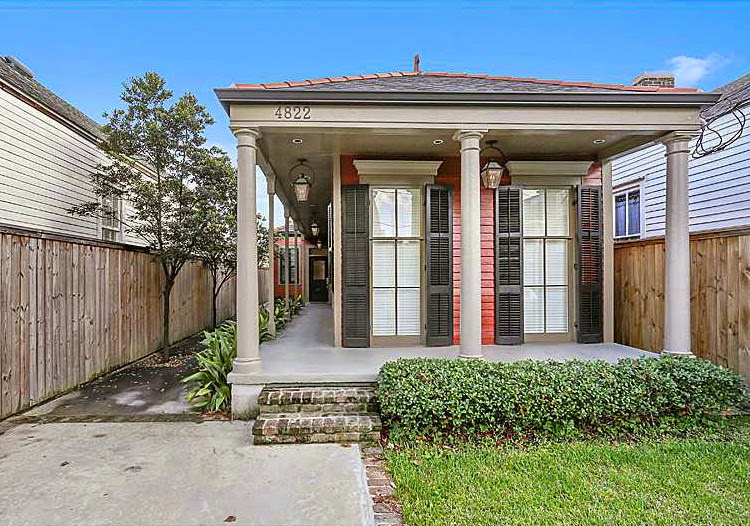 Throughout my torture sessions over the past few years, there's a trend I'm noticing that causes my heart to shudder. While I understand the desire for a new-built home, it makes me crazy when people buy an old house and renovate it so drastically, that they kill all its precious character. I mean, why live in a classic New Orleans house and then take all the New Orleans out of it?

For example, here is this incredibly expensive, one bedroom/one bath cottage on Chestnut Street. Notice the floor-to-ceiling windows and the lovely, columned porch that runs all the way to the front door. Well, that's where the character ends. Inside there's a sprawling kitchen and living room, replete with shining hardwood floors and glistening granite counters, but it looks nothing like a Nola abode anymore. No exposed brick, free-standing fireplace, intricate mouldings or ceiling medallions. The bathroom is shiny and new without a claw foot tub, wainscoting or intricate tiling that runs halfway up the walls.

It's Crescent City character has been almost completely wiped out, yet because of these modifications and it's excellent location Uptown, this 1,200 square foot house (with only one bedroom, mind!) is listed at $439,000! No way Mr. Man! Even if I did have the ducats, I ain't buyin' it!
Written by Unknown No comments:
Email ThisBlogThis!Share to TwitterShare to FacebookShare to Pinterest

Sips and snacks at Ivy 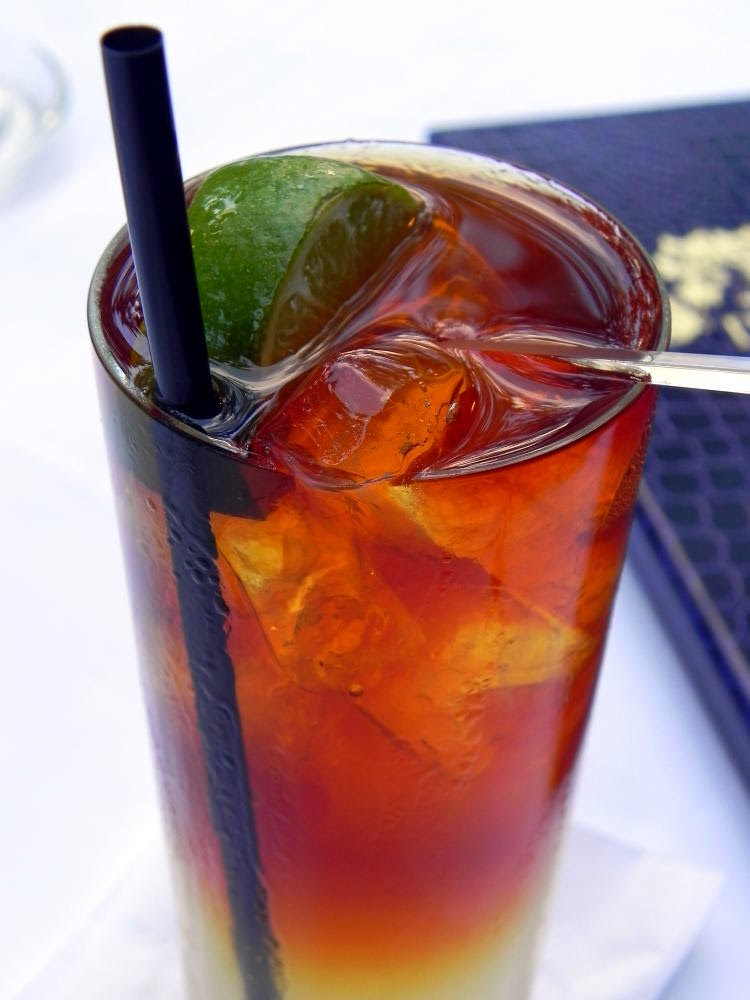 While I have not yet acquired the funds needed to dine at Gautreau's, I did get the opportunity to taste Chef Sue Zemanick's highly capable cookery a few months ago at the recently-opened Ivy. One balmy afternoon, I met a new acquaintance for a few bites at the Magazine Street restaurant (gastropub?) and thoroughly enjoyed it. I only wish I could have afforded to try more...

We chose to lounge outside and immediately ordered a couple of drinks. My DC opted for a French 75 with gin, lemon juice and champagne, while I chose their version of a Dark & Stormy with dark rum and ginger beer. We sipped the cool drinks while the sun made its decent towards the horizon and talked about our love for a city that was not, technically, our home town.

About halfway through our cocktails, the small plates arrived one-by-one, the first being house made potato chips with a French onion dip. They were perfectly crisp and not even a tad bit greasy, but we devoured the small portion faster than you can blink, though we left a lone chip in the bowl, neither of us willing to deny the other another taste. Next up was a Hamachi Crudo with fennel, grapefruit, and basil, a dish that light and refreshing, perfect for a mid-summer afternoon. For that dish, there was a scramble to devour every bite and neither of us "played the lady," leaving not a single morsel on the plate.

Our last dish was Pimento cheese-stuffed Boudin balls with Creole-cane syrup, of which there were three. Although we graciously split the last, so each of us enjoyed one and one half, I couldn't help but be reminded about my appetizer pet peeve. You see, I have this sinking suspicious that chefs serve dishes in odd numbers forcing you to order twice as much to have an even number of portions. The Boudin balls were delicious, but not enough to cause us to order more.

Overall, I though the food and drinks were quite wonderful, but everything was drastically over-priced. $10 for a plate of crudo that altogether wouldn't equal more than two mouthfuls? $7 for a small handful of potato chips? $11 for three Boudin balls smaller than ping pong balls? Frankly, I'll have to wait for someone with a lot more expendable income than I to take me here again, but I am glad I got to experience even this little bit just once. 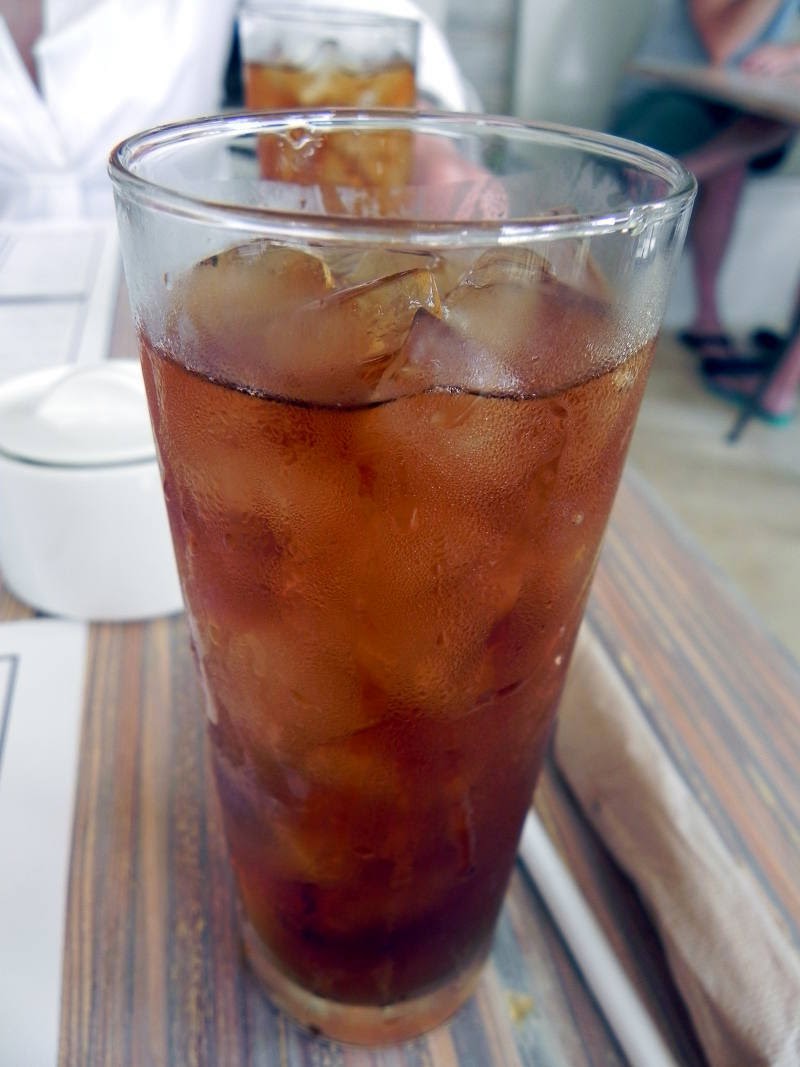 As y'all probably have guessed, I'm a meat-eater. As a die-hard carnivore, I doubt I could ever subscribe to the vegan diet, there would be far too many foods I would miss too damn much. That being said, I'm certainly not opposed to eating vegan (or even raw) for a meal. That's probably why I suggested Seed when I met my good friend Jeanne for lunch a few months back.

Although Seed replaced one of my favorite lunch spots less than six months ago, I couldn't help but be intrigued by a menu where all of the dishes were either vegan or raw, and sometimes both! We arrived at the restaurant at around 1pm thinking we'd avoid the main rush, but the place was still jumpin' and we were lucky to score a two-top before a large queue formed at the front door.

Although it was difficult to decide, Jeanne and I finally placed an order and looked around while we waited ... and waited ... and waited ... till the usual jokes arose -- "guess the chef had to kill the cow first" -- but in this case we were baffled. Everything we ordered was raw ... meaning uncooked ... meaning what the heck was taking so long? As we glanced around, we realized that no one else was eating either. Everyone was just sitting around, sipping their drinks (we got a lovely iced mint tea, by the way) and conversing like there was absolutely nothing amiss. 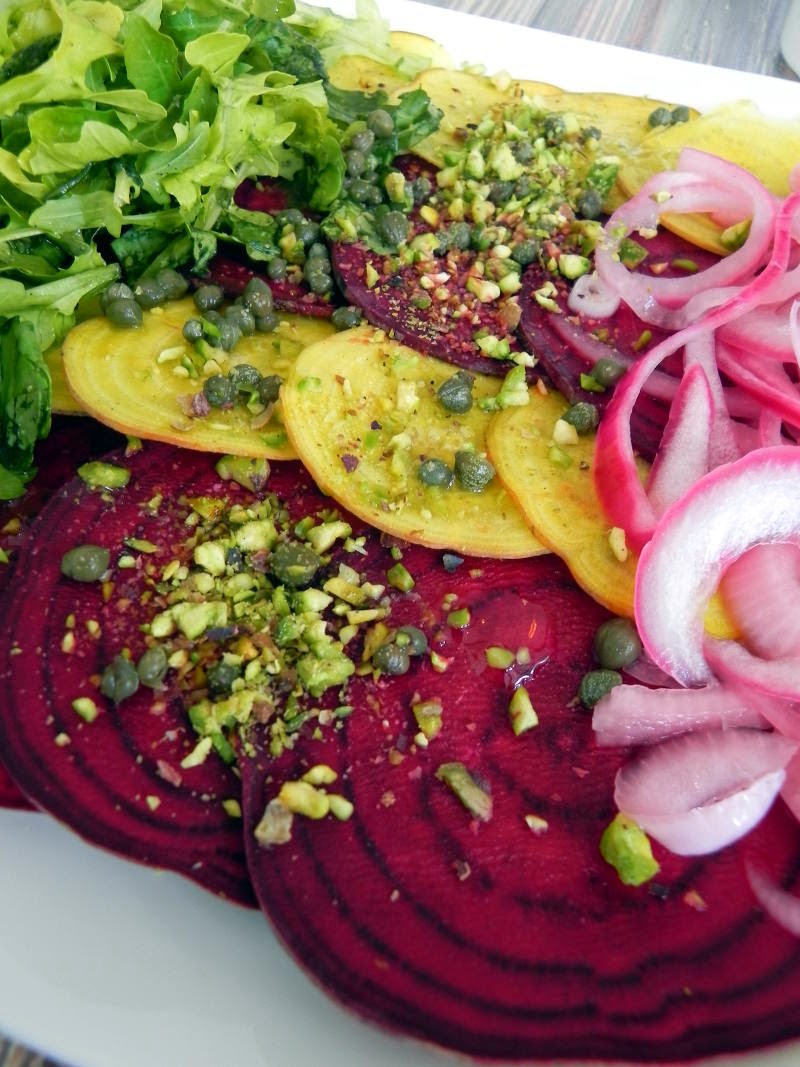 Now, I was willing to give them a little leeway, seeing as they hadn't been open very long and were likely working out some kinks. But a 45 minute wait for raw food? That's a pretty big kink. Jeanne and I cheered when they finally brought out our appetizer, a Beet Carpaccio, that was visually stunning. Both red and gold beets were thinly sliced and served with red onions, capers and crushed pistachios all drizzled with grape seed oil. Although the flavors were fresh and bright, the tough texture of the raw beets sort of threw Jeanne and I for a loop. They were sliced pretty thin, but not thin enough to make this an appetizer that was easy to eat. Maybe if they cooked them a bit?

Our entrees arrived in a somewhat timely manner (the waitress forgot about mine), and these were the highlight of the meal. Jeanne opted for the Seed Club Sandwich which featured hummus, avocado, tomato, sprouts and garlic aioli on toasted, whole grain bread. She enjoyed it thoroughly, which was obvious through the groans of delight that she uttered while chewing, and it presented quite well. It was the kind of sandwich that is perfect for a healthy eating ad, "delicious AND good for you!" 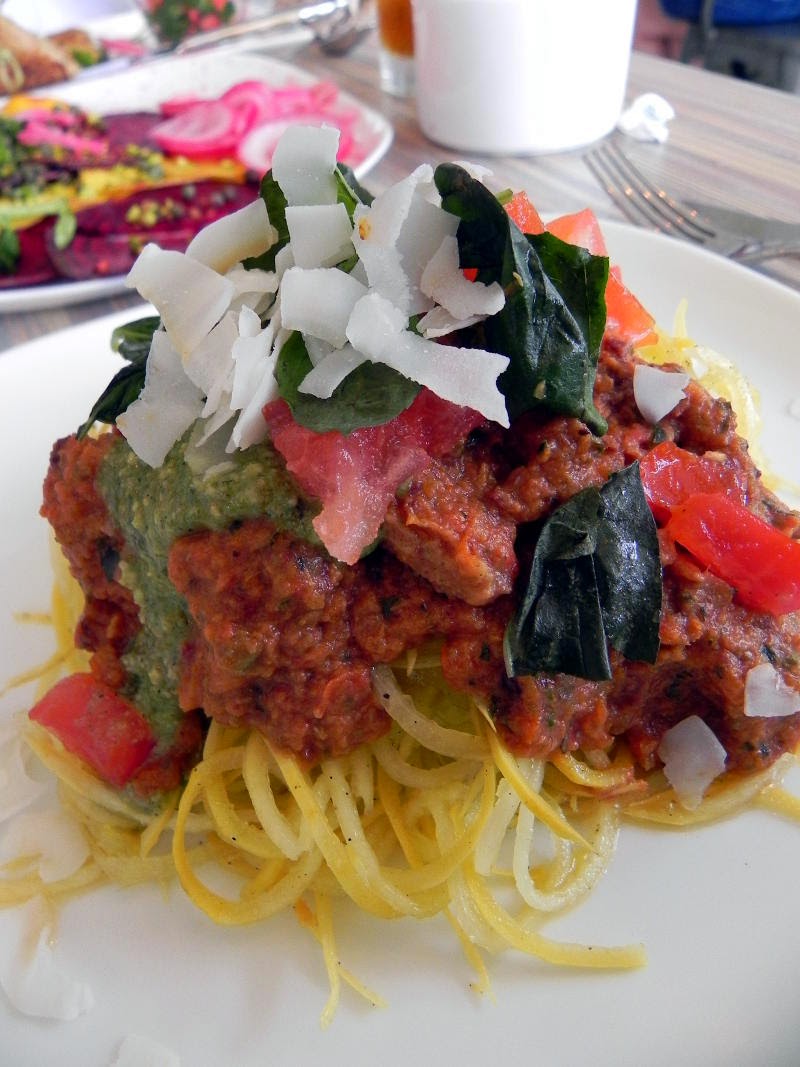 I thought my entree was the star of the show, a vegetable spaghetti with spiralized veggie noodles, avocado pesto, puttanesca sauce and shaved coconut to garnish. The flavor was outstanding! I had difficulty believing that my meal was completely vegan, and the fact that it was completely raw to boot was staggering. The puttanesca was so bright and rich, with tomatoes, olive oil, capers and garlic, and the noodles were cool and light, completely absorbing the flavorful sauce. I was completely blown away and I assure you, I could devour that dish daily.

We finished off the meal with a little dessert, a raw mint ice cream composed mostly of frozen banana. It was not too sweet and super-minty which worked on a hot summer day, but it certainly failed to give regular ice cream a run for its money. All in all, if you're a vegan or vegetarian in New Orleans, Seed is your home away from home. If you're not, its still pretty darn good, but I suggest exploring the menu to find your favorite dish. Seed's biggest fault? I mean, aside from a deplorable wait (that I hope had been rectified since my visit)? I walked out still feeling hungry.

Time to seek out a steak...