A couple of days ago, I had the honor of being invited to my first ever wedding since moving here more than seven years ago. The young couple had been planning and saving for this occasion and after two years, the fateful evening had finally arrived.

Now, what struck me most about this wedding and what I want to share with you is how "New Orleans-like" this special event actually was.

For starters, the ceremony and reception took place in the heart of City Park's Botanical Gardens. It was a gorgeous setting (albeit cold evening) and the happy couple exchanged vows underneath grand oaks dripping with Spanish moss. 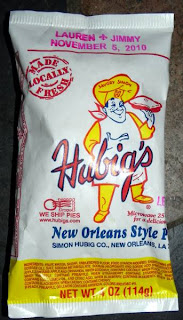 After the vows were made and their first kiss as husband and wife had been witnessed by one and all, the guests filed into the many-windowed pavilion and the party began.

Not only were there liberal amounts of alcohol being poured with the notorious heavy-hands of New Orleans' bartenders, there was a ton of local cuisine laid out on several tables around the hall and passed around by servers bearing large silver trays.

There were boiled shrimp, deep fried shrimp, deep fried bacon-wrapped oysters, bite-sized hunks of fried catfish, mini-crab cakes and more! At no other wedding I have ever attended (and believe me, there have been quite a few) were there so many delicious fried goodies to be had. I was stuffed before I could even visit one of the food-laden tables!

A local cover band playing a string of well-known 80's tunes kept the revelers entertained and even started a second-line led by the new couple that encircled the hall several times before petering out. And, to my great surprise, the band led the crowd in a "Who Dat" chant with plays from the 2010 Superbowl appearing large as life on huge video screens behind the drummer. The people went wild, jumping up and down and yelling praises to our beloved Saints whose great accomplishment will never be forgotten. Only in New Orleans would this kind of behavior seem normal, even at a wedding reception.

As John and I were walking out of the hall at the end of the night, I noticed a huge table filled with Hubig's Pies that had been personally stamped to celebrate the union of the newlyweds. How much more New Orleans can you get? It's an experience I will never forget.

Congratulations Jimmy & Lauren and may you live happily ever after!
Written by Unknown
Email ThisBlogThis!Share to TwitterShare to FacebookShare to Pinterest

How awesome can it get?;-D