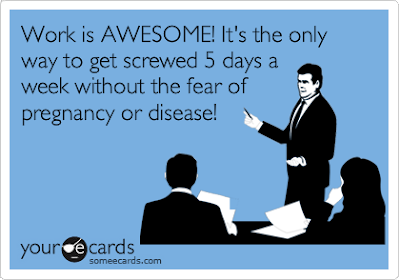 While staring at the cursor, flashing in its own mind-numbing way, I tried most strenuously to write about what I enjoy writing (and raving) about, New Orleans' food. But it wouldn't come out. The cursor kept right on blinking while my mind kept right on churning about a recent scrape.

Y'all don't know how difficult it is for me to write right now. My brain is playing this horrid game of back-and-forth between "Kim, just get it out, you'll feel better" and "Don't be such a Debbie-downer. No one wants to read that shit!" While I desperately want to talk about a great local restaurant, I'm so incredibly bummed that I let myself get crapped on ... yet again ... that I'm really not in that warm fuzzy-kind of mood. So here it is:

For free, I submitted 12- 100 word write-ups to a company once called Chowzter (now FoodieHub) on different dishes I thought people visiting New Orleans ought to try. The pitch to me was that they had designed an app and that once they stopped giving it away for free, I would receive 50% of the apps sold in New Orleans. My expectations were not high, but I thought it was a small price to pay to be included in this vast community of exuberant food lovers from all over the globe. Honestly, a lot of the people I've met through Chowzter are amazing photographers, writers and epic gourmands who have educated me on the cuisine of places I've never visited, and if my luck keeps running this way, likely never will.

In order to establish presence in different countries, Chowzter held frequent awards ceremonies in cities like London and New York ... they even came to New Orleans and feasted at places like Parkway Bakery, Brennan's, Commander's Palace and more, exploring what our city had to offer. It pleased me to to see them revel in my home and grant awards to not only the city, but to Coquette in particular for their Smoked Pork Gumbo, which I nominated for consideration in "The Tastiest Feasts of North America." I also wrote a few articles for their newsletter (for which I was paid, thank goodness) on po-boys, Creole vs. Cajun cuisine and our killer Carnival confection, king cake.

Just recently, I was going through my emails to discover that there was another awards ceremony, the "FoodieHub Global Awards" for which Willie Mae's Scotch House won "The Tastiest Fried Chicken in the World" on my nomination. What's so disturbing about this news was that I never submitted a nomination for anything. Additionally, I didn't submit the photograph they used on the FoodieHub website, although it most definitely is mine.

So here's what happened. Because I never responded to the nomination request for the "FoodieHub Global Awards" (emails I discovered in my junk box after-the-fact), someone over there at FoodieHub decided to take a photograph from my blog and nominate Willie Mae's for me. So kind of them, don't you think? Not only that ... they took the articles that I wrote on po-boys, etc. and re-purposed the images and words into 100-word clips for the app.

When I finally worked up the nerve to call them out on this egregious error a few days later, I got nothing but push back -- "But we sent you the nominations email and you never responded" and "here are the emails we sent" -- all of which had no bearing on the fact that they essentially stole from me, used my name without my permission and thought it was okay.

Don't get me wrong. I'm glad Willie Mae's won, that the restaurant and our city got a little extra global recognition, but I really wish someone would have asked me first.
Written by Unknown 2 comments:
Email ThisBlogThis!Share to TwitterShare to FacebookShare to Pinterest

Guess that restaurant! Round 2

It's that time again, time to play "Guess that restaurant!" I made it way too easy last time for all you seasoned, New Orleans foodies out there, so not hint this time! Go on, guess! 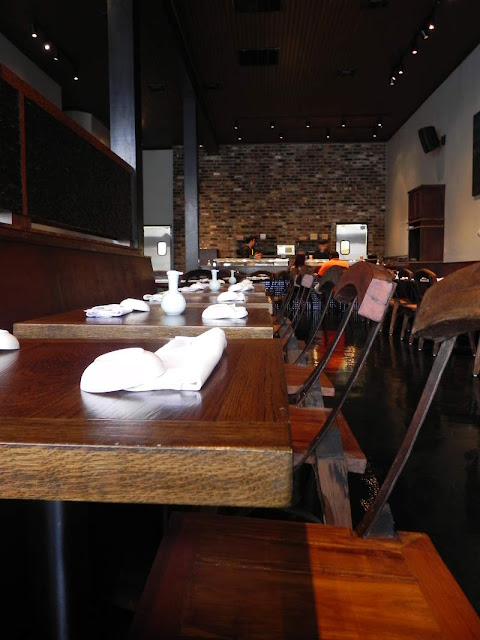 House of the week: Historic home on Atlantic Ave. 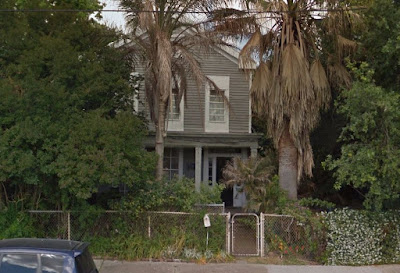 If I had lots of extra cash and experience restoring homes, I would love to buy this house on Atlantic Avenue in Algiers and bring it back to its former glory. Not only is it on a lot twice as large as the properties that surround it, it has all the classic details that cause me to swoon.

Just check out that huge front porch, floor-to-ceiling windows, original hardwood floors, the unique architectural accents around the windows and doors, wainscoting, fireplace ... I wish there were more pictures. The shot I have here was taken from the Google Maps Street View and offers a bit more than the pictures alone. Fortunately, someone has already put a bid on this house that's listed for a mere $150,000. I sure hope they don't ruin it.
Written by Unknown No comments:
Email ThisBlogThis!Share to TwitterShare to FacebookShare to Pinterest

Po-Boys to suffer for at Avery's on Tulane 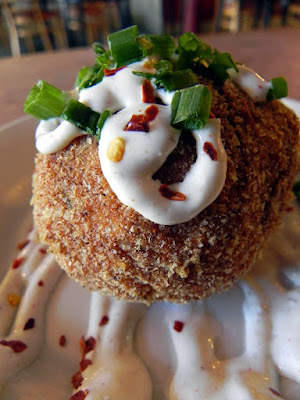 Ever since I got arrested on Lundi Gras oh-so many years ago, I sort of dread being anywhere near the ominous courthouse at the Broad and Tulane intersection. Fortunately (or unfortunately?) it seems that I need to get over that particular bad taste in my mouth, because there are too many good tastes to be had (and many more to come) in this growing corridor. A little while back, I sucked it up and took John to lunch at Avery's on Tulane, a po-boy spot that I discovered from a visitor to our fair city who regaled a tale about an incredible roast beef. I simply had to go find out for myself, after all -- what would a tourist know about roast beef po-boys? Apparently, he knew a lot...

Located less than two blocks from the dreaded courthouse and prison, Avery's has been open for three years now and I feel like a failed foodie for not knowing about their deliciousness earlier. John and I stumbled in, incredibly hungry, and grabbed an open table. Avery's is super casual, a low-key po-boy joint with local art on the walls and a gator mural beneath the counter. After seriously debating our choices, we finally ordered lunch and sat back to wait. 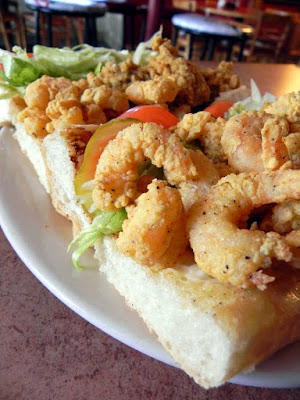 Though it may be odd to order an appetizer at a po-boy shop, we simply had to try their Fried Potato Salad. A large, ball-shaped scoop of a basic potato salad (with bacon!) was breaded with Leidenheimer po-boy bread crumbs and deep fried. We gobbled it all too quickly, which shows how tasty that particular experiment turned out to be.

Then, with a wailing fanfare that was heard only in my head, our po-boys arrived. John kept it simple with a half and half, that is half fried oysters and half fried shrimp, fully dressed of course. The shrimp were delicious, breaded in seasoned flour and the cornmeal-breaded oysters were equally pleasurable, plump and juicy, right out of the fryer.

I went a little different and tried one of their special po-boys called the "Sandbag." Hot roast beef is topped with fried pickles and provolone cheese to create a po-boy only my wildest dreams could replicate. I'm salivating as I write this, remembering the tangy, crunch of the fried pickles and the heady flavor of the roast beef. Seriously, this is one hell of a sandwich. 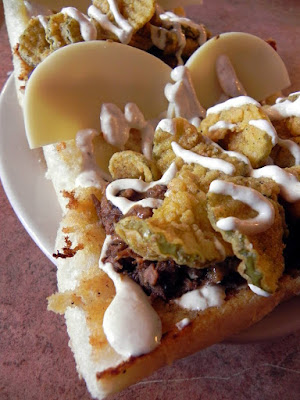 John and I both ordered the large (a.k.a. 12 inch) version of our po-boys, but we quickly discovered that there was no way on this green earth we'd be able to finish more than half! So, we boxed up what was left and proceeded to order dessert. John was groaning at me out of over-satiation, but I insisted we at least try something sweet before we left. As it turned out, Avery's home made bread pudding was just as good as everything else they put out, though it was nothing fancy, just a simple, well-made bread pudding sopping in an added caramel sauce. Were we incredibly full? Yes. Did we inhale every last bite? You bet!

Needless to say, John and I go out to eat a lot. While I am completely focused on the food that's about to arrive, John often takes the camera and shoots random pictures of the restaurant or the scene outside the window and I don't even realize the proliferation of these candid shots until I get home and download the images to my computer.

The other day, I was going through my many, many photos, saw all of the "atmosphere" pictures and thought perhaps there was something interesting I could do with them. So, here's my first tester. Let's play "Guess that restaurant!" Maybe at some point I'll be able to offer a prize to the winner, but for now, just show everyone how observant you are ... you special person you.

Where is this? I think it's only fair to give a hint ... this particular restaurant is in Mid-City. 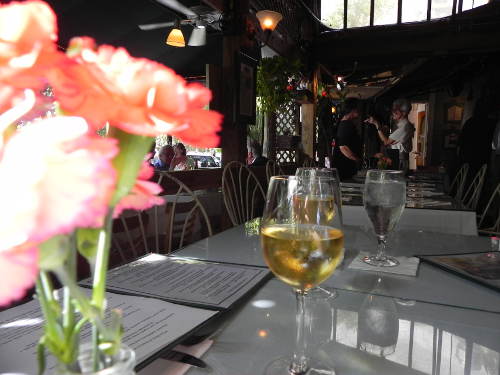 Sticking to the pie at Pizza Domenica 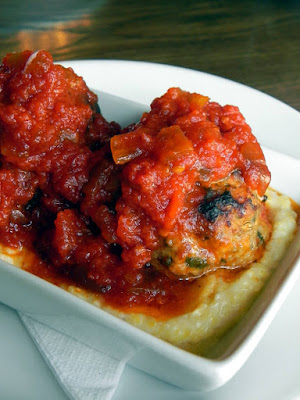 Several months back, my singular dining companion Anne and I hit up Pizza Domenica for the first time. I'd been to Domenica quite a few times and I was curious if the Uptown pizza outpost held up the same commitment and quality as the CBD original, only because in my general experience, sequels tend to disappoint.

Anne and I arrived post-lunch rush so only about a quarter of the tables were filled. We ordered at the counter, as you're supposed to, and sat down to await our bounty. We began with a few appetizers, the first being beef meatballs atop creamy polenta in an arrabbiata (garlic, tomatoes and chili peppers) sauce. As excited I was to sink my teeth in, the flavor of the meatball itself was somewhat bland, but I did enjoy the polenta and the spicy arrabbiata sauce.

The next two apps came together, a tuna crudo with avocado and Mandarin oranges and a shaved Brussels sprouts salad with toasted almonds, golden raisins and Creole mustard vinaigrette. The crudo was somewhat lackluster in presentation and the Mandarins, while an interesting addition, tended to make the whole dish too sweet for my taste. On the other hand, the salad was delicious and we scarfed it up, my only dismay happening in the second-to-last bite that oddly contained a piece of clear plastic. Strange, no? 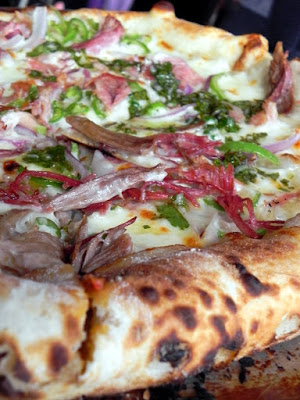 Because the meal seemed a disappointment so far, especially when compared to the excellence at Domenica, I felt ready to give up before the main course. Before I could make up my mind to tell Anne I was pretty much done, our pizza arrived. Anne and I agreed on the Smoked Pork pie with mozzarella, red onion, Anaheim chiles and salsa verde. Thankfully, the pizza was absolutely divine and well-worth waiting for! The crust was thin and crisp and we had no difficulty gobbling the whole pie even after all the appetizers. All in all, I'm hoping I just went on a bad day, but the pizza was certainly worth a return trip.