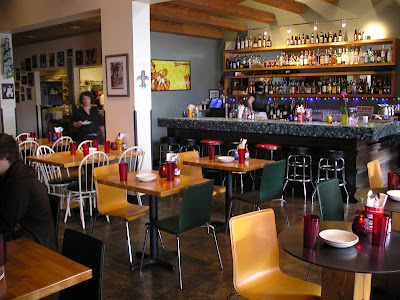 When my good friend Miriam began noticing my food blogs, she sent me an email titled "You probably won't like this but..."

I guess Miriam believed I wouldn't appreciate the existence of a Cajun/Creole tapas restaurant living smack in the middle of Portland, Oregon. Yep, Tapalaya is the name of this fairly new eatery that features small plates of everything we like to eat big; jambalaya, red beans & rice, BBQ shrimp, fried catfish, po-boys and even mac & cheese.

Owner Seth Matasar, the mind behind this madness, had moved from Chicago to New Orleans to attend Tulane University when he was 17-years-old. He lived, loved and worked here for over ten years, most notable was his five-year stint at Commander's Palace. Although he left New Orleans, he still carried his love for the city in his heart and stomach.

Tapalaya has now been open for two years and is still going strong. If you are ever in the Portland area, check it out and let me know how it is! I can have nothing but love for folks trying to spread the fabulous cuisine of our area to other parts of the world.
Written by Unknown
Email ThisBlogThis!Share to TwitterShare to FacebookShare to Pinterest

error in print...John Kincaid is the head chef of Tapalaya, and Seth and Chantal are the owners.

I was not told that the Chef was John Kincaid. Thanks for the correction!

Yay! Please do tell everyone in New Orleans about us! I was born and raised in New Orleans and I cook at Tapalya! And comin from a native, I think it's fabulous! plus the drinks are fabulous times 10!