A late-night tradition: The Trolley Stop 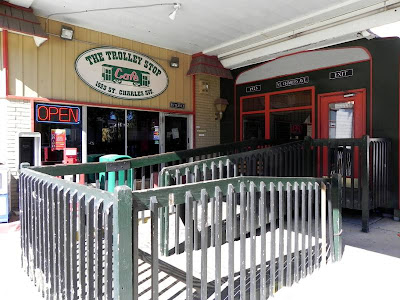 In the wee hours of the morning one Saturday long ago, my friend Casey and I had been partying all night and in desperate need of some vittles. Not really knowing yet what might be available at 2:30 am in New Orleans, I put my growling stomach in Casey's capable hands and she took me to the Trolley Stop.

I will never forget how nervous I was walking into the streetcar-like cafe on St. Charles Avenue that night. Casey still giggles at my reaction to this day. You see, living in California, I had become used to being the minority on many different occasions in both the Asian and Latino communities. Now, I knew darn well that the population of New Orleans was more than 60% African American, but I had yet to fully realize it. 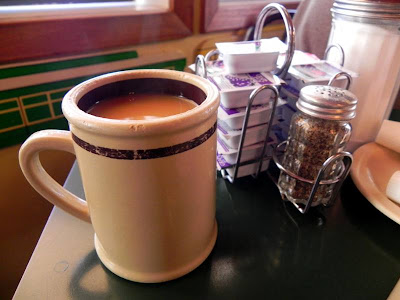 That night when we stepped into the ultra-busy Trolley Stop, it slowly dawned on me that Casey and I were the only white people there. I whispered anxiously to Casey, "Are you sure we're allowed to be here?" and she only laughed.

As it turns out, we had an awesome server, a delicious late-night or early morning meal (however you want to look at it) and began a tradition.  From that point forward, the Trolley Stop was frequently my eatery of choice after a hard night of drinking.

A few days ago, Casey and I visited the Trolley Stop again for my 58th cheat. I am down 75 pounds. 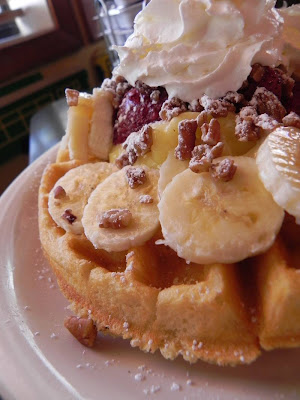 Before the flooding in 2005, the Trolley Stop used to be open 24 hours a day and 7 days a week, but now they are only open 24 hours for Thursdays, Fridays and Saturdays. Since we arrived around lunch time, it didn't matter in the slightest, but I was a little sad to note that had changed.

Although I was tempted to order my usual breakfast item (the French Special), I thought it would be fun to "relive" my very first order at the Trolley Stop, a Banana Split Belgian Waffle, while Casey opted for Pigs in a Blanket. Keep in mind, in no way are you are limited to breakfast items at this cafe. The menu is overwhelming, listing almost anything you would think to find in any diner across the country, plus a nice selection of New Orleans-centric items like po-boys and gumbo.

It wasn't long after I received a steaming hot mug of coffee that my dish arrived. Piled high with sliced bananas, strawberries, pineapple filling and a hidden cache of Bavarian custard, the waffle was as indulgent and delicious as I remembered. 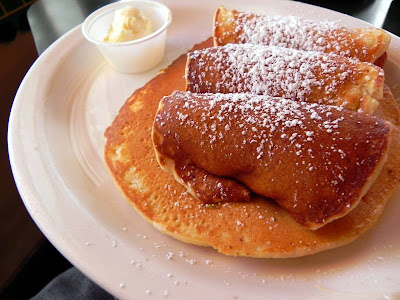 Casey's Pigs in a Blanket featured three links of sausage rolled in three pancakes fresh off the griddle and sprinkled with powdered sugar. With a generous dousing of syrup, Casey's simple breakfast suited her tastes (and mine) just fine.

What's even finer is that after spending a ton of cash on drinking all night, don't expect to break the bank at the Trolley Stop. Our breakfast was only $15 combined and neither of us could clean our plates.
Written by Unknown
Email ThisBlogThis!Share to TwitterShare to FacebookShare to Pinterest