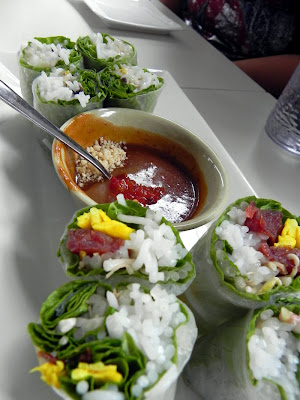 If there is anyone I can blame my Vietnamese food addiction on, it would have to be Leigh Landeche. We started working together what seems like ages ago out of a small, mostly empty office on Hickory Avenue when NewOrleans.com was owned by very different management. Anyhow, Leigh and I would work on the site all morning and then head out into the wilds of Harahan in search of an affordable, yet delicious lunch. It was Leigh who suggested we try a tiny Vietnamese restaurant called Kim Anhs Noodle House on Jefferson Highway for my very first bowl of pho. Yes, I loved it. Perhaps not as much as Leigh who could eat it everyday, at every meal, for the rest of his life, but I still loved it nonetheless.

Recently, I tried a fairly new Vietnamese restaurant on Magazine Street called "Magasin," which is actually the French word for "shop" or "store" and I never really quite got the connection other than it sounding like a fancy way to say magazine. Regardless. my buddy Anne, John and I all decided to give it a go. 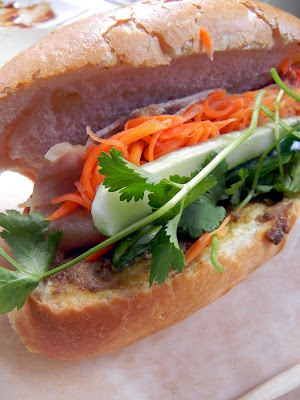 When we walked into the bright, white dining area, we saw that the restaurant was already packed. Luckily enough, we were able to score the last available table that was conveniently near a window. After a lengthy perusal of the menu, we finally placed our (massive) order and settled down to wait.

The first to arrive was a couple Goi Cuon or Spring Rolls, Chinese Sausage & Eggs and Shiitake Mushroom. Although both tasted nice and were stuffed with plenty of vermicelli and veggies, the main ingredients seem to be sadly lacking considering the price ($4 for 2 rolls) , though that still didn't stop us from dipping them in lots of peanut sauce and making them disappear.

Next, Anne and I decided to split a bahn mi while John ordered a whole one for himself. John got the Pork Roll & Pate while Anne and I chose the "deli special" which happened to be Grilled Pork, Pork Belly & Pork Pate. Both sandwiches were tasty, served on the delicious, local Don Phuong Vietnamese po-boy bread, but even after all this, we were still hungry. 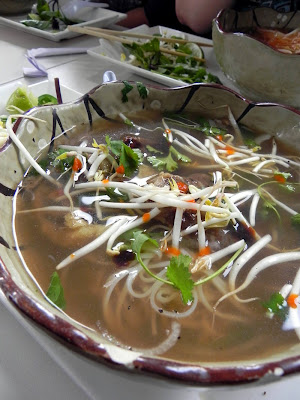 For our "main dish" we all ordered soup. John got the Pho Oxtail, Anne selected the Pho Filet Mignon and I chose the Wonton Noodle Soup. The dishes arrived one-by-one, the great ceramic bowls filled with steaming liquid set before us on a platter that included plenty of fresh herbs and veggies like bean sprouts, cilantro, sliced lime, basil and jalapeno. I really enjoyed the tastes of broth I stole from both Anne and John's dishes, a rich beefy broth with earthy, exotic spices like cinnamon and star anise. My soup was a bit different though, it seemed to have the same beefy broth, but it was drastically changed by the addition of tomato. Besides strips of pork and fat, pork-filled won tons, my soup also had egg noodles, though I would have preferred the rice noodles that the menu detailed.

When we finished our soup, we all sat around breathing heavily, suddenly feeling much more sated than we expected. We rolled out of the restaurant, grinning from ear to ear, discussing the next time we could stop in and try some of the other items on the menu as their Com or rice dishes sounded (and looked) amazing. I betcha Leigh would've loved it...

House of the week: Victorian on St. Thomas Street 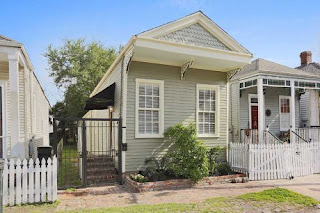 Throughout all this dreaming and admiration of big, four bedroom (or more) houses with guest cottages and swimming pools, it all comes down to one simple thing; I want to own my own home. It doesn't have to be a grand mansion with exquisite architectural details, with stain glass windows and soaring ceilings. I don't need sprawling grounds, state-of-the-art appliances and antique chandeliers. Sure, all that would be nice, but what would I do with such a place? Me, John and Pippin would be lost in something so massive, using two to three rooms of the house at most on a regular basis.

No. What I really want is a little place to call my own. A small house with maybe two or three bedrooms and a cute backyard. A house exactly like this...

Located on St. Thomas Street in the Irish Channel, this adorable, unassuming little property offers high ceilings, beautiful hardwood floors, exposed-brick fireplaces, a lovely galley kitchen, recessed ceilings, marble tile and a small, gated yard perfect for a frolicking, little shih-tzu and maybe a crawfish boil or two. It has two bedrooms, one and a half bathrooms and is a little over 1,000 square feet. Plus, it's only five blocks from Magazine Street (four from Parasol's) which mean access to Coquette, Joey K's, Sucre, La Divina Gelateria and the glory of the Garden District. This little (nearly accessible) dream is listed for only $237,000. Maybe it's time to buy...
Written by Unknown No comments:
Email ThisBlogThis!Share to TwitterShare to FacebookShare to Pinterest

The pleasure is all mine...

A few weeks ago, I was lucky enough to be selected to judge for the New Orleans Wine & Food Experience's Fleur de Lis awards. Aside from gorging myself in some of the city's best restaurants, I was able to hang with food professionals like writers Dale Curry, Sharon Litwin, Gwendolyn Knapp, Brenda Maitland, Lisa LeBlanc-Berry, Kendall Gensler and photographer Romney Caruso.

What is most stunning, aside from being able stuff myself silly in two 7-hour periods, is the miraculous creativity and enthusiasm we encountered from each and every chef. Although, I thought almost all of the dishes were phenomenal this year, there a few dishes that really stood out to me as being above and beyond the typically fabulous cuisine we have available to us here in New Orleans.

Palace Cafe blew me away with these Flambeed Duck Hearts served cold on toasted brioche, a dish I was actually afraid to try. Let me tell you, once I had my first taste, I scarfed down the rest with ease and avid enjoyment. 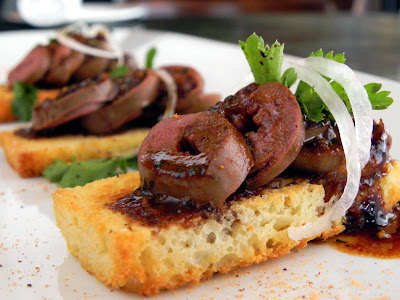 Now, it should come as no surprise that Chef Tory McPhail at Commander's Palace wowed us, but I am still raving about this Jamaican Jerk Pork served atop "island paella" with pickled fruit and aqua fresca. My mouth is watering as I type... 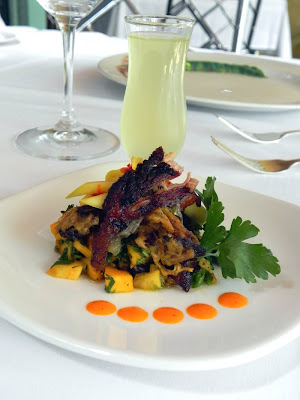 After tasting this next dish, I cannot wait for Tableau to open inside Le Petite Theatre...it was an adorably delicious Creole French Onion Soup with andouille sausage and a baby croque madame on top made with Chisesi ham and a quail's egg. 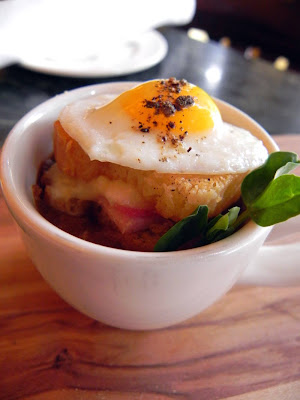 Chef Chuck Subra at the JW Marriott nearly destroyed our appetite for anything else when he presented this Green Tomato Courtbouillon with Louisiana seafood (a.k.a. oysters, shrimp, crab and crawfish) served atop buttery grits. They also offered us some warm, crusty French bread that we all couldn't help but devour, using it as a spoon to scoop up the luscious courtbouillon. 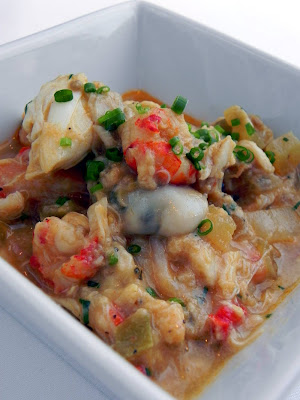 Finally, the last dish I'm going to mention is from 8 Block at the Hyatt Regency. It's last not because it actually was last or because there weren't anymore superb offerings, but because if I keep talking about this, I might just eat my keyboard. Also, when I was presented with this delectable dainty, I literally inhaled it after being so incredibly full, I didn't think I could manage another bite. It was Petit Chilled Raviol de Royan with roasted Creole tomato, arugula salad and burratta cheese. 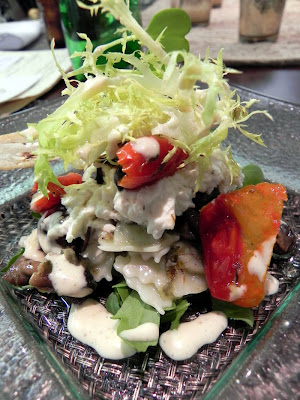 Just from the twenty or so dishes I tasted, I wouldn't miss the New Orleans Wine & Food Experience Grand Tasting event for the world...and you shouldn't either.
Written by Unknown No comments:
Email ThisBlogThis!Share to TwitterShare to FacebookShare to Pinterest
Newer Posts Older Posts Home
Subscribe to: Posts (Atom)