Capdeville: A street by any other name... 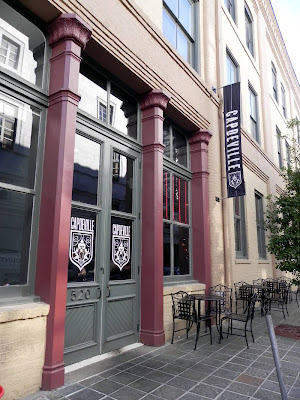 Hidden in the shadow of the monumental John Minor Wisdom U.S. Court of Appeals building (a really cool blog in itself) lies one of New Orleans' many elusive alleyways, Capdeville Street. Working within mere blocks of this street for two years didn't manage to bring it to my attention and it wasn't until the restaurant, Capdeville opened there, that I even knew it existed.

Not feeling very deserved of my 61st cheat (I gained two pounds), I moped about quite a bit, seeking something that wouldn't be too expensive. Capdeville, a self-claimed "American interpretation of a British social house" piqued my interest and stayed within my budget.

Arriving at the end of the lunch rush, John and I were seated very quickly and offered drinks and menus. Sucking our sodas from large, Guinness pint glasses, we made our selections while admiring the black & white photography adorning the walls, a glowing jukebox pumping out Black Sabbath and a chalk-scrawled quote on the wall by John Bonham, "Nowadays, you can't be loud enough."

Stomachs grumbling, we watched other diners receive their large white plates with envy until one of our own came out, a huge order of thin cut fries covered in crumbled Chorizo and shredded Manchengo cheese. The sausage was spicy and the fries were still hot and crisp, but I would have loved some more cheese. Manchego is so creamy and delicious, too much is never enough! 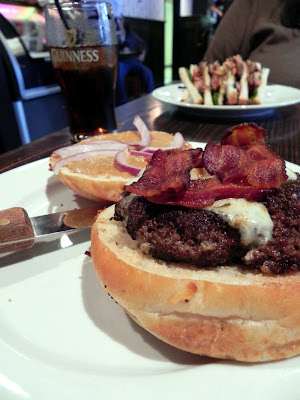 Just as we finished fork-fighting over the remaining French fries, our entrees arrived. John had a delicious Black & Bleu Burger with thick-cut bacon, creamy bleu cheese and Worcestershire mayonnaise. Cooked perfectly to order, the burger was so juicy and flavorful, John was reluctant to share.

I had selected the Duck Confit Club featuring duck cracklings dressed with a roasted garlic aioli, lettuce and tomato on toasted white bread. The condiments saved this sandwich that would have otherwise been too dry.

As usual, I couldn't leave without dessert and opted for their "Cobbler du Jour" which turned out to be apple. More specifically, a Honeycrisp Apple tart with brown-butter crumble. God forbid I ever turn my nose up at extra fat, but the piping hot tart tasted too buttery and the sweet flavor of the apple was almost completely lost. Maybe I'm more prone to the flavor of a sour Granny Smith for baking.

I'm glad to know Capdeville Street exists, thanks to the eponymous restaurant. I'll be keeping my eye out for other hidden delights down mysterious alleyways in New Orleans from now on.

*I can't read that last sentence without giggling...does that make me immature?
Written by Unknown
Email ThisBlogThis!Share to TwitterShare to FacebookShare to Pinterest

Have you ever been in the courthouse? It's a beautiful building. My wife used to work there.

It may be open to public. Worth checking out.

I have not! I would love to see the inside! The descriptions I've read sound stunning.

I will definitely look into that...thanks!