Wish it was my New Orleans story: The House on First Street 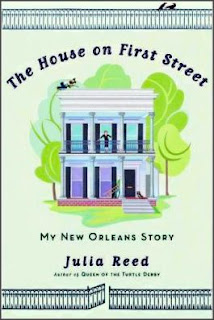 Let me begin by being completely straightforward...I hate books about the 2005 levee failures a.k.a. Hurricane Katrina.  Perhaps I am too emotional or too sensitive, but I just can't stand them.  I've gotten about halfway through most of them (forcing myself the rest of the way, page by miserable page), but every single story brings tears to my eyes and anger swells in my heart, every book except one.

Just recently, I miraculously tore through The House on First Street: My New Orleans Story by Julia Reed.  It's essentially a memoir of one woman's struggle before, during and after the flooding, a struggle that centers all around a house she purchased a mere month before disaster struck on August 29th.

Why, you ask, was I able to complete this novel and not the countless others that have made their way across my desk?  Because, although I know people like this truly exist, it was so out of step with my own reality that it felt like nothing more than fanciful fiction...even though it really was not.

Julia Reed is a Southern "aristocrat" who comes from a family endowed with both political power and seemingly inexhaustible wealth. She grew up in Greenville, Mississippi and attended Madeira, a prestigious all-girls high school, whose work-study programs gained her access to an internship at Newsweek, where by now she has been an editor and contributor for the past 20 years.

While reading The House on First Street, I felt almost like Nick Caraway in The Great Gatsby, in utter awe and envy of the opulence being taken for granted.  For example, she spent her "bohemian" years living in the slave quarter behind a creole cottage on Bourbon Street, writing in her nightgown, throwing "a lot of great parties" and enjoying regular, leisurely lunches at Galatoire's. During that time, she also bounced back and forth from a flat in New York and her residence in the Quarter.

After three years of dating, her lover asked her for her hand in marriage and she was scared of limiting her options.  She decided to leave New Orleans for a spell to spend three months in Spain where she went "ostensibly to learn Spanish and take in the bullfights."

She finally agreed to marry John after her "self-imposed exile" in Spain and when she and her husband finally decide to buy a house, where do they go?  The Garden District.  They search the district block by block when finally, they find the home of their dreams, a 6,000 square foot Greek Revival-style home built in 1847 by prominent Irish-born architect James Gallier Sr., located right across the street from Anne Rice's well-known house described in one of her bestselling novels, The Witching Hour.

I think my favorite scene in the book proving how money is obviously no object is when, after the storm, she returns to the city and befriends some of the National Guardsmen who come in from Alabama.  She feels so bad that they are forced to subsist off of MRE's, that she orders BBQ and sides for 700 from Podnuh's Barbecue, a tab that only succeeded in raising her eyebrows a bit.

Throughout the book, she is frequenting restaurants like Herbsaint, Cochon, Galatoire's, Restaurant August, Lilette and Stella!, all of which would put me in the poor house after only three meals...one if it was from Stella!, easily the most extravagant and expensive restaurant in the city.  Of course, she is very good friends with the famous chefs and restaurant owners in the city like Donald Link, John Besh, JoAnn Clevenger, etc., but do you think that ensures her a discount?

Now don't get me wrong, I thought The House on First Street was very enjoyable, smattered with humor and even moments of hilarity, something not often found in a "Katrina" book.  Julia Reed is obviously an excellent writer and (like me) a lover of the food, music, cocktails, history and culture of New Orleans. I just wonder if she realizes how fortunate she really is?  Some people just have all the luck...