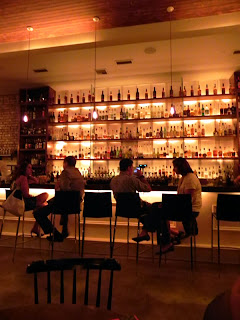 Sometimes too much to drink is barely enough. ~Mark Twain

Seeking to prevent our thirst and to sample some tasty nosh, Anne and I headed over to Cure on the corner of  Freret and Upperline several nights ago, already a little buzzed and excited about what we've heard about the swanky corridor cocktail bar.  Dressed totally inappropriately for the occasion, we sauntered into the hyper-urban atmosphere and plopped down in one of the booths.  Sitting there, it almost felt as if I was in another city, everything was very clean and cold.  The atmosphere was sexy, dramatic and romantic; a darkened loft with drop lights over the bar and a glittering selection of bottles, back-lit and reaching all the way to the ceiling.  There were silhouetted couples dotted against the long bar in front of our booth. It was obviously perfect spot for a date. 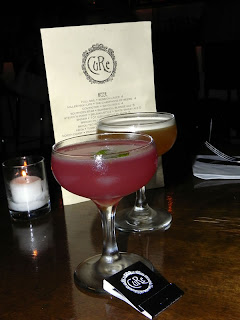 So not only was I NOT there to woo Anne, I was dressed in clothing bought from the Avenue with my man-purse slung across my chest and a face devoid of make-up.  In short, I was the complete opposite of everyone in the bar.  Didn't matter, I was there to drink and sample some of their tapas that I'd heard so much about.  That atmosphere actually made it easier to ignore the party next to you, which was as beneficial to them as it was to us, I'm sure.

A man who looked like Buddy Holly took our drink order while we browsed the small plates.  It took a leisurely amount of time for the drinks to come out, but I couldn't conceal my shock when they arrived.  My "Union Jack Rose" featuring Tanqueray, Laird's Bonded Apple Brandy and Applejack  was undoubtedly fantastic, I only wish there were more of it for $10.  Anne's "Rose Hinted Glass" with Lady VSOP Cognac, fennel tea and rose water was equally wonderful, but again...4 oz for $9? 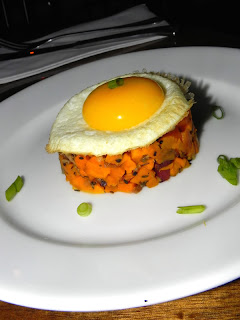 While Cure was a bit short with its cocktails, it was both generous and genius with its tapas. First we had an Artichoke and Goat Cheese Crostini, an elegant combination of sweet and savory on crunchy french bread and similar in effect, if not flavor, as the thinly sliced, aged Serrano ham served with sherry-poached Anjou Pears. Both dishes were excellent in quality as well as quantity.

We also enjoyed Duck and Sweet Potato Hash topped with a Vermouth-poached egg.  When broken, the creamy yolk combined with the hash and I just about died.  Anne was concerned about this particular dish, not being a fan of sweet potato, but I noticed she didn't have any difficulties devouring her half.

The heat enveloped us once again as we stepped outside and I felt like I was in New Orleans again.  Taking a break and leaning against the wall was a young man in a chef's jacket smoking a cigarette. I simply had to shake his hand.  The wonderful dishes we enjoyed (and the ones we didn't) were more than enough reason for a return visit.

Next time though, I might just drink an Abita.
Written by Unknown
Email ThisBlogThis!Share to TwitterShare to FacebookShare to Pinterest

I wish the artichoke wouldn't have been so sweet, but again... I ate that as well. Haw haw.

When we get jobs? We should go again :)

I'm alway hungry after I read your blog!

@Dore...I didn't even know you were reading! Hungry is a good thing ;)