Enlightenment at the Green Goddess 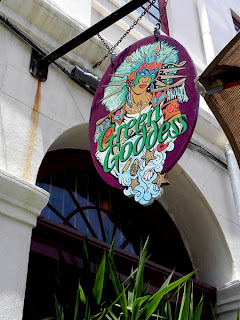 A couple of weeks ago, my friend Casey had accompanied John and I on one of my cheats and unfortunately, it turned out badly.  I felt terrible, especially after constantly bragging about the all the fantastic eateries I had already experienced.  Determined to make it up to her, I chose a special spot for lunch this past Saturday that I knew for a fact would be outstanding and blow both of our minds (not to mention our palates)...the Green Goddess.

How did I know the Green Goddess would be a good bet? With chefs like Chris DeBarr and Paul Artigues at the helm, how could it possibly go wrong? Both are local heroes known for their creativity at the Delachaise and Surrey's Juice Bar respectively, not to mention that DeBarr is married to one of my favorite authors (Poppy Z. Brite), but that's just lagniappe. My mouth was watering in anticipation for what I knew would be one hell of a meal and at this point, I think Casey was simply hoping I would be right this time. 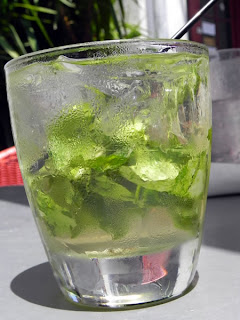 Although located in the French Quarter, this tiny cafe has an unusual level of intimacy not easily found so close to Royal Street.  Tucked into Exchange Place, a small alley found right off Bienville between Royal and Chartres Streets, we were surprised to find two available outside tables, especially since it was the second day of the Satchmo Summer Festival. I suppose the heat drove most of the patrons inside, but Casey and I thought it was pleasant under the large shady umbrellas and sat down, prepared to relax into a long, leisurely lunch.
With so many drool-inducing items on the menu, it took us a while to order, but our server was patient and accommodating, taking our drink order while we debated our options.  Casey chose a "Pear 75", which was a like a tricked-out Mimosa featuring Oregon Pear Brandy, Austrian apricot liqueur, a house made ginger syrup and topped with champagne. Its flavors were very complex and my only complaint was that I wished it was a lot colder. I opted for "Solidarity Sunshine", a cocktail the restaurant tagged as "an adult lemonade" with Sparkling Meyer Lemon Juice, Sobieski Vodka and fresh basil...a delightful and refreshing drink, reminding me of the almighty Mojito. We both were so dazzled by the "Sunshine" we had to order two more. 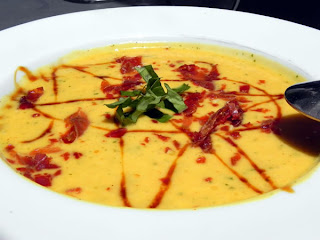 Casey's allergies prevented her, but I just couldn't resist ordering the special, a chilled mango puree drizzled with balsamic and laced with thick, crisp strands of prosciutto. Tropical fruits like mango, pineapple, banana, guava etc. intrigue my taste buds to no end and mango soup was an adventure impossible for me to ignore. I have to admit feeling a little guilty devouring the tangy, wonderfully chilled soup without being able to share with Casey...just not guilty enough. I think she understood though, plus the prospect of breaking out in hives while sweating in the mid-summer New Orleans heat was an effective deterrent. 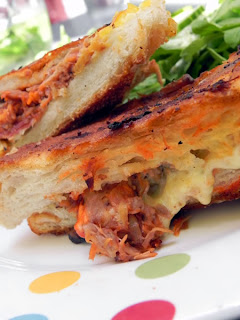 Casey came into her own though with what I thought was the better entree, the "Cuban Luau," a pressed sandwich featuring pulled pork, salame, grilled pineapple, pickled banana peppers and Manchego (Queso) cheese on ciabatta bread. Casey immediately declared that it ranked in her personal top five sandwiches of all time and I'm inclined to agree. Every bite danced you through a crispy, buttery, tangy, creamy, salty whirlwind leaving you breathless, but raring for another go.

Not quite as daring, but still absolutely delicious, I enjoyed the "Lafitte Blue Crab Melt" that was literally loaded with large chunks of juicy crab and melted Robiola cheese with a spicy remoulade sauce on toasted ciabiatta. The slight tang of the cheese complimented, rather than overpowered, the delicate crab meat and I had no difficulty scarfing down the entire sandwich. Actually, since I am re-savoring the moment, I must remember to ask them where they get their bread! Next time... 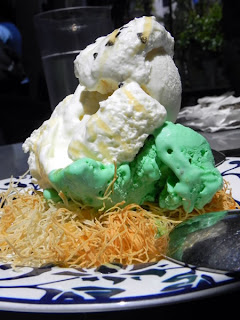 Casey and I also shared a order of "French Duck Fat Potato 'Home Fries'" served with garlic aioli and roasted, red bell pepper dipping sauces.  Can anyone really resist potatoes cooked in duck fat? The thick potato slices were either super crunchy or soft and greasy, but wonderful nonetheless especially after being dipped.

Bursting at the seams but determined to do it right, I requested the dessert menu, disregarding when Casey helplessly moaned "No more!" Forcing her to my will, I made her scan the menu till we both agreed on "The Sultan's Nest". Regardless of how full she was, Casey couldn't help indulging in several bites of the delightful dessert. Pistachio Gelato and whipped cream sat atop a nest of crunchy, shredded phyllo curls and honey infused with saffron, candied Yuzu peel and orange blossom water. Ambrosial, mysterious and sweet, it was certainly food for the gods, or in this case goddesses, and we'd just been given a brief taste of heaven.

My compliments to the magic-makers at the Green Goddess for a most memorable meal and, more specifically, for helping me regain Casey's trust in my choice of eateries. One thing's for certain, I'll be back to worship at your temple again soon...
Written by Unknown
Email ThisBlogThis!Share to TwitterShare to FacebookShare to Pinterest

Oh man, I could eat that dessert for every meal. I couldn't stop talking about this place all weekend!