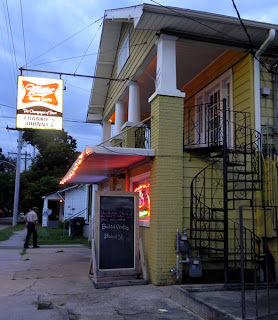 After visiting the Green Goddess last week, I was talking to Casey and John about possible locations for my next cheat and I told them I've been wanting to try Franky & Johnny's.  Almost in unison, John and Casey started chanting "I say, I say, I say" and they laughed when when I asked if they'd both gone mad.

Once again, I was showing transplant ignorance by not recognizing a famous (or should I say infamous) television commercial for a budget furniture store which is also called Frankie and Johnny's.  They dug up the commercial on YouTube so I could experience the silliness for myself.  The Italian gentleman with a terrible hairpiece shuffle-dancing towards the camera instantly reminded me of a crazy local commercial I grew up with featuring Paul, the "Credit Man" from The Diamond Center. 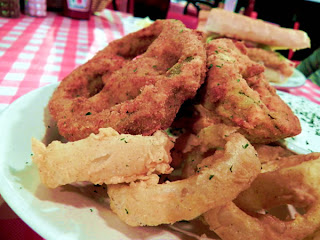 All joking and low-budget commercials aside, I convinced John to take me to Franky & Johnny's...for dinner, not a couch.  It was my 47th cheat and I am down 66 pounds.

I don't want to say "It was a dark and stormy night" because it sounds so cliche, but...well, it was a dark and stormy night when we pulled into the puddle-filled parking lot on Arabella and Tchoupitoulas Street.  Admittedly, it was a bit intimidating when we walked into the practically unlit bar, but we could see clusters of tables in the back and followed our noses.  We were seated right away and served two mammoth Cokes within seconds of ordering. 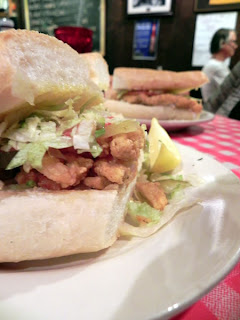 The small restaurant/bar is located in the basement of a raised Craftsman-style house, so the ceilings are low and there are large beams that separate the space.  The simple, family/neighborhood vibe reminded me of Perino's Boiling Pot on the Westbank, from the relaxed, yet hospitable servers to the red & white checkered tablecloths.

Our appetizers came out first, a small crawfish pie and a choice highly recommended by our waitress, a split order of onion rings and bell pepper rings.  I loved the flavor the celery and carrots in the crawfish pie, almost like a homemade pot pie, but I thought it could be a bit bigger for the price since we gobbled it in no time flat.  The fried bell pepper rings were fabulous, the pepper was still fresh and juicy inside the spicy, crispy batter.

That same batter was used on my 8-inch fried catfish po-boy and John's fried shrimp po-boy.  They dressed both sandwiches with pickles, tomatoes, lettuce and butter (margarine actually).  It was a first for me since most shops I've been to use mayonnaise instead.  The difference didn't bother me one bit, in fact, I really enjoyed it.  Both of our entrees were pretty tasty, but more than we could manage in one sitting.  If we ordered one 12-inch, we probably could have split it. 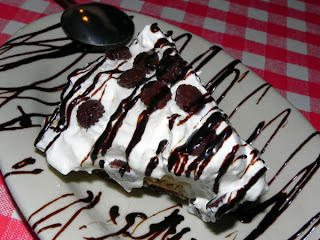 As stuffed as we were, I simply couldn't walk out of there without ordering dessert. I almost went with the sweet potato pie, but ended up opting for the Chocolate Peanut Butter Pie that "wasn't made in house but was definitely made locally."  It certainly wasn't the prettiest presentation, but it was definitely delicious. I look forward to crawfish season when I can come back to Franky & Johnny's and sample what they are known for, boiled seafood.

Until next time, I have no choice but to let you have it..."with nooo problem!"