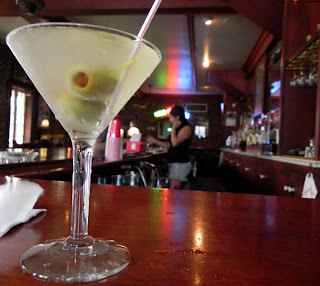 Smack dab next to my favorite burger joint in the whole city lies an unassuming Riverbend haunt called Madigan's.  To find it, just look for the large green, neon sign on the corner of Maple and S.Carrollton Avenue, only a short walk from Camilla Grill.  Sometimes, the bar is opened up on the Carrollton-side where you can sit in the open breeze, watch the streetcars trundle by, sip cold drafts and dine on food from GB's.  I've been into Madigan's several times and it's always struck me as a very mixed crowd, not leaning too heavily on the frat side despite it's proximity to the colleges.

John and I followed a couple and their dog inside and took a stool at the bar.  When I asked the bartender, Adriane, if she had a signature cocktail she kind of laughed and said "I should, shouldn't I?"  Then she suggested an Iced Tea Lemonade made with Firefly Sweet Tea Vodka and "a bunch of other sweet stuff."  A fan of Nestea, she's concocted a recipe that tastes exactly like it.  Although I certainly felt it, I didn't taste the alcohol at all, which made it dangerous as well as tasty. 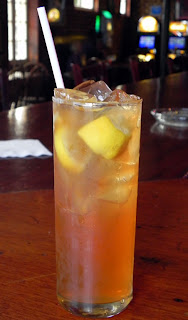 Since it was still kind of slow, Adriane came over to chat and I learned that she's been tending bar at Madigan's for the past two years, but she used to work in Quarter at Molly's and Turtle Bay.  Adriane, born and raised in Metairie and a Grace King High School graduate, expressed a wavering interest in telling her own hair-raising tales when she found out I was writing this blog.  When I asked why she hadn't already started, she said her stories always unintentionally sounded like complaints! I thought she should still give it a go, stories I've written result differently than I intend all the time! You just never know...

I had to have one more drink before heading out and opted to stay on the vodka track with a very dirty Grey Goose martini.  Adriane even gave me a little extra dirt in a small cup, just in case, but the martini was perfect, replete with two plump olives speared onto a tiny plastic sword.

John and I decided to leave when the bar began filling up with avid Saints' fans sporting black & gold jerseys and arriving just in time for the pre-season game against the Patriots. I know I will probably be shot on sight, but I am not a football fan, or even a sports fan in general,  so I saw no point in taking up two perfectly good bar stools that could go to worthier candidates.  Although I don't care to watch the game, it doesn't mean I don't support the passionate fans and their undying love and devotion for the team.  Not to mention, John and I were on our way to enjoy another delicious cheat meal and I was sure the game would be playing there too.
Written by Unknown
Email ThisBlogThis!Share to TwitterShare to FacebookShare to Pinterest