You can judge a book by its cover: The Famous Gumbo Pot 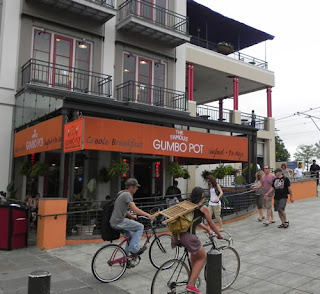 Sticky from the humidity, tired and hungry, John and I wandered into a restaurant we chose purely because of its proximity to the car.  It had been a crazy day what with John being called into work unexpectedly and, after running some errands, I searched for an hour to find a parking place in the Quarter...even the lots were full!  I knew there would be a lot of tourist traffic, but it was 2 pm!  Shouldn't all these people be at Jazz Fest eating Crawfish Monica and listening to Kermit Ruffins or the subdudes?  Needless to say we were both feeling a bit ornery too, so we chose to eat conveniently as opposed to wisely.

On Friday afternoon, John and I ate at The Famous Gumbo Pot. This is my 34th cheat and I am down 59 pounds. 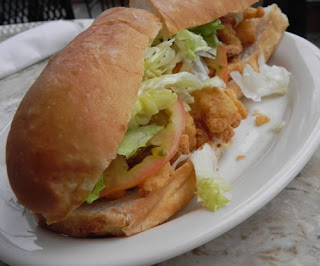 First off, I really have to address the word "famous".  Even though I was exhausted and hungry, that word itched at me, I mean, I had never heard of the Gumbo Pot before...have you?  A Google hunt revealed a Craigslist job posting and reference to a New Orleans-style restaurant in Los Angeles.  How could you be famous if no one knows who you are?

Anyhow, we both realized we were subjecting our wallets and stomachs to the whims of a restaurant positioned (and named) to ensnare the unwary tourist, but we were too tired to argue and decided to risk it.  We were seated at a patio table and quickly served a couple of beers while looking over the menu.  The prices were ridiculous, although fairly common among French Quarter eateries and we decided to go with what would be the most affordable...a couple of po-boys.  We also got one side of fries (the $14 po-boys did NOT include them) and I thought, since they were named The Gumbo Pot, I should taste a cup of their "famous" stew.

The po-boys came out first, John got a roast beef and I chose shrimp.  They both were very large and pretty tasty, even though the bread was not what we are used to.  John's po-boy could have used some more roast beef, it was a comparatively skimpy portion, but the sandwiches were easily the highlight of our meal.  When John tasted their duck and andouille gumbo, he laughed and said "Where's the roux?"  I tasted a spoonful and realized he was right!  It tasted like all of the rich flavor that comes from a good roux had been substituted by some kind of boil seasoning...perhaps Zatarain's? I am not positive what it was exactly, but I do know that if you are going to tout the name The Famous Gumbo Pot, you better have some really good gumbo. 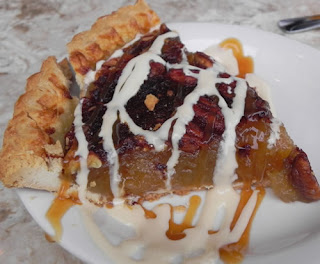 I should have known that ordering dessert would only further my disappointment, but it was like seeing a car wreck happen right in front of you...you just can't look away.  Maybe I was a glutton for punishment or maybe I was hoping they would pull it together for dessert, but I ordered a slice of their pecan pie and crossed my fingers.  Pecan pie is fairly simple to make, they couldn't possibly screw it up too bad, right?

As it turns out, if you are seeking a way to completely rip off your patrons, you can very easily screw up the simple recipe for a pecan pie...just leave out the pecans!  I mean, I was shocked!  In this rather large slice of pecan pie there were only three or four pecans. Really?  For a $6 piece of pie I only get four pecans?

Well, I suppose that's what I get for being grumpy and impatient.  At the very least, anyone who reads this will be wiser for the ware.  If you want some pretty good gumbo, tasty po-boys and really respectable prices while you are in the French Quarter, go to the real original...go to the Gumbo Shop.
Written by Unknown
Email ThisBlogThis!Share to TwitterShare to FacebookShare to Pinterest