It's just got to be Wright! The Unity Temple on St. Charles Avenue 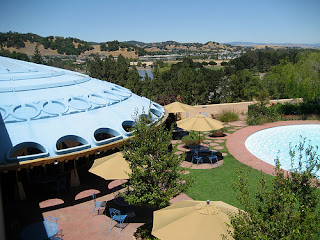 My best friend Chris bribed me with a double espresso from my favorite coffee shop on 2nd Avenue (in-house roasting!) and before I knew it, we were zooming north on Highway 280 and I was trapped.  It wasn't until almost 30 minutes later when we were crossing the Golden Gate Bridge did I begin wondering what I got myself into. Unveiling his mysterious destination at last, Chris informed me of his impending art project involving interior architecture.  His assignment -- visit the Marin County Civic Center in San Rafael.

This building was the last commissioned by Frank Lloyd Wright and unfortunately, he didn't live to see it completed in 1962.  It's an amazing structure, but overwhelming the awe felt by the endless curves and arches, the building reminded me of what you might see in a 60's television production of Bradbury's Martian Chronicles.  It's a crazy sensation!  I felt like I was wandering around the set of an old science fiction movie and with good reason, portions of the science fiction films THX 1138 (1969) and Gattaca (1997) were shot on location in the Marin Center. 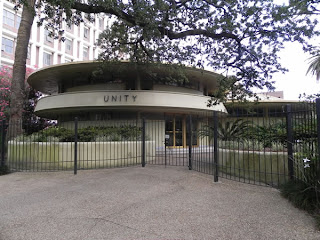 You are probably wondering why I am rambling on about architecture in California for a New Orleans-centric blog, right? Well, the reason is because I get that same "sci-fi" feeling when standing before the Unity Temple on St. Charles Avenue.  Now, no one can deny that New Orleans possess its own unique architectural styles, but among the shotguns, Creole cottages and double gallery structures, the spaceship-like appearance of the Unity Temple stands out like a sore thumb. The extreme "saucer" shape of the main building, the brassy color of the roof, the circular patterns in the garden and the strange architectural "decorations" added to the outside of the building all remind me of the center in San Rafael.

It's similarities to the Marin County Civic Center aren't the only reasons I think the Unity Temple might be a Wright creation (or created by an architect copying his peculiar style). My most convincing evidence is the simple fact that Frank Lloyd Wright designed other Unitarian temples like the Unity Temple in Oak Park, Illinois or the Unitarian Meeting House in Madison Wisconsin. 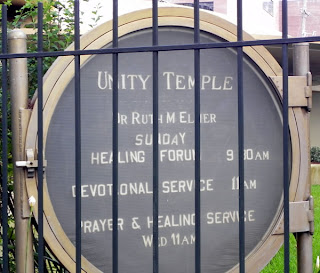 Perhaps I am grasping at straws but from the light research I have already done, no one else seems to know.  I even contacted the temple itself and have not yet received a response. I'm not sure the church is even still active.  I am going to have to do a bit more digging, perhaps even show up to the temple during the scheduled services listed on the neglected announcement board outside.  Perhaps I could even get to tour the temple and get a good glimpse (or perhaps even pictures) of the interior! Maybe there is someone out there reading this that knows the answers and will be kind enough to share their knowledge with me.

Regardless, I will eventually find out the truth, even though I will probably never shake the feeling that it's just got to be Wright.

*Author's note -- Shortly after posting the blog above, I discovered this obscure website that verified my hunch!  Apparently, the Unity Temple was designed by Leonard Spangenberg, Jr., a student of Frank Lloyd Wright!  Gosh...I just love it when I'm right.

it was designed by a local firm. here is an article from 1961 that was in Dixie Magazine (Times-Pic) that i found a couple of months ago researching the architect of the Plaza Tower.

just saw yr final note that you found out about Spangenberg

Thanks so much for the link though Anthony. The article you linked is far more detailed than the site I found!