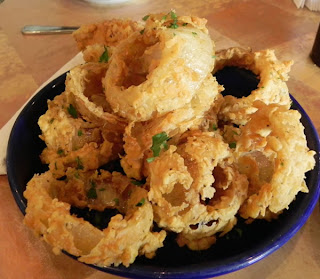 Before I began using them, social networking sites and services like Facebook and Twitter used to make me cringe.  I kept thinking, "Does anyone really care if 'Bohemian Rhapsody' is playing over and over in my head or why I prefer mayo to Miracle Whip?"  As it turns out...they do.

But what's truly amazing about social networking, aside from communing with family and friends across vast distances, is being able to tout yourself and your work.  You can share your efforts with everyone you know in a matter of keystrokes and draw people together who appreciate the same things you do in a matter of moments.  For example, over the past week while I was considering a few different places for my cheat meal, I kept getting menu announcements from Fat Hen Grill on Facebook.  After seeing posts discussing the "synergy of a burger", Crabmeat Mango Salsa or a Soft-shell Crab BLT, Fat Hen Grill snuck into my list of places to go and I decided to try it out. 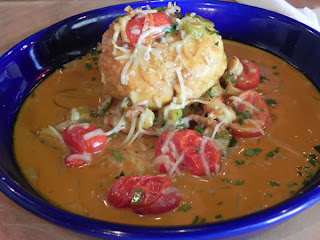 Fat Hen Grill is a fairly new establishment that recently moved from their former location on Citrus to the old Pellittieri's building on Hickory Avenue in Harahan. I think I preferred the old locale only because it looked more like a diner whereas the new building still has the feel of an Italian restaurant with dark green faux-finish on the walls and lots of four-top tables instead of squishy, yet comfy booths.  I let my criticisms fall by the wayside though because the move was very recent and it appeared they were still trying to pull things together.

Fortunately, my friend (and local Food Goddess) Lorin Gaudin and her husband Andre decided to have lunch with John and I for this particular cheat and we ended up languishing over lunch for some time.  It did take us a little while to order, but only because there was so much to choose from! After the three menus circled the table (breakfast, lunch and specials), we finally made our decisions. 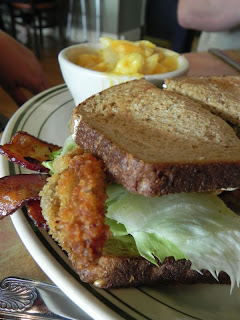 We started with the Crawfish Biscuit, a homemade biscuit served with a crawfish cream sauce drizzled on top.  I thought the biscuit was light and fluffy, really quite tasty, but the sauce was just a bit too tart...perhaps a little too much lemon?  Andre had also ordered some Onion Rings that came out as an appetizer which I totally enjoyed.  They were nice and crispy and were also, most obviously homemade.

Before too long, our entrees arrived.  John got a Barnyard Burger featuring American cheese, grilled onions and Fat Hen's special sauce served with French fries.  Although it tasted nice, I thought it was odd that the patty was all broken apart inside the bun, which made for difficult handling.

I had ordered the Crispy Fried Soft-shell Crab BLT dressed with avocado mayonnaise and a side of macaroni and cheese.  The mac and cheese was tasty with large penne noodles that held a thick, gooey cheese sauce, but my sandwich was somewhat of a struggle.  Even though I enjoyed the flavor, trying to contain a fried soft-shell crab plus several strips of Applewood smoked bacon and fresh lettuce and tomato on small slices of toasted wheat bread made no sense to me at all.  I think using a sturdier bread like sourdough or even French might have saved the day. 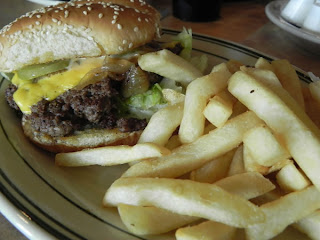 Andre chose Chicken Fried Steak served with seasonal vegetables, mashed potatoes and Black Pepper Country Gravy while Lorin opted for the Harahan Patty Melt served on sourdough with American Cheese.  Out of all four entrees, I liked Lorin's the best, but in general I found all of the food to be a little too heavy for me.  Am I really starting to dislike your typical "greasy spoon" type of cuisine?  Has my diet begun to steer me away from the things I love most?  Regardless, I was really full after only a few bites.  Maybe my stomach just won't let me eat like I did in college anymore...

Considering I want to lose weight, this isn't such a bad thing. 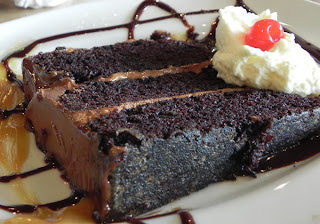 Well, even if most of my lunch ended up in a to-go box, I still couldn't walk away from this cheat without dessert.  There were several options like Banana Cream Pie and a Chocolate "Glob", but for some reason (okay, it's my obsession with Queen), I couldn't help wanting to try the Fat Bottomed Chocolate Cake. The waitress assured us that the cake was house made and quickly saw to our order.  She split the normally humongous slice into two pieces so we could share the dessert in couples.  Even though I enjoyed the rich, chocolate flavor of the cake, it was quite dry and sadly disappointing.

Although the cheat wasn't quite what I was hoping for, I still had a fantastic time dining with Lorin, Andre and John and thought that Fat Hen Grill had a lot of potential. It's obvious they use fresh ingredients and that they care a lot about prompt service and a clean environment.  I will have to come back again and try the infamous "Womlette" (an omelet served atop a Belgian Waffle) or perhaps their Eggs Benedict some time in the future.

Until then, I feel the urge to share "Another One Bites the Dust" while debating the flavor value of non-fat mayonnaise (if indeed there is any) on Facebook. Wanna be my friend?
Written by Unknown
Email ThisBlogThis!Share to TwitterShare to FacebookShare to Pinterest

I must say I was quite surprised by your review of The Fat Hen Grill, Shane Pritchard is a fabulous chef. His food is really awesome, I believe everyone has a bad day, and that some things may go wrong at one time or the other. The atmosphere may be different from his smaller cafe, but he is evolving.
I do hope you visit again in the near future, and give him a 100% satisfactory review, trust me you can't go wrong the food is really great, everyone I speak to agrees with me, thank you........

I am sure that you are right. I'm not sure, though, why you though I gave the grill such a negative review. I certainly didn't intent to come off that way. I just wanted different bread on my blt and a moist cake! ;) Additionally, I intend to go back and try breakfast there very soon!

I read your review about the Fat Hen and The comment "another one bites the dust" seems to be very clear as to what your experience and what your feelings are of the restaurant. If you feel other wise I would suggest rethinking your choice of words in the concluding paragraph of your review. As for your description of the food, you should take lessons from Hemingway. He had an incredible talent to use words to describe emotions and objects. In a review or any piece of literature that focuses on food and its preparation and taste, one must invoke the spirit of Hemingway. unfortunately, Hemingway's ghost was not with you. The article lacked description of the food,one must feel as if they were their experiencing the moment with you. The soft shell crab... what was the taste of the sandwich on your tongue. how did the combination of the sweet and salty taste. Or perhaps it was none of these. I would suggest that your next review would be more insightful about the food and its preparation. Its appearance every minuscule detail which may seem trivial to you but is so important to the reader. Ultimately this will help you determine if you enjoyed the experience and you can actually give a proper review.

Uncle! I was trying to put a positive face on a negative experience and it just didn't come out right. It doesn't mean that I won't try the Grill again or that I don't understand what it means to have an off day.

By the way, I've always detested Hemmingway. He spent far too much time hiding his intentions behind symbolism and innuendo, putting his readers to sleep with detailed descriptions that meant nothing unless analyzed to death. So...thanks for the compliment.

Despite how snarky I sound, I appreciate the time you took to read my blog and offer honest criticism. Thank you very much.