No cheating at Pho Tau Bay 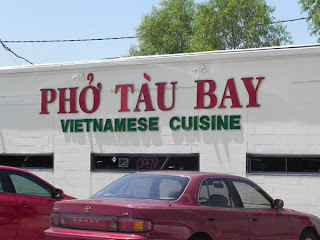 Cross my heart and hope to die, I swear I didn't cheat on my diet today.  I dined at Pho Tau Bay.

John and I met some friends for lunch on the Westbank and we all agreed to meet for pho at our favorite restaurant.  It was my old co-worker, Leigh who got me addicted to pho back when we used to work in Harahan.  There is this little eatery in a strip mall along Jefferson Highway called Kim Anh's, only a few blocks away from where our office was.  Leigh often tried to convince me to eat there almost every day.  I thought pho would start to leak from my ears after a while, but it was just a matter of time before I was hooked too. 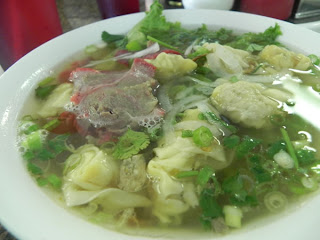 When the office moved into the CBD, we tried out Pho Tau Bay (113 Westbank Expressway) and have been loyal fans ever since.  Not only does Pho Tau Bay have excellent pho, they have a huge menu to please any palate and offer some of the finest Vietnamese cuisine I have ever enjoyed.

There is one dish in particular that I simply can't resist, the Pho Tau Bay Won Ton Soup, one of the chef's specialties and at only $6.95, a great deal for lunch.  The soup is replete with a rich broth, thin slices of pork, lots of vegetables and delicate won tons stuffed with shrimp and pork.  For an additional $1.50, I like to add some rice noodles to the soup and that is all she wrote.  After a bowl of this incredible soup, and possibly an egg roll (cha gio) if I'm feeling naughty, I'm completely full and more than satisfied.

The best part is that with all of the vegetables and lean meat, I'm not breaking the rules of my diet even though it feels like I am!  Pho anyone?