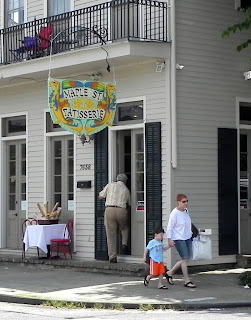 When you think of the name "Ziggy", a slew of famous characters come to mind; Ziggy Marley, Ziggy Stardust, Evander "Ziggy" Hood and even Ziggy, the well-known cartoon strip.  Thursday afternoon I was forced to add another personality to the "Ziggy" hall of fame, Ziggy Cichowski...Master Pastry Chef at Maple Street Patisserie (7638 Maple Street, (504) 247-7912).  This was my 37th cheat and I have lost  a total of 62 pounds.

Ever since Lorin Gaudin mentioned the new patisserie on Maple Street a couple weeks ago, I have been searching for a way to try it out.  I mean, all of my cheats usually consist of an entire meal that includes an appetizer, entree and dessert.  Was I sure I wanted to sacrifice an entire precious cheat meal for a literal binge session that would only feature large quantities of pastry?  You can bet my ass I would!

Like indulgent children in a candy shop with too much pocket money, John and I visited Maple Street Patisserie with one thing on our minds, enjoying as much pastry as humanly possible before we made ourselves sick.  The enthusiastic gentleman behind the counter was ready and willing to help, suggesting we try one of everything (it was so difficult to choose!) and we almost did. 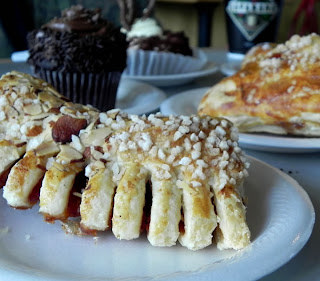 John just started pointing to delicacies in the case, picking out a raspberry bear claw, an apple danish and a chocolate cupcake.  Showing uncharacteristic restraint I selected only two items, a strawberry turnover and a banana cream tart.  The coffee we ordered came from a "serve-yourself" stand of Luzianne dispensers in the corner of the bakery.  Noticing our excited response to the treats before us, Chef Ziggy came out and offered yet another delight that was his grandmother's recipe, a apple pastry shaped like a tart, but with a dense sweet crust that reminded me almost of a cookie.

Although we shared our sweet feast, John and I were still unable to completely finish all six pastries.  It was no surprise that the bear claw disappeared quickly, unlike most I've tried it was crunchy, flaky and light with large granules of sugar adorning the crust and a thin, tart layer of raspberry inside.  The other items, although fantastic, were simply too much richness to handle.  We were able to demolish most of the strawberry turnover, the filling surprised me mostly with the distinct flavor of fresh berries that weren't overwhelmed by too much sugar. 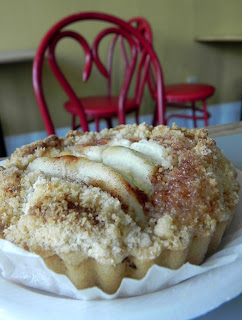 We dipped into the decadent banana cream tart featuring thick slices of real banana, creamy custard and whipped cream resting in a chocolate cookie-like shell but were unable to finish it.  We also tried, in vain, to eat all of the apple danish and Chef Ziggy's most generous gift but we simply couldn't go on.  The chocolate cupcake wasn't even touched, although you can be sure we gobbled the moist, heavenly cake later that day.

While catching our breath, Ziggy chatted with us, relating his baking schedules, the popularity of his creations and his upcoming catering gigs.  Animated by obvious enthusiasm and devotion to his craft, he joked with us good-naturedly and encouraged us to request anything we wished from his bakery, confident in his talent and skill.  He offered us a sample of some whole grain bread that was fresh from the oven, relishing our reactions and basking in our praises.  John mentioned my unnatural obsession with bread (it is easily my biggest dietary vice) and Ziggy encouraged it, recommending I visit the bakery in the morning when the smell of freshly baked bread permeates the shop...I wouldn't be surprised if I could smell it several blocks away.

With a large box full of leftovers, John and I finally left the patisserie.  We were utterly full, sated by the sinfully delicious desserts we just ate and high from an inordinate amount of sugar.  Ziggy's magical pastries had elevated our senses and further exaggerated why I must stick to my dietary regime.  It will be incredibly difficult to avoid the Maple Street Patisserie in the future.  Don't be surprised if you see me lurking around the building, sniffing indiscreetly every time the doors open, stealing jealous glimpses of string-tied boxes filled with goodies unimaginable carried by patrons unaware of my stalking.

Only please if you see me, don't offer me a bite!
Written by Unknown
Email ThisBlogThis!Share to TwitterShare to FacebookShare to Pinterest

I don't know you but I'm so glad you posted this. I just heard about this bakery b/c I told someone my husband was of Polish descent and they said a polish bakery opened recently. I can hardly wait to try it this weekend! Your descriptions are giving me cravings already :)