The Blue Plate Cafe: An incredible meal, I guarantee! 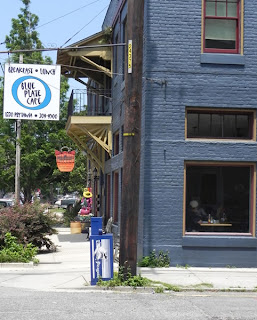 After last week's utter disappointment, I wanted to be absolutely sure I would enjoy a delicious cheat.  One particular restaurant had continually popped up in our discussions, though often passed over in favor of something new.  This time we gave in to our better judgement and decided to dine at the Blue Plate Cafe.  This is my 35th cheat and I am down 60 pounds.

John and I have visited the Blue Plate Cafe (1330 Prytania Street) on many occasions.  In fact, it had become one of our favorite lunch spots when we used to work downtown thanks to a brave recommendation by my friend, Meghan Jones. Knowing her passion for good food is just as strong as my own, it was easy to trust her choice when it came to trying out a new eatery.

We stepped into the quaint cafe late in the lunchtime rush, but the brightly decorated restaurant was still quite full.  We sat ourselves at one of the empty tables and watched other plates being brought out from the kitchen, our stomachs rumbling.  A server quickly arrived to offer us menus and take our drink orders. 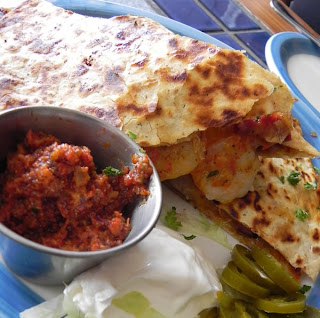 We both were undecided, trying to select between the items on the menu and a few specials on the chalkboard.  One of the reasons the Blue Plate appeals to me, other than the awesome food and totally reasonable prices, are the amusing names given for their unique dishes.  I was extremely tempted to order their Mac & Cheese with Crawfish special, but I simply couldn't resist my old standby, "The Beast."  John was in the mood for their "Ignatius" and we both decided to add on an appetizer called a "Bayoudilla." Both sandwiches were grouped into a section of the menu called, most appropriately, "Two Fisters."

The appetizer we selected came out first and we couldn't wait to dig in.  The "Bayoudilla" is a Cajun version of a quesadilla, but stuffed with shrimp, smoked sausage, green onion and cheddar.  Served alongside is a healthy helping of sour cream, some slices of pickled jalapeno pepper and a sweet, roasted red pepper sauce.  The "Bayoudilla" was delicious and we might have scarfed down the entire order if our sandwiches hadn't arrived just in time. 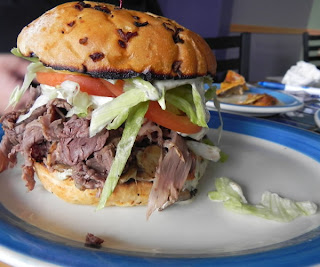 If you are a fan of Dr. Seuss like me, you'll know why the name "The Beast" tickles my funny bone, nonetheless it's still one hell of a sandwich.  Thinly sliced, rare roast beef (or beast if you're in Whoville) is piled high on an onion roll, topped with thick slabs of brie and slathered with a fantastic horseradish sauce.  It is, in my humble opinion, one of the best roast beef sandwiches I have ever eaten.


Toole's character would adore John's sandwich, the "Ignatius", which the cafe touts as "10 inches of paradise" and I have to agree.  Several split links of smoked andouille sausage are bedded on a soft French roll and dressed with chili, cheese and onions...a mouthwatering Cajun version of a Lucky Dog.  It just doesn't get any better than that. 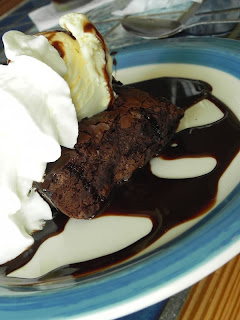 Although we were really stuffed, I absolutely had to try a dessert at the Blue Plate Cafe.  I hadn't seen any dessert items on the menu or the specials chalkboard, but I was positive they would have some tasty item we could enjoy to round out our terrific cheat.  Our server smiled knowingly and offered two options, a homemade brownie with vanilla ice cream and chocolate syrup and what they called a blueberry "biscuit" with vanilla ice cream and blueberry sauce.

To my complete surprise, John announced he wanted his own dessert this time and opted for the brownie and I selected the blueberry biscuit.  Both deserts were brought out by the chef of the Blue Plate, Holly Gilberto, with a twirl and a smile.  We thanked her profusely for an incredible meal while we proceeded to inhale our simple, but tasty desserts.  The brownie was awesome with that perfect balance of chewiness and gooeyness that all brownies simply must possess. 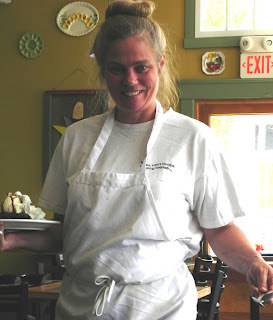 My "biscuit" was warm, not too sweet and carefully walked the line between being a scone and a muffin.  The crust of the blueberry "biscuit" was sweet with a crunchy, sugar glaze but the inside was almost like cornbread with large, juicy blueberries scattered throughout.  I devoured it easily and pushed myself away from the table with a sigh.

We strolled back to the car, sated and completely happy with our choice for lunch at a joint that  is not only fun, but serves consistently delicious food that never fails to please or satisfy.  Even though I had made a promise to myself to try new places, sometimes I just can't help desiring familiar surroundings, friendly faces and a sure-fire guarantee for incredible food and I know I'll never go wrong at the Blue Plate Cafe.
Written by Unknown
Email ThisBlogThis!Share to TwitterShare to FacebookShare to Pinterest