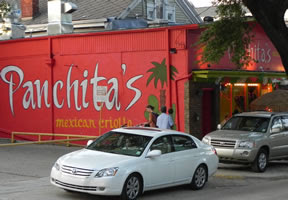 Although disappointed by the disappearance of Big Shirley's on Carrollton Avenue, I have to admit when a new Mexican restaurant took it's place, I was intrigued. You really can't miss this new addition with a building painted a bright pink-orange color and large, white letters exclaiming Panchita's Mexican Criolla Cuisine.  I was amazed at the use of the word "panchita" considering, in California, I had mostly heard that particular term used derogatorily.  Additionally, I had never seen "Criolla".  I thought perhaps it was a way of saying "Creole" in Spanish, but upon further investigation, I discovered that "Criolla" is a term applied to a specific cuisine born in Puerto Rico heavy with Spanish, Caribbean and African influences.

Though I have enjoyed plenty of traditional Mexican food, I have had yet to try Puerto Rican cuisine and was excited by the prospect.  On Thursday night, John and I decided to visit Panchita's (1434 S. Carrollton Avenue) for my 32nd cheat.  I am down 57 pounds. 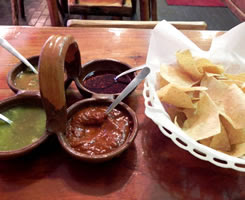 As anyone living in New Orleans right now can understand, traveling on Carrollton Avenue these days can be a serious pain in the butt.  It's not that I don't appreciate the sudden effort to improve our roads and sidewalks, but did they have to do it all at the same time?  Folks living off Carrollton are certainly not the only ones suffering from crazy traffic delays, excessive concrete dust in the air and improvised obstacle courses...but sometimes it certainly feels that way.  At any rate, through patience and perseverance, John and I managed to find our way to Panchita's, sandwiched between the Basil Leaf and GNO Cyclery on Carrollton Avenue.

When we stepped inside, the first thing I noticed was the oddly shaped chairs.  "My behind fits perfectly in this chair!" I exclaimed to John as we sat down.  We both laughed but agreed, they were among the most comfortable wooden chairs we'd ever sat on. Our server came straight away to bring us a basket of tortilla chips and four different types of sauces before handing us menus and taking our drink order.  We looked over the menu while munching on the fresh, crispy tortilla chips and sampling the sauces. 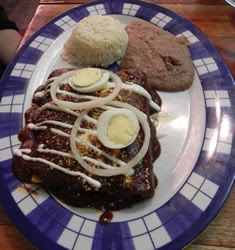 Of the four sauces I only recognized one, a spicy green chile salsa.  The others were unfamiliar to me but all of them were delicious and ranging from mild to very hot on the Scoville scale.  The spiciest sauce turned out to be a creamy chipotle sauce, full of flavor and most certainly fire. The menu was sort of a mixed bag of items, which included dishes that would serve for any meal of the day; breakfast, lunch or dinner.  All of the prices seemed more than reasonable and John and I were easily able to come to a decision.  I selected the Enchiladas de Mole and John chose the Entomatadas.

Before we managed to demolish the entire basket of tortilla chips, our entrees came out on brightly decorated plastic plates.  My enchiladas contained shredded chicken seasoned and then wrapped in fresh corn tortillas and smothered in a delicious Mole sauce.  The dish was also served with rice and refried beans.  The sauce was very flavorful, rich and dark and I was easily able to detect the signature chocolate and cinnamon flavors common to most moles I have tried.  At first glance at the plate, I was afraid it wouldn't be enough food, but by the time I finished, I was quite full. 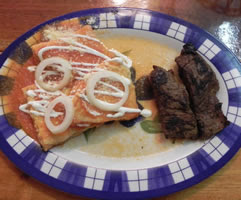 John's Entomatadas were still crispy and warm from frying and the tomato sauce it was soaked in was light, but really flavorful with garlic, onion and a hint of jalapeno.  This particular dish could be served with fried eggs or steak and John had opted for the steak.  There were only two small strips, but the meat was so moist and delicious, it tasted like it had been marinated quite some time before grilling.  John was equally surprised when he found himself full when he finished his plate.  We figured our diet is definitely working since it has been taking a lot less food to sate us.  But you know me, I still wanted dessert! 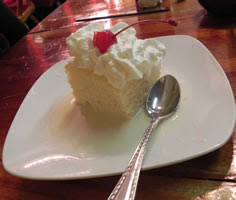 Panchita's offered basic Mexican desserts like flan, but they also touted a "Mexican Fruit Snoball" which featured a selection of fresh fruits like mango, tamarind, melon and watermelon.  Unfortunately, the server informed me that they only had a Tres Leches Cake and Flan Napolitano available that night, so we chose the Tres Leches.  If you've read my cheat blog on Mayas, you'll know that Tres Leches cakes are thick butter cakes soaked in three different kind of milk; condensed milk, evaporated milk and heavy cream.  Although the cake at Panchita's was lighter and more porous than what I am used to, it was still quite delectable.

Because our meal was so tasty and so very affordable, I couldn't help but change my negative connotations for the word "panchita."  Now when I think of it, Panchita's will mean a savory sneak peak into the world of Puerto Rican cuisine...it's all about perspective after all!

I am mad for this place. My boyfriend and I went on a Latin American/Carribean food binge one weekend, and we ate at Panchita's AND at Pupuseria La Macarena and cooked mexican for ourselves. While La Macarena was great, it was so much more expensive than Panchita's that I couldn't help but favor Panchitas' cantina style and simple, affordable deliciousness.

I love it too...I've been itching to return.

creole does mean criolla! but creole means different things to different people i guess. the mix of spanish and african is considered creole. thanks for the review, i'm going to go try this place out tonight!