Revelations at the Piazza d'Italia 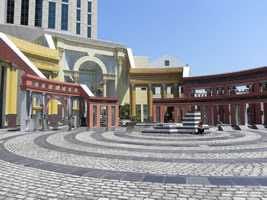 Both locals and transplants alike are going to cringe en masse at what I am about to say, but since this is my blog, I feel the need to be perfectly honest. I loved the movie The Big Easy. Now before you start throwing tomatoes at your computer screen and deleting me as a friend on Facebook...please just hear me out.

My passion for this particular film is not due to the weak storyline, Dennis Quaid's terrible accent (what the hell was he thinking?), or the fact that they turned Tipitina's into a restaurant.  What really turns me on about The Big Easy (aside from the really hot sex scene with Ellen Barkin) is that it allowed me to see glimpses of New Orleans before I had moved here or even had the opportunity to visit, and that was really significant to me.  Seeing streets of the French Quarter in the scene where Ellen's character gets mugged or getting a sneak peek into Mardi Gras World where a lot of the wonderful floats are created offered a view into a city I had only read about. So, as strange as it may sound, the most influential New Orleans landmark, for me, became the Piazza d'Italia, the setting for the opening scene in The Big Easy.

This piazza, this structure that holds nothing honoring the traditional architectural elements of New Orleans, became even more significant to me when I first visited this city with my mom back in August of 1993.  Was it purely coincidence (or possibly fate?) that my mother happened to book a room at a Holiday Inn (now the W Hotel) on Poydras Street that just happened to be right across the street from the Piazza d'Italia? 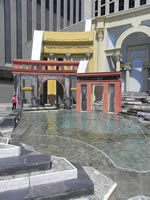 I will never forget it.  We arrived in town late at night and went immedieately up to our room.  The next morning, I opened our curtains only to look down directly into the piazza.  I started to laugh and my mom asked me what was so funny.  "Did you know this hotel was directly in front of the Piazza d'Italia?" I asked.  She just looked at me with a question in her eyes and said "the what?"

So this Post-Modernist structure designed by Charles Moore in 1978 became the very first New Orleans landmark I visited.  Right after dining on a delicious breakfast, my mom and I crossed Poydras Street and wandered around the fountains of the brightly colored piazza. The whole experience felt like some kind of sign telling me that this is where I need to be, that I should finally come and make New Orleans my home.

Then, after living here for a few months in 2003, my friend and I wandered into the Piazza d'Italia after having too many margaritas at Lucy's down the street.  It was a typical steamy evening in New Orleans and we went to dip our hot toes into the fountain and ended up spending several hours laughing and daring each other to hop over the small pools of water, posing like statues in the many niches throughout the piazza.  I felt like I had finally made it, I had finally crossed over into my dreams and made them a reality.

So, locals can poke fun at The Big Easy all they like and poke fun of me for loving it too, but I don't care one bit.  If it wasn't for that awful film and the opening scene in the Piazza d'Italia, I might never have taken the leap that brought me here and for that, I am eternally grateful.
Written by Unknown
Email ThisBlogThis!Share to TwitterShare to FacebookShare to Pinterest