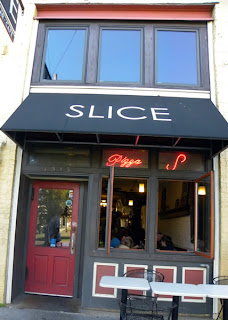 Every week I ask John where he wants to go for our cheat night and every week I turn down his suggestion.  Some might say I am being inconsiderate to my boyfriend’s needs or that I am selfish and uncaring, but you naysayers have it all wrong.  Thursday cheats are mine because I am the one who really needs to diet, not John.  Therefore, I think where we dine should ultimately be my decision.  John could cheat every night and still weigh the same. He was blessed with the “super-metabolism” gene and is as thin as a rail weighing in at 175 pounds, standing 6”4.  He also is caring and understanding, which is why he lets me get away with shooting down his suggestions each week…either that or he really doesn’t care where we go.

Anyhow, this time John suggested we eat at Slice Pizzeria on St. Charles Avenue and much to his astonishment, I agreed.  This is my 31st cheat and I am down 55 pounds.

Both John and I have been to Slice many times…as a matter of fact, before I began this diet you would probably find us there for lunch at least twice a month.  Suffice it to say, I really dig this particular pizza joint and when you work downtown, it is one of the best places to go for lunch regularly without getting bored with the selection. The pizza is always tasty, served in 14 and 16-inch pies as well as by the slice.  Best of all, you can order a half-salad and slice of pizza and walk out spending approximately $8, not bad for consistently delicious, fresh food and a great atmosphere…not bad at all. 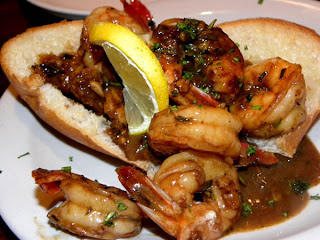 When we walked in at around 5:30 p.m., there were already a few tables taken for dinner and at a wave from the hostess, we helped ourselves to a small booth towards the back.  I resisted ordering what I would normally, a slice of pepperoni and half of a spinach salad, with much difficulty.  I really love their spinach salad, it is always fresh tasting with organic baby spinach leaves, mushrooms, shaved red onion, toasted pine nuts, roasted tomatoes and pepperoni bacon.  Served alongside the salad is a creamy Gorgonzola Crostini and I always select their very different, yet tasty bleu cheese vinaigrette.

Since I wanted to try something new, I steered away from my favorites and selected (with John’s approval) their Barbecue Shrimp as an appetizer and John selected our pie, a 14-inch Meat Lovers’.

Now, I’d heard friends rave about their Barbecue Shrimp before, so I knew I was in for a treat.  The menu says its “Chef Paul’s take on a New Orleans tradition,” and from what I tasted, he’s interpreted it well.  The shrimp were cooked perfectly, popping when I took a bite and the sauce was heavenly.  Seven large pieces of shrimp were served on two large hunks of fresh French bread that caught most of the spicy, garlic-laden sauce, a good thing too or John and I would have been fighting over what was left on the plate. 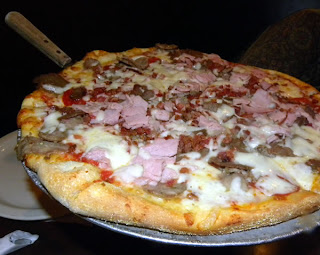 Almost as soon as our appetizer plate was whisked away, our server brought out our piping hot pie, and even John and I realized we ordered too much.  Although we selected the 14-inch, “small” pizza, the toppings were so plentiful, we knew we’d be stuffed after one slice.

Slice’s Meat Lovers’ pie is overflowing with pepperoni, meatballs, Italian sausage, Chisesi ham and smoked bacon.  The quality meat they use is so very delicious (normally, I do not like Italian sausage at all), not to mention the excellent mozzarella cheese and flavorful, crispy dough, these folks really know how to do pizza right…even the sauce is perfect and, if you’re familiar with my fear of red sauce, you’d understand why that is so important to me.

John and I ate two slices each (the second piece being purely gratuitous) and we both decided to skip dessert.  Neither of us could really breathe as we were walking out, but I did manage to eek out a thank you to John for his astute dining suggestion, it was exactly what I wanted.  Perhaps I should listen to him more often?
Written by Unknown
Email ThisBlogThis!Share to TwitterShare to FacebookShare to Pinterest