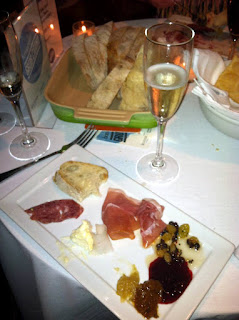 As you already know, I was invited by Belvedere Vodka to attend Saturday of the Bon Appetit Grub Crawl weekend. I was also invited to an event launch, media luncheon at Restaurant August the Friday before. People keep asking me "Well Kim, how was it?" and I am hesitant because, after all, for me this whole shindig was free. "If it's free it's for me!" my friend Shalom always quoted and I often mimicked, but sometimes...it's just not.

So, let's assume I paid $200 for the Grub Crawl on Saturday, $100 per person. John and I were placed in Group A that started at Domenica. We were met at the door by two flustered greeters in "Grub Crawl" t-shirts. They signed us in, slipped on our wristbands and then told us to "feel free to wander around" before an anxious restaurant employee led us through the kitchen to a room set aside for the crawl. I'd been in this little tasting room before when judging for the NOWFE Fleur de Lis Awards and while it was fine for a group of six, it was extremely crowded for 25-30 people. Folks were jockeying for prime standing space located at one of the four, small tables, trying to find room to put down heavy, rectangular plates filled with cured meats, pickled vegetables, aged cheeses, preserves and pizza. The food was utterly fantastic, but the experience...not so much. That is unless you'd enjoy standing around sweating in close proximity to other people standing around sweating, fighting your way to the food table, and getting bumped and snapped at by frustrated servers in a dark, noisy room? Yeah, I didn't think so. 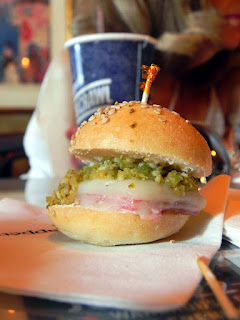 We knew from the map that our next destination was the Napoleon House on Chartres, so when John and I had plainly had enough of being squashed, we decided to start walking over until one of the Grub Crawl guides stopped us and said we should wait for the shuttle. No problem! We were heading back into the dining room to take a break from the cluster when an extremely rude, short woman with long, dark brown hair hustled us back into the sweat pit and told us to start walking. Stunned by such obnoxious behavior, I told her that we were waiting for a shuttle and wanted to spend that time somewhere cooler. She literally barked in my face "There's no shuttle! Walk people! Get walking!" Now I realize I'm a fat sow who could care less about exercise, but there was no reason for her attitude. I'm pretty sure this woman is a host or Maitre 'd at Domenica and I swear to God, if I see her the next time I visit, I will turn around and walk back out. I adore Chef Alon Shaya and will greatly miss his excellent food, but that woman needs to learn some manners. 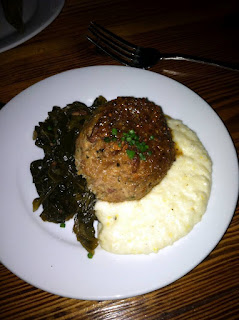 After being unceremoniously herded outside, we waited patiently for our shuttle while watching the backs of other locals making their way to the Napoleon House. We arrived at the Chartres Street restaurant in good time, sat down and relaxed while sipping on ice cold Pimm's Cups and munching mini-muffulettas. Unfortunately, the drinks were rather weak (I love me a good Pimm's Cup) tasting pretty much like 7-UP and the muffulettas tasted like frozen hors d'oeuervs re-heated for our pleasure. At least we had plenty of room to sit down.

Our next stop was Sylvain and since the two restaurants were so close together, the staff at Sylvain was scrambling to set up between groups. During that time, we lined up and waited in a hot hallway, looking inside through small-paned windows at a darkened restaurant that just oozed "cool." When we finally filed inside, we were treated to an array of pickled peppers, cucumbers and okra and a bitter beer cocktail that was interesting, just not for me. We were also served a fried cake of pulled pork shoulder served atop buttery grits and delicious turnip greens. 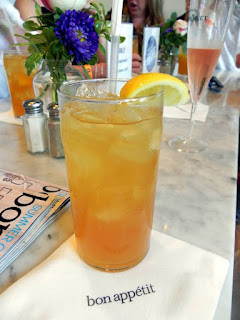 Next stop was right across Jackson Square at Stanley. As you probably know, I've been to Stanley many, many times before and have often dined on what we were served, Breaux Bridge Eggs Benedict. There was also a cooling cocktail concocted from Belvedere Lemon Tea vodka, lemonade and iced tea. Everything was delicious and the group was treated to a wedding second-line that started right out in front of the restaurant.

At last we strolled to our final destination, the one I had most anticipated, Stella! Restaurant. Unfortunately, it was the most disappointing.  What we got was a sad little sliver of bread smeared with a simple egg salad and sprinkled with local caviar and instead of "specialty cocktails" we received a sparkling rose spritzer, that while tasty, was not what we had hoped for. John and I were supposed to head to the Joy Theater from there for a concert featuring local singer Theresa Anderson, but we were done and all we wanted was to go home. 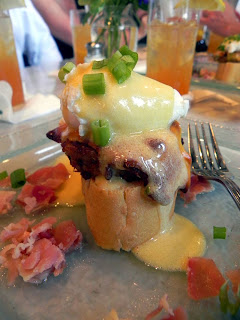 Now, had we paid $200 for the Grub Crawl, I would have been pretty irritated. I did hear that the concert was wonderful, and perhaps we would have been in a better mood about the whole adventure had we gone, but what we experienced was, in essence, not worth it. I'd rather take that $200 and have an wonderful dining experience at one of those restaurants, like Domenica or Sylvain, instead of being slogged through all five spots.

The best experience overall was the media luncheon at Restaurant August. Surrounded by heavy-handed mixologists and handsome chefs serving outstanding cocktails and delicacies a-go-go...that's what the crawl should've been like. I'd pay $100 for that kind of experience in a heartbeat.

*PS - Sorry about the pictures! The light just wasn't very good in most of the restaurants, except Stanley!
Written by Unknown
Email ThisBlogThis!Share to TwitterShare to FacebookShare to Pinterest

Nice overview and right on! Btw, the three day event was $199, but there were one-night prices around $79... FWIW.

See now, the weekend pass would've been more worth it if I could keep up! But, the Saturday cost with concert was $99. Which included an open bar...so not too terrible. Just not for me I guess!