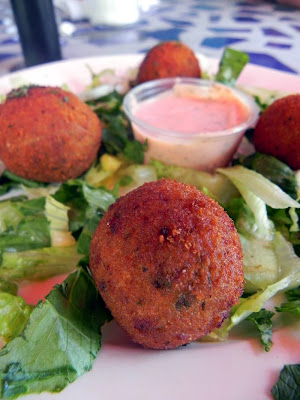 A couple of weeks back, John and I were cabbing it back home and while gabbing with the driver, we got into a conversation about food. Our driver was an elderly black man who was born and raised in the city and, although I know where I love to dine, I always like to ask, "What's your favorite restaurant?" As if suddenly exhilarated, the cabbie got quite excited and said, "I'm gonna tell you the best spot in town and if you don't like it, you can call me and I'll pay for your lunch" Laughing, I teasingly told him to be careful because I might just take him up on his offer. He just smiled and said "I ain't worried. Just you go to Neyow's and see for yourself."

Located on the corner of Bienville and N. Jeff Davis, Neyow's Creole Cafe shares territory with two other popular neighborhood restaurants (Liuzza's and Katie's), yet it was still packed to the rafters when I visited last week. It was a girls' day this time, so while John stayed at home, my friends Anne and Candy joined me  for a particularly gluttonous lunch. 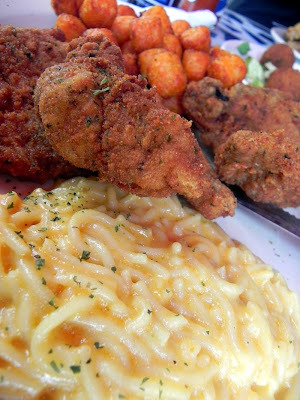 At first we thought we wouldn't be able to find a place to park, but then we saw that Neyow's conveniently has their own parking lot across the street. As we walked towards the door, a big guy coming out, cleaning his teeth with a toothpick, glanced at us and smiled, "Oh don't you ladies worry," he said. "I saved some for you!"

Rather than waiting inside, we decided relax at a table in the shade outside and enjoy the pleasant day. After quite a bit of hemming and a little hawing, we decided what we wanted and placed our order. First up were the Crawfish Balls which were simply crab cake wrapped around a crawfish tail, rolled in breadcrumbs and deep fried. They turned out to be pretty tasty and had a decent crab-to-crumb ratio that actually surprised me.

Before we chomped down the last ball, our entrees arrived. Both Anne and Candy ordered the red beans which came out as a platter-sized pool with a small pile of rice along the side, but Anne chose the Southern fried chicken while Candy opted for the breaded pork chops. Although the red beans were plentiful, they were a bit bland, but a little doctoring with the help of Crystal Hot Sauce and S&P, it was all good. I got to taste a bit of Anne's delicious fried chicken, too. The meat was juicy and the skin was wonderfully crispy. Candy also got a side of cornbread that came out in a huge slab that we all shared. It was sweet, dense, buttery, crumbly and reminded me of home. 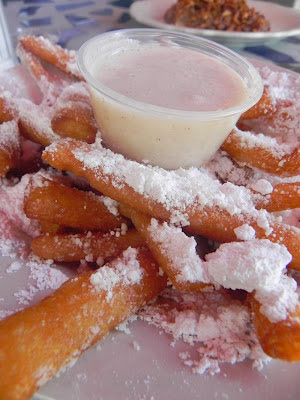 There was no need for me to try Candy's entree because I ordered the Pork Chop Plate that came with three breaded and fried chops and two sides; sweet potato tots and mac & cheese. Thin, juicy and addictive, I finished a chop and a half before I even tasted anything else on my plate. The tots were perfectly crunchy on the outside and tender and sweet on the inside, but after eating quite a few I barely put a dent in the mountainous pile. I also really enjoyed the buttery, creamy mac & cheese made from what looked like broken spaghetti noodles.

Finally, after eating as much as we could without bursting right there at the table, we requested to-go boxes for our plentiful left-overs and proceeded to order dessert. Because we couldn't decide between two particular items, we got both and didn't regret it one bit. Their Beignet Sticks turned out to be just that, a pile of crisply-fried, stick-shaped beignets covered in powdered sugar and served with a cinnamon sugar dipping sauce. The second dessert was my personal favorite though, a Pecan "Cobbler" that seemed to be a really sloppy slice of Pecan Pie without a whole lot of crust. Sloppiness aside, it was the most delicious Pecan Pie I have tasted in quite a long time and that includes my own creations as comparison. To top it all off, the entire gut-busting lunch for the three of us came to a grand total of $50! Great food at great prices? No wonder this place is so popular.

I think I should track down that cab driver and take him to lunch!