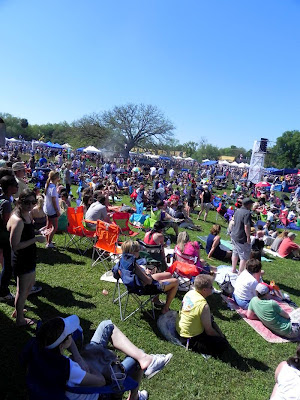 Last week, I spent a ridiculous amount of time eating. A day and a half tasting dishes all over the city for the New Orleans Wine & Food Experience and a delicious media feast at Dijon Restaurant located in the old New Orleans firehouse on Annunciation were more than enough to do me in for a good while. I had planned a fast involving several gallons of water and only frozen blueberries to sustain me for the rest of the week just to recover. Then on Friday, I get a call from an employer asking if I would be interested in judging the biggest pig-out session of the season, Hogs for the Cause.

How could I refuse! In only three years, Hogs for the Cause has become one of the biggest events in New Orleans. Chefs, smokers (hehe) and grill masters from all-over compete to see who's the "Sultan of Swine" and raise tons of money for families caring for children with brain cancer. Nobody loses! 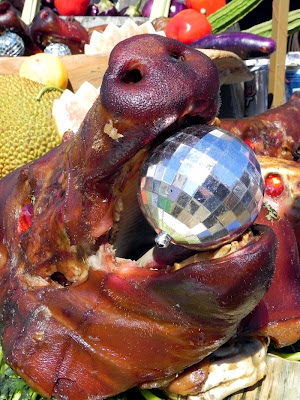 The sun was shining on a very muddy City Park due to heavy rains right before the cook-off. Many folks thought ahead and trudged through the masses in rain boots while others just took off their shoes and let the mud squish between their toes. It certainly didn't slow down the crowds and I couldn't help but giggle because it was hilariously appropriate, after all. While I undertook my judging duties, John wandered around, grubbed on some Messin' with Texas soft tacos from Taceaux Loceaux and pulled pork nachos from a mystery team that he does not recall.

At the judges table under the Boss Hog tents, I sat next to Chef Chris DeBarr of one of my all-time favorite restaurants, Green Goddess. We drank NOLA beer and tasted several different, anonymous contestants who submitted for the Whole Hog category. We dove into Styrofoam boxes laden with meat filled with everything from the cheeks to the crispy, fatty skin. The table favorite was definitely #8 and we stashed that box aside to enjoy later. I also really liked the skin from #24 and I am sure I ate too much of it.

After gorging myself on what felt like a whole pig, John and I got a gelato from the bright Sucre truck and vegged out on the grass. We watched people dance to the the Voice of the Wetlands All-Stars and relaxed for the rest of the afternoon under the sun.

It's official, I have the best job in the best town in the whole world. You couldn't drag me away...