Making a comeback at Redemption 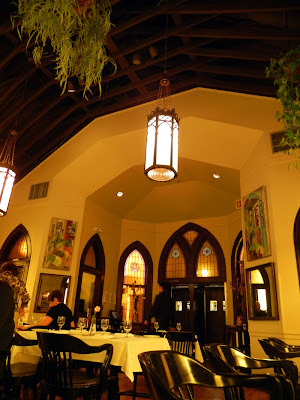 Choosing Redemption: Orleans Revival Cuisine last weekend for Sunday Jazz Brunch was kind of what you'd call a risky "do-over" considering our experience at Chef Picolo's last restaurant, the recently shuttered Bistro at the Maison de Ville. But, I had hopes that in a new environment with a larger kitchen and fresh staff, his love of cooking might just blossom anew...I believe I was right.

Found on the corner of N. Scott and Iberville Streets in Mid-City, the church (originally build in 1917) that houses Redemption was once the neighborhood favorite Christian's Restaurant. Though slow-going after it's grand re-opening almost a year ago, Redemption's recent addition of Chef Greg Picolo has revved up it's image and drawn in quite a lot of fans since his arrival.

We arrived for brunch at around noon and were seated immediately. There were plenty of tables available in the large dining room and the voice of lone jazz pianist RuthAnn "BabyRuth" Kerr carried proudly up into the tall, wood-beamed rafters adorned with hanging greenery. We browsed through the menu, crossed out fingers and placed an order. As it turns out, we had nothing to fret about... 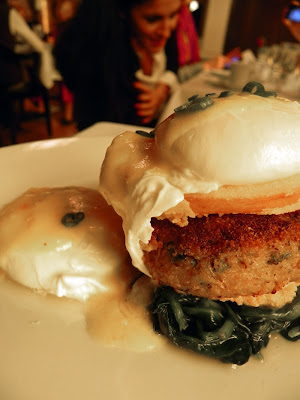 I started with the day's special soup, a tasty, broth of Crawfish, Corn & Pumpkin that I devoured rather quickly. John chose the Prawns del Lago which arrived as three huge pieces of shrimp that were golden battered, stuffed with Blue Crab and drizzled with a creamy Remoulade. I was lucky to get a bite!

For my entree, I chose a classic New Orleans brunch item, Grits & Grillades. Medallions of baby veal were pounded thin, breaded and pan fried with a sauce of braised peppers, caramelized onion and a rich demi-glace reduction. All of this lusciousness was balanced atop a small mound of creamy, buttery grits that absorbed the wonderful sauce. John stole several bites between my oohs and aahs, but I managed to score a few forkfuls from his plate as well.

John ordered the Crab Cake Benedict. A perfectly poached egg was balanced atop a fried tomato slice centered on a thick, moist crab cake sitting in a pool of sautéed spinach and the whole ensemble was draped with a tangy, truffle Hollandaise. Both of us had leftover sauce that we sopped up with warm, French baguettes. The bread basket also provided me with a sweet potato biscuit while John munched on a poppy seed muffin.

Finally, I simply had to get dessert along with a foamy, rich cappuccino. I chose something on the lighter side this time, Strawberry Crepes filled with creamy mascarpone cheese and honey. They were sweet, but not too sweet, light and refreshing after a decidedly heavy breakfast.

It seems I've been converted! Hallelujah!

Btw but since i`m not back in NO yet i`m gonna try making the Crab Cake Benedict at home with the truffle hollandaise, if it turns out good imma post a pic on my FB:-)