Comfort and convenience at Down the Hatch 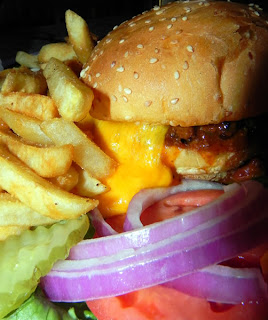 In the relatively short time that I have lived in New Orleans, the restaurant/bar space on Sophie Wright Place has gone through several incarnations. When I lived in that area, it was the Moonlight Cafe serving burgers and sandwiches, but with a Persian twist. The burger patties tasted like my father's version of chelow kabab and I couldn't resist calling in a delivery for a taste of home every now and again. The Persian owner would often be the "delivery man" and we'd chat about how much we missed our grandmothers' fabulous stews (koresh) or meatloaf (kufteh) which he wouldn't even dream of attempting to re-create.

On Thursday night, John and I decided to visit the latest eatery at this location, Down the Hatch, which has been open for almost a year. This is my 53rd cheat and since I gained two pounds last week (do you think it was the ice cream?), I am back to a loss of 70 pounds.

Feeling altogether lackadaisical, John and I sought the simplicity of bar food. A juicy burger, perhaps some deliciously greasy onion rings and a few beers seemed the perfect evening for this week's cheat. We just weren't in the mood for anything too fancy, too socially demanding or too expensive and (no offense meant) the easy going atmosphere at Down the Hatch was the perfect solution. Halfway through our first Abita, our server brought out our appetizer, something we considered a rather usual choice for us, their Hell's Kitchen Chicken Wings. Maybe it's because they're so messy or that they tend to be far too hot for too little reward, but I usually don't like chicken wings...and unfortunately, I still don't. Fried and then slathered in their "house made" sauce and served with a side of bleu cheese dressing, these wings were most definitely from hell solely because of the sauce. The meat was juicy and the dressing was thick and creamy, replete with large chunks of bleu cheese, but the sauce just about burned my face off. It consisted mostly of Tobasco and it severely challenged both my stomach and my tongue's high spice tolerance to eat only three wings.

Fortunately, we were saved by another round of Abitas and our anxiously awaited entrees. John got the Chili Cheese Burger that was undeniably juicy and loaded with melted cheddar and (not nearly enough) of their tasty home made chili. The burger also came with a fat pile of crispy, steak fries that we were unable to finish. 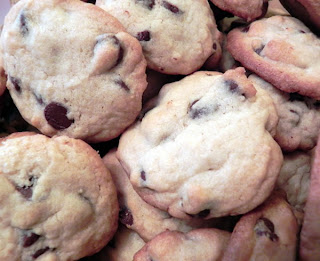 I selected their Reuben, which is one of my all-time favorite sandwiches, and did not regret my choice one bit. Luckily for me, the corned beef at Down the Hatch is also made in house was lovingly piled between two toasted and buttered slices of light rye along with hefty helpings of sauerkraut, Swiss cheese and Russian dressing. The corned beef was surprisingly juicy and the sandwich definitely held up in comparison to other fabulous Reuben's I've enjoyed around town. It was accompanied by a pile of thinly sliced,"string" onion rings that were a nice change from the thick-cut style to which I've become accustomed.

They don't offer any desserts, but that wasn't too much of a problem since there was a whole batch of chocolate chip cookies at home that I had baked the day before. As we were heading out to the car, we noticed that Down the Hatch also offers citywide delivery, a convenient and possibly highly profitable move. After all, do you know of any other neighborhood joints that deliver juicy burgers and hot po'boys anywhere in New Orleans? Neither do I...
Written by Unknown
Email ThisBlogThis!Share to TwitterShare to FacebookShare to Pinterest