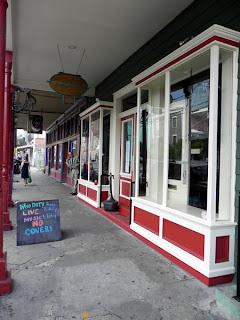 Long before I delved into the worlds of The Iliad and The Odyssey, I was a huge fan of Greek mythology. Characters like Medusa with her serpent-ridden hair and Charon the skeletal ferryman who received payment in gold coins to carry travelers to the Isle of the Dead were of great interest to me, symbolizing all I love about fantasy and feeding my over-active imagination.

When I moved here, I couldn't help but appreciate that many of the street names (regardless of their unique pronunciations) were for muses like Clio, Calliope, Erato, Melpomene, Terpsichore and Thalia.  Additionally, a lot the Mardi Gras "krewes" in the Greater New Orleans area are also named after Greek and Roman characters like Bacchus, Morpheus, Pygmalion and Zeus.

So, naturally it was no surprise to me when a new restaurant opened called The Three Muses. Although it has been debated, it is generally agreed that there were actually a total of nine muses, but the concept of three is often repeated. Traditionally, the three muses are song, occasion and memory, but in the case of this brand new restaurant in the Marigny, they are Daniel Esses (cuisine), Sophie Lee (music) and Christopher Starnes (hospitality). 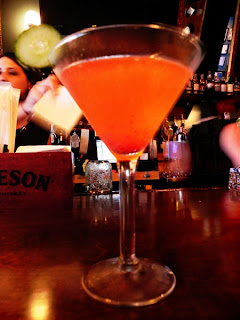 On Saturday night, John and I drove all the way across town to experience the music, food and atmosphere that is The Three Muses. We planned to meet our old boss and friend Carl at the restaurant sometime around 5:00 p.m.  Since we arrived so early in the evening, we were able to score an excellent parking space that was just around the corner from the restaurant.  We walked inside to find the chic, French-influenced tavern (several ornately framed mirrors lean out from the walls) pretty much empty.

The problem was finding a table to seat four.

There was one table that accommodated more than four people, but it was currently taken, so when Carl and his girlfriend Beth wandered in, we chose to sit right at the bar. Unfortunately, our seating arrangement and the sounds of a jazz band playing in the front made for awkward conversation. 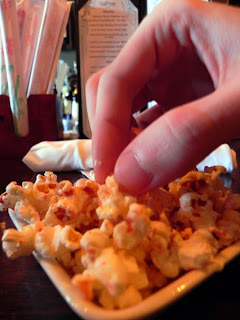 Since talking wasn't easy, we all immediately dove into the menu. I ordered one of their specialty drinks appropriately dubbed "The Muse." The cocktail includes cucumbers and strawberries with St. Germain Elderflower liqueur (what is with New Orleans' obsession with St. Germain?) and Hendrick's gin. Although the cocktail had a nice fruity, herbal flavor, I would've loved some thinly sliced, muddled cucumber or even strawberry as opposed to the strange pulp I found at the bottom of my glass.

I ordered a ton of different plates since they all seemed "tapas-sized" and hoped they might arrive a bit spaced out.  First, they served us a small plate of Indian-spiced popcorn as an amuse bouche of sorts.  It was tasty, buttery and hot and we all had no problem devouring it.

Next, Carl and Beth got some Rabbit Empanadas with sun-dried tomato aioli.  I didn't get to try these but they looked light and flaky, very similar to a really good meat pie.  They also ordered a Duck Confit & Rigatoni pasta that I did manage to taste. The pasta was nice, but I liked what John and I ordered even better. 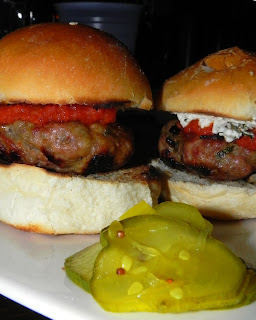 Although the Falafel Bits drizzled with a simple yogurt sauce were rather plain and a bit bland, I absolutely loved the Lamb Sliders with tomato chutney and goat cheese. Lamb can be a very finicky meat, something easily ruined by over or even under-cooking, but the sliders were perfect!  Wonderful, Mediterranean flavors permeated the tender, juicy meat and I was hard-pressed to find another plate I adored nearly as much throughout the remainder of the evening.

The next arrival was two, rather large Lobster Egg Rolls served with a sweet, chili-lime sauce. Despite the fact that the egg rolls were crispy and delicious, I had a difficulty tasting the lobster which is my all-time favorite shellfish. I would eat a vegetable (read cheaper) version of these in a heartbeat as all the Asian flavors and veggies were present and accounted for.

As always, I was really excited to taste their Ceviche and chips, loving ceviche as I do.  The flavor and texture of the fish was awesome, I only would like to suggest that the hunks of fish be a bit smaller.  At one point, I felt like I was hoisting an entire fillet onto my tiny (by comparison) tortilla chip. 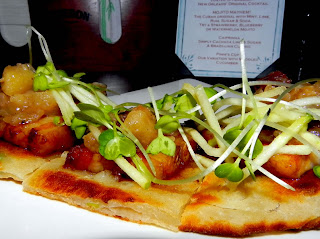 I didn't expect to find a dish to beat out the Lamb Sliders until I tasted our final savory dish of the evening, the Braised Pork Belly with apple chutney and scallion pancakes.  It was a taste of the divine on a pancake with the rich, fatty flavor of the pork belly juxtaposed against the sweet apple chutney (pork chops and apple sauce?).  Both Carl and Beth agreed.

At last, we all were ready for dessert and we ended up with two orders of the same dish.  After all, would you be able to resist your own plate of Banana-"Marscapone" (oops!) Strudel with rum butter and Mexican-chocolate ice cream?  I wouldn't!  It was absolutely delicious and I especially loved the cinnamon-spicy flavor of the ice cream...I would return to the Three Muses for that dessert alone. 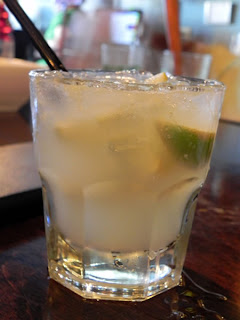 After dinner, Beth had to run out for a scheduled gig at Cafe Negril just down the street. After enjoying one more cocktail (I had to try their delicious "Caiprinha" - where's that darned spell checker at? - made with Cachaca, sugar and lime), John and I walked over to the club and for a while enjoyed the Celtic stylings and bawdy lyrics of Beth Patterson (check out Beth and Carl's collaboration, Potent Bathers) and then made our way home.

Although they've only been open since early August, I was impressed to find that The Three Muses had developed a potentially inspiring menu that requires only a few minor tweaks. They've definitely aroused my interest...and repeat patronage.
Written by Unknown
Email ThisBlogThis!Share to TwitterShare to FacebookShare to Pinterest

eToro is the best forex broker for novice and full-time traders.