Delicacies come in a modest package at Restaurant Patois 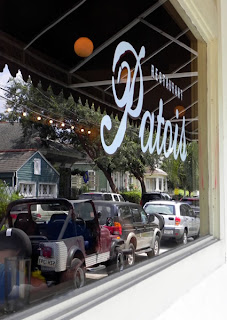 “Modesty is not only an ornament, but also a guard to virtue” -Joseph Addison

Only three short blocks from the Audubon Zoo on the corner of Webster and Laurel Streets, there's what appears to be a humble neighborhood bistro complete with awning and chalkboard specials called Restaurant Patois. Yesterday, John and I carefully avoided tiny lizards scrambling across our path in droves, crossed the street and stepped inside the unassuming, yet elegant eatery for a leisurely lunch. It was my 50th cheat and I'm down 69 pounds.

Like everyone in this town who gives a fig about food, I'd heard the wonderful accolades about Chef Aaron Burgau and his fabulous cuisine, but I thought it was about time I tried it out for myself. In all honesty, I was nervous about appearing in my usual attire. I was under the impression that my lime-green Birkenstocks and hasn't-seen-a-salon-in-moons hairstyle would be frowned upon and I did my best in a short period of time to look as presentable as possible.

As it turns out, my fuss was all for naught. 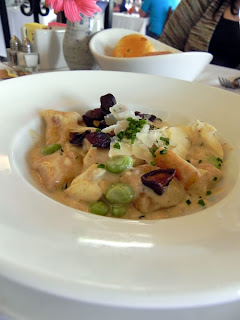 Don't get me wrong, I'm sure the proprietors would appreciate it if you avoided arriving in flip-flops, cut-off jeans and a wife-beater, but the aura was really rather casual, so I felt right at home.

The restaurant was already busy when we arrived at around noon, but the gracious host quickly seated us at a nice little two-top, proffered simple menus and filled our wine goblets with ice water. There was some serious deliberation about our appetizer after a woman at the next table received a huge bowl of mouth-watering Moules frites (mussels and French fries), but we finally made our selections.

Our server brought out our drinks with a basket of warm rolls. John reached out to take one and I reminded him that he might want to save that for dipping. He sighed, but let his hand drop. "I promise you'll be thanking me later, sweetie." I said. 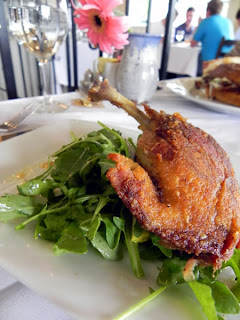 Our appetizer was tender Potato Gnocchi served with moist lump crab meat, fresh-from-the-garden baby lima beans, Porcini mushrooms and shaved Parmesan cheese. The gnocchi were a bit larger than what I've eaten in the past, but that didn't deter from the light, fluffy texture, they almost melted in my mouth. Unabashedly, I squealed "No!" when the host attempted to remove our plate before we had finished wiping the bowl clean with our flaky, buttery rolls that we had saved precisely for this purpose.

We let the host remove the dish only after it was completely spotless and our entrees arrived. Totally out of character, I had ordered a salad, but this was no ordinary salad, it was a Duck Confit Salad with arugula, sliced pears and pear vinaigrette. It's funny, because after lunch yesterday I was describing my dish to a friend and she asked me "What does 'confit' mean?" and when I told her it means the meat is cooked in its own fat, she took a deep breath and said "Ohhhh my!" 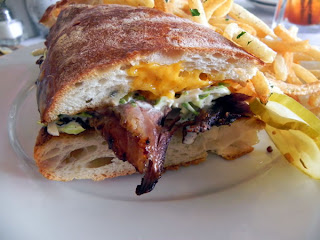 Oh my indeed! The duck had an extra crispy skin that I was tempted to pull off and eat whole, and the meat was so tender and juicy, it slid easily off the bone with my fork. The "perfect" bite came when I got all of the ingredients together on my fork; the sweetness of the pear, the rich, heady duck and salty skin with a few leaves of the peppery arugula.

I was able to feed John a few bites of my delectable salad, but he had his hands full with a Beef Brisket sandwich topped with creamy coleslaw and melted aged cheddar on, my favorite, ciabatta bread. This massive man-sandwich was served with a large pile of delightful French fries that I suspect were drizzled with a little truffle oil. I adored the flavor of the brisket, especially the chewy end slices that were extra spicy and flavorful. Since it was just a tad too much sandwich for John, I got to help him finish it. 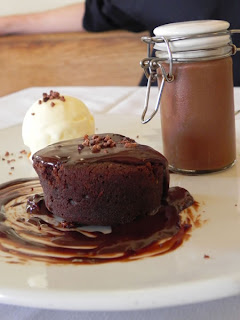 For dessert (you didn't think I forgot dessert did you?) I chose the Chocolate Hazelnut Gateau created by pastry chef, Lisa Gustafson. This has to be the coolest dessert with the most interesting presentation, that I have ever had the pleasure to devour.

The "gateau" was a small, dense and thoroughly rich chocolate cake filled with chopped hazelnuts and covered in thick chocolate sauce. Budino, as it turns out, is Italian for pudding (yep, I had to look that one up) and this delectable concoction was served in a sealed and chilled glass canister! To top it off, there was a perfectly spherical scoop of Frangelico ice cream delicately balanced atop a disc of a delicious, buttery hazelnut brittle.

I was so completely wowed by our entire lunch, that it took a while to process it all. I've settled for so much less and paid so much more at other eateries (including chains) that my negligence required a firmly planted facepalm and a heavy sigh of exasperation.  All I can say is that I never would have guessed how wonderful food could really be before I'd tasted the work of culinary geniuses and Mr. Burgau is definitely, in my oh so humble opinion, in that number.
Written by Unknown
Email ThisBlogThis!Share to TwitterShare to FacebookShare to Pinterest