A taste of the Mission at Juan's Flying Burrito 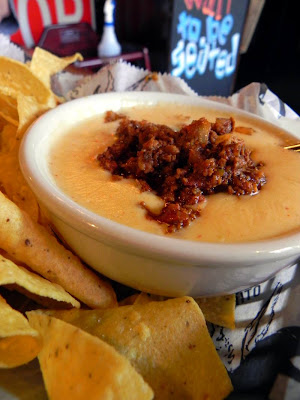 When people ask me what I miss most about living in California, aside from the obvious answers like my family or the beach, my most common answer is Mission-style burritos. Often I find myself craving the huge, inexpensive burritos loaded with well-seasoned meats, rice, beans, cheese, shredded lettuce and tomatoes and served with free tortilla chips, salsa and tasty condiments like whole pickled jalapenos. A feast such as this would easily feed me for two meals and all for less than $12! While there's nothing exactly like this in New Orleans, I can get pretty darn close at Juan's Flying Burrito.

John and I have been to Juan's on many, many occasions and at both locations, but last week we headed for the original on Magazine Street. Perhaps it's the loud music blaring through the restaurant with chefs singing along while they work, the heavily tattooed servers or the eclectic decor (who doesn't love a chandelier made from Patron bottles?), but we prefer this location to the Juan's on Carrollton Avenue - even though the Mid-City restaurant is closer.

We arrived late in the lunch hour and after some dithering about where to sit (I wanted the best light for pictures), we opted for one of the larger booths in front. Dani and her 2-year-old daughter Posie were with us and we all pretty much knew what we wanted until we spotted the colorful, chalkboard specials adorning the walls and were forced to make some adjustments. Our server was prompt, helpful and before we knew it, our drinks and appetizers arrived in a flurry. 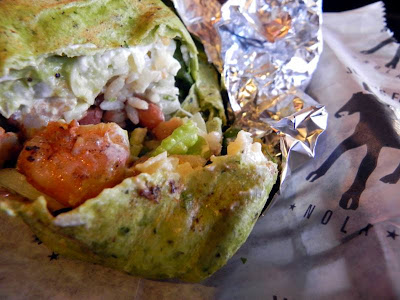 It was hard to make everyone wait while I snapped shots of one special, their house made Chorizo Queso. The aroma of the cheese and sausage together was overwhelming, so I worked fast and got the best images I could before the first chip was dipped. Everyone agreed that we had made an excellent choice after tasting the creamy, melted cheese and the warm, cinnamon-rich chorizo...even Posie! We made quick work of the queso and had to request another basket of their fresh, crisp tortilla chips in order to scrape up every last drop.

Before we finished inhaling the appetizer, our entrees arrived. Posie was feasting on her own order of creamy, fresh guacamole while Dani enjoyed their Shrimp Quesadilla with an extra helping of sour cream. John fell back on one of our favorites and their namesake dish, the Flying Burrito which features grilled steak, gulf shrimp and chicken with cheddar, jack, yellow rice, black beans. salsa and guacamole in a grilled Chipotle tortilla. I veered from the norm and chose another special, the Shrimp Hooligan burrito that touted "twice the shrimp" and I can confirm that's not a lie. Plump Gulf shrimp were rolled into a grilled spinach wrap with jack cheese, refried beans, rice, sour cream and salsa. Though it was delicious, after a glut of queso dip I was able to finish less than half of the monster burrito (John had the same problem), but I wasn't complaining, because now I didn't have to worry about what I was having for dinner...