House of the week: Creole cottage on Bourbon Street 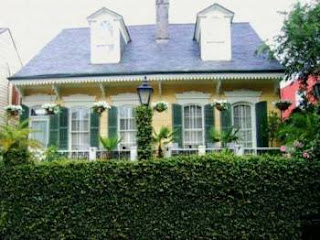 Remember last week's post, when I found the perfect, parade-friendly house? Well, this week I'm going to "kick it up a notch." Though I would love, love, love to live in the French Quarter, the last street in the city I would want to live on is Bourbon Street. I know all you visitors out there just can't seem to get enough of the blaring pop music, barkers, flashing lights, karaoke, go-cups, flashing and strip bars, but as much as I adore this wonderful city, I detest Bourbon Street in almost equal measure. I would rather live in suburbia out in Kenner then on Bourbon and if you know me, that is really saying a lot.

Keeping all of this in mind, if I had to buy a home on Bourbon Street, it would definitely be a place like this Creole cottage near the corner of St. Phillip. At the "quieter" end of the infamous street, this house was built in 1820 and (unlike a lot in the Quarter) is set back from the sidewalk and has a nice, big hedge offering a bit of privacy. It's a stunning property with all the good stuff; original wood floors and moldings, high ceilings, floor-to-ceiling windows and plantation shutters. Interestingly enough, the house is actually split into two separate apartments with a total of five bedrooms, five bathrooms, lush brick courtyards, breakfast nook and a rec room!

Though, as I mentioned before, the house isn't surrounded by strip bars and flashing lights, Lafitte's Blacksmith Shop is right next door. It is said to be the oldest continually occupied bar (since 1772) in the United States and possibly one of the hideouts of famed pirate Jean Lafitte, the scallywag that helped General Andrew Jackson defend New Orleans against the British in 1815. Who knows? Maybe he hung out next door, too? Perhaps there's a hidden stash of Spanish galleons in some secret, underground cavern? I'd certainly need a great cache of gold to buy this beauty listed at $1,600,000.00.
Written by Unknown
Email ThisBlogThis!Share to TwitterShare to FacebookShare to Pinterest

Very Cool cottage Kim..Love it..even though its on Bourbon..Id stay there! :)) Thx for sharing it!

Kim, back in the early 1980's this house was divided into 7 apartments. (I had the two floor to ceiling windows on the right. At the time that I lived there, the window on the far right was a door.) It was a great abode for a 20-something, 1st-job-out of college, girl from Baton Rouge. My rent was $200 per month. My apartment overlooked the garden of Lafitte's Blacksmith Shop. I could lay in bed & here Miss Lillie play "La Vie En Rose". Miss Lillie was a lady of indeterminate age who played the piano there. She had a red beehive & I often ran into her walking her poodle in the Quarter. This was back when the quarter was still affordable, some what squalid & very bohemian. Alas, now it is a haven for the very rich & the merely affluent seeking condos. I only lived there for one year. Yes, it was very noisy & parking was a nightmare even then. But it was a great balcony for a Mardi Gras party, which I had that year. I moved uptown shortly there after. One year in the 900 block of Bourbon street was enough to satisfy all my fantasies & delusions of living in the French Quarter!

Karin, that is a freaking awesome story! Thanks so much for sharing it with me, really. I love it when people tell me their unique experiences in response to my posts, it's the best part about writing them!

I agree that was an awesome story! That house looks wonderful though and isn´t on the worst part of Bourbon, i think i could live there..I`m one of those who keeps coming back to Nola again and again and i stayed on Barrack st last summer before i moved over to a friend uptown.