Sampling a scrumptious imagination at ROOT 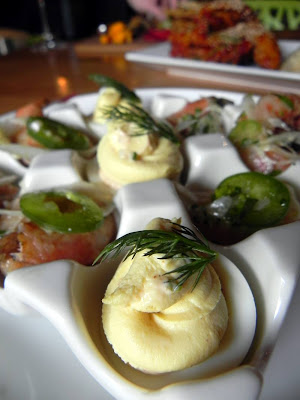 Being an aspiring writer, I love creativity in all of its many forms. I am continuously struck by the work of painters, sculptors, photographers, dancers, singers, musicians and yes, chefs. Great chefs have the ability to to seduce our senses, test the complexity of our palates, challenge preconceived notions and awe us with a symphony of flavors and textures that will literally bring tears to our eyes. I truly believe that Chef Phillip Lopez is one of those amazing innovators who has just begun to entice us...

Last week, John and I took a cab to the Warehouse District's newest gem, ROOT. There were only a few other diners when we arrived right in the middle of the lunch hour, but Mardi Gras' biggest weekend was just kicking off and I think most people were still claiming their spots along the route.We were immediately seated at a window-side table with comfortable, bright green chairs and our extremely attentive server brought us menus, along with a concise description of some of his favorite dishes. 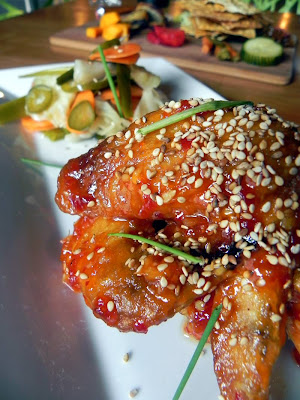 After placing a huge order (determined to go overboard), we watched the minimal traffic roll by on Julia Street sipped at our drinks and watched the plates being brought out to other diners with envy. But, thankfully, we weren't tortured for long.

We chose a dish from each section of the menu to share - a "social", "beginning" and "middle"- and first to arrive was a charcuterie plate featuring the "CBD” chicken, beef, duck-poached ballotine which is kind of like a sausage. Served alongside was a large array of pickled goodies like squash, baby carrots, turnips, cucumbers and even strawberries! There were also some crispy, lavash-like crackers and our very own tube of the house strawberry "mustard". We gobbled everything on the board except for a few stray crackers and those only survived because we were sorely tempted by the next two plates.

One thing I love to eat (and make) is deviled eggs and when I saw the Louisiana Pickled Shrimp with shrimp stuffed deviled eggs on the menu, there was no two ways about it. Though the serving dish was placed in front of John, I couldn't help reaching over almost immediately, plucking one of the eggs from the plate and popping it into my mouth. It was so creamy, tangy and delicious that I could have eaten all of it to myself, but John and I fought tooth and nail over the last heaven-filled egg, which was the odd man out. The pickled shrimp were equally divine, perfect plump texture reminding me of ceviche, but delicately "cooked" with vinegar instead of lime. 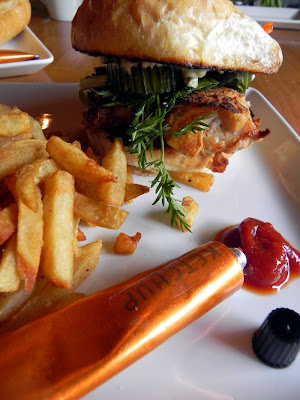 The aroma of our third dish, the “KFC” - Korean Fried Chicken Wings with a pepper jelly glaze and house made kimchi - had us drooling before it even reached our mouths. The crispy, deep-fried chicken wings covered in that super-spicy glaze had us smacking our lips and reaching for our water goblets at the same time. Not your typical wing fan, I was blown away by how much I loved this dish. To our combined surprise and relief, the chicken was also served with hot, wet towels and a wedge of lemon to clean our sticky faces and hands after we finished devouring every last wing.

We were getting quite full, but the party wasn't over yet as they brought out our entrees. I got the Vietnamese “Po’ Boy”, a banh-mi toasted and stuffed with pâté de campagne, face bacon, truffle scented chicken liver parfait, pickled carrots and dressed with Kewpie (Q.P.) mayonnaise. Though I really loved all the elements described in the menu, there was one pungent and bitter flavor that I just couldn't place or quite jive with. It tasted fabulous at first bite, but that strangeness intruded as an aftertaste. Now that I think back, I believe it might have been the chicken liver parfait...liver and I have never really gotten along. Next time, I will ask for the sandwich again without the liver and see what happens...to each her own, right? 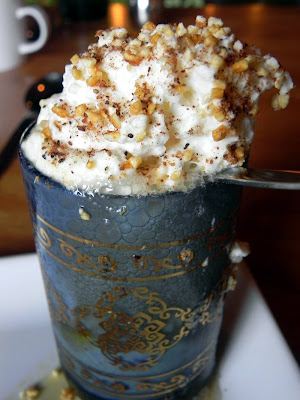 John chose the Potato Chip Encrusted Gulf Fish Sandwich with bread & butter pickles, bitter greens and dressed with sauce gribiche. Oh yes, another culinary term I had to look up. Sauce gribiche is a mayo-like, cold egg sauce made with hard boiled egg yolks and mustard. The flavor was wonderful and both of our sandwiches were served with a nice pile of tasty French fries and another toothpaste-like tube of their house made ketchup.

Understand that what I am about to tell you is not intended to criticize ROOT, after all, things like this happen all the time. It is their response to the situation that I would like to highlight. As it sometimes happens when eating fish, we just happened to find quite a few bones in John's sandwich. Our server had stopped by the table to ask how we were getting along and when we told him about the bones, his immediate response was to take John's plate, politely apologize and promptly offered to remedy the problem. Not only did they replace the sandwich with a fresh one (absolutely bone-free), but they refunded us the cost of the dish on our tab! I was amazed by the courtesy, professionalism and downright exemplary behavior which is unfortunately a rare occurrence in my experience. Bravo Root and Adam "Hulk Smash", our terrific server!

Though we got doggy bags for the remainder of our sandwiches because we were so very full, I wasn't about to walk out that door before tasting their dessert. John once again feigned indifference to my sweet tooth, so I chose the “ROOT Beer” Float with Black Apple Jack Soda and Caramel Apple Pecan Ice Cream in a ornate glass goblet, an apple strudel tart and a couple of ginger snaps rolled in Apple Jacks. It was a delightfully adult twist to a childhood favorite that John and I both loved, as was evident by a clean plate. I cannot wait to go back!

Hello, I read the first paragraphs of this post a couple of weeks ago, and immediately added Root to my list of places to go on my very short first visit to New Orleans. Well, I went last Friday for a long, indulgent solo lunch, and it was extraordinary!! Duck prosciutto with a "study" of seven kinds of pickles...chicken gizzard salad with hot mustard vinaigrette...smoked oysters/andouille spoonbread/manchego foam...sweet corn ice cream and sweet corn flan with crackerjack...it was all amazing! Thank you for steering me in their direction! --tom hudgens, author of The Commonsense Kitchen

Sorry the post was kind of long, but we ate a lot! I am so glad you enjoyed ROOT as much as I did! :) They are really fantastic!