In awe of Margaret... 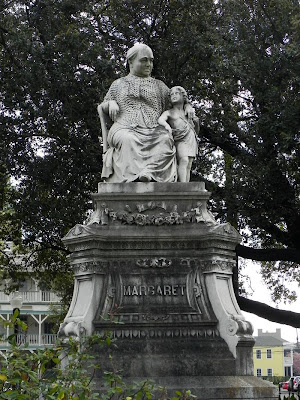 About a week before the madness of Mardi Gras set in, John and I took the streetcar downtown to check out used cars for sale at the Bridge House on Camp Street. We figured we could score a new vehicle and help out a worthy non-profit in one fell swoop, but unfortunately the only available choices that day were a couple of major gas guzzlers (a.k.a. Cadillacs) and a Cavalier beater with no A/C, almost 200K miles and the dirtiest interior I've ever had the pleasure to ride in.

We decided to come back at a later date when their inventory had changed and as we shambled, disheartened, back towards St. Charles, we walked through a little triangular park dubbed Margaret Place. In the center of the park's widest point between Camp and Prytania Streets sits a marble statue of a seated woman smiling down at a small, cherubic child and its only inscription the name "Margaret."  As I walked down the path away from the statue and toward Earhart Boulevard, I discovered a plaque where through murky glass I was barely able to discern that the statue was of a famous female philanthropist named Margaret Gaffney Haughery.

Completed in 1884, this statue is one of the very first in the U.S. erected in honor of a woman by sculptor Alexander Doyle.  Referred to as "Margaret of New Orleans", "The Bread-Giver" and "Angel of the Delta", Margaret Haughery was an awe-inspiring individual who rose up through obstacles like illiteracy, abject poverty and the death of her husband and only child to become a wealthy businesswoman who gave the majority of her earnings to feed, clothe and house the city's destitute. When the yellow fever epidemic raged through the city in the 1850's, Margaret cared for the sick and reassured dying mothers that their children would be looked after. You can read more about this amazing woman at KnowLA.org among other online sources.

When I stopped to admire the statue again after reading of her staggering accomplishments and selfless acts, my own financial difficulties seemed truly insignificant and narcissistic in comparison. Do people like her even exist anymore?
Written by Unknown
Email ThisBlogThis!Share to TwitterShare to FacebookShare to Pinterest

I'm sure they do exist. But the jaded world we are living in, the news about Charlie's breakdown, or Lindsey's jail time has become the headliners instead of the giving people who truely keep the idea of striving for greatness going..