Taking a ride on "A Streetcar Named Delicious" 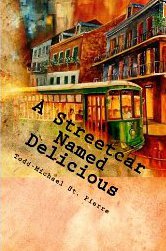 While reading the recipes in A Streetcar Named Delicious by Todd-Michael St. Pierre, I couldn't help but sense the author's whimsical, childlike nature from the titles of his recipes to the interspersed poetry about New Orleans. I suppose it makes sense considering that St. Pierre also writes children's books, but it made delving into this particular cookbook much more fun than I originally imagined.

I was scanning through, seeking to try out a couple of dishes for myself, and I couldn't help but smile at recipes for "Found My Thrill Char-Grilled Oysters", "Mon Mere's 7th Ward Gumbo", "Port of New Orleans Shrimp Apollo" and "Abundantly Blessed Spaghetti." Though the author himself calls his style "campy", I just think it's a warm, sincere and innocent way to reflect his love for New Orleans, something I can relate to wholeheartedly. 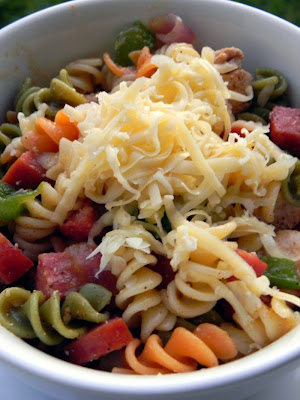 Whether the origins of these recipes came from Todd-Michael St. Pierre's family, friends or acquaintances, they all have the feel of tried-and-true, home-tested and approved classics from your Maw-Maw's kitchen. Some of the recipes actually seemed to be contributed by random, neighborhood folk like the "No-Hassle Pimm's Cup" offered by "a little old lady on Annunciation Street" or (my favorite) "Comus Caramelized Tomatoes" from "a bag lady who resembles Vivian Leigh!"

After much deliberation, I settled on two different recipes. One, "Tante Zizi's Jambalaya Pasta", was recommended to me by the author and the other, "Purgatory Pie", just sounded too scrumptious to pass up.

"Tante Zizi's Jambalaya Pasta" is wonderfully simple recipe that takes the basic necessities from any good jambalaya recipe -- chicken, tasso or smoked sausage and green bell pepper -- and brings them together in tasty harmony over multi-colored pasta. Two eye-opening ingredients that I never expected to see were the garnishes, grated provolone and gouda cheese. Though unexpected, the heavy-flavored cheeses added a different dimension to the pasta and worked perfectly. It made a large pot of pasta that John gobbled up greedily for lunch and dinner the following day! 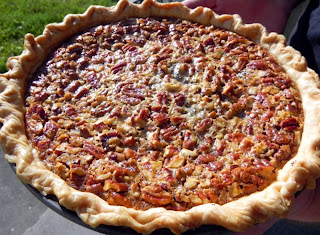 There were several desserts I wanted to try, not least of all the "Dreamy Chocolate Doberge Cake" (I pity the soul that's not tasted a decadent Doberge), but since I didn't have the tools to cut the many layers, I settled for the "Purgatory Pie".  Now, this is basically a pecan pie that I had made many, many times in the past, but it included a few unique ingredients like Louisiana cane syrup (I used Steen's) and fig preserves. Let me just tell you, this is a pecan pie to end all pecan pies. Delicious!

Although I really love the book, my only complaint would have to be the lack of photographs. Not only would I love to see pictures of all this scrumptious food, laid out like it's meant to be at your mom'an'dem's table, but I would love to see pictures of the family and friends who shared these wonderful recipes with the author like Tante Zizi, Aunt Celia or even the "real nice guy on Poetry Street."

Until then, I will just have to make the recipes and find out for myself!

"I love a fresh Muffuletta,
I love Lafitte and Laveau!
Sometimes a song just says it best...
What a Wonderful World, Satchmo!"

~ by Todd-Micheal St. Pierre, from "I Love New Orleans", A Streetcar Named Delicious

Ms Kimberly Ranjbar, Todd-Michael St. Pierre is everything you discribe him to be...I've know him for years on FaceBook & he is a very delightful friend to have. I also love his 'child-like' ways...he loves to write cookbooks containing New Orleans type recipes because he does miss his home-town so much & can hardly wait to be home again...he writes children books because he is still a child himself in many ways...the poetry he writes are of his childhood days living in New Orleans so he never forgets them & I'm very glad he does, he has made me remember things I've long forgotten when I lived there...he is truely "one-of-a-kind" & I'm proud to call him "my adopted son" by FB.

Thanks so much for showing your support. :) I can't wait to read more of his books and try more of his recipes too!