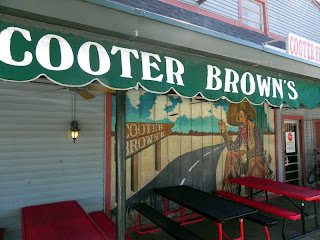 Since last Thursday, I had big plans about this week's cheat. Searching through my list of restaurants "to do", I had narrowed down my choices to three different contenders. All three restaurants were fairly upscale which required some personal maintenance on my part, that I was ready and willing for, especially since I was literally drooling after reading their online menus.

The day I'd been waiting for dawned warm and bright, the birds were singing, the flowers were blooming and the last thing I wanted to do was get dressed up. What can I say? "Even the best laid plans oft go astray..."  So, as it turned out, for my 78th cheat John and I went to Cooter Brown's. I lost another pound from the ones I gained a couple of weeks ago and am down to a total loss of 79 pounds. 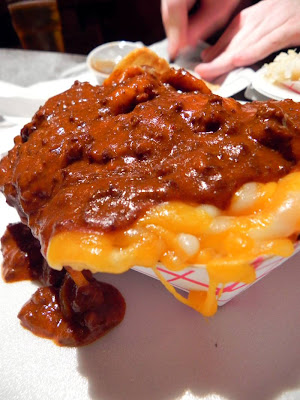 I pulled back my unwashed hair into a pony tail, slipped on my trusty Birkenstocks and we slowly ambled the "strenuous" five blocks to the bar. After a workout like that, I needed a nice cold beer, so we placed our food order and hit the bar to choose from one of the hundreds (yep, I mean hundreds!) of brews the bar has available. I started to get dizzy while reading from their selection, so I settled for one I knew I liked, Lazy Magnolia's Southern Pecan. John decided to go a little lighter considering our food order and selected a Ponchartrain Pilsner.

We made our way through the darkened bar to sit in one of the semi-private booths and waited for our food while we listened to the other patrons cheer a basketball game that was playing on several wide-screened TVs. Before we could take a few sips, our number popped up in glowing red numerals on the digital counters placed strategically under the television screens, signalling that our food was ready.
Though it didn't seem like a lot when we placed the order, when I saw the amount of food sitting on the counter I thought we might have gone a bit overboard. Right away, neither of us could help digging into the large order of chili-cheese fries, using forks to plow our way through a molten layer of cheddar and jack cheese topped with a "bean-in" chili, all resting on a bed of thickly-sliced waffle fries.  They were a greasy, spicy, salty mess of carbohydrates and fat...and they were absolutely delicious. 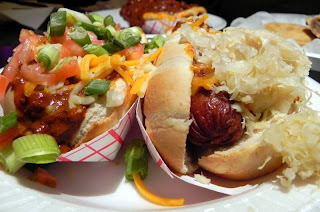 Our other "appetizer" was two Mrs. Wheat's Fabulous Meat Pies made right here in New Orleans. Now, I don't know about "fabulous", the dough was super thin and the filling uninspiring, but they were not terrible and the brown gravy dipping sauce served alongside helped boost the overall flavor. I could easily see devouring a few of these easily after having "one too many" though, and finding them utterly delicious.

Finally, my main course was a Creole Dog, a spicy link of andouille sausage covered in chili, cheese, fresh tomatoes and green onions served on a soft, simple hot dog bun. It was perfectly tasty and needed no other condiments, not that I could fit anything else inside that bun if I had wanted to. John chose the Cooter Dog, a beef frankfurter topped with chili, cheese and sauerkraut. 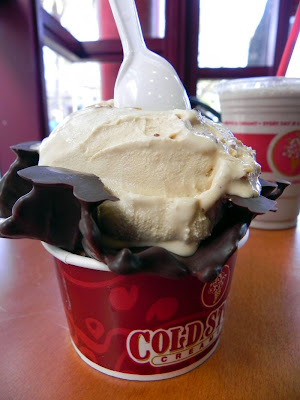 Fearing a serious case of heartburn, I thought it would be a good idea to grab a malt or shake at Camellia Grill just down the block. As we neared the white pillared restaurant, John began to whine about standing in line for an hour just to get dessert. After a few minutes of listening to him rant, I gave in and opted to get some ice cream at Cold Stone Creamery next door...and made him pay for it.

I got a large scoop of their "Coffee Lover's Only" combo of coffee ice cream, crumbled Heath bar, toasted almonds and caramel sauce served in a chocolate dipped waffle cone. As I walked out, choosing to enjoy my ice cream in the sun, I glanced over at Camellia Grill only to see that the line had completely disappeared. Though I enjoyed my treat, I had to grumble a bit at John for his impatience.  But I must admit, for a day of broken plans and grudgingly-given compromise, I had a wonderful time.
Written by Unknown
Email ThisBlogThis!Share to TwitterShare to FacebookShare to Pinterest

Hi Kim - Shalom's friend Rick here.
I just started a blog and copied in your latest post. The pictures make me hungry! My blog link is http://whoinspiresyou.posterous.com/
Hope you like it. I'm very open to suggestions from an ace blogger (you). Thanks,Rick

Kim, those hot dogs and chili cheese fries look so good! And the ice cream...YUMMY! Keep up the great blogging. =)

We found Cooter Brown's in October when we last visited NO. We were on the hunt for oysters, we made pigs ourselves. Luckily, I didn't know that there wass Coldstone down the block. I would never of made it back to the hotel. Everything looks awesome.

@Rick...AWESOME! I am sooo flattered!

@haute chocolate - Thanks! I love your blogs too :)