A taste of Paris in Uptown New Orleans: Tartine 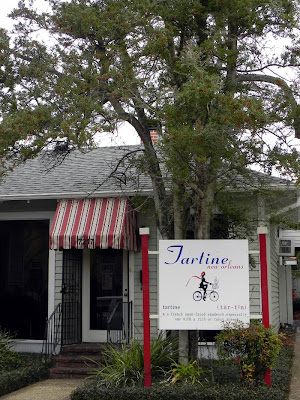 Many years ago, I spent one wonderful week in Paris and it is a trip I will never forget. From the crack of dawn to well past sunset, I dragged my poor mother all over the city to witness every inch possible before returning home. We practically ran through two wings of the Louvre and the entire, impressionist vault at the Musée d'Orsay in one day. A visit to Versailles, an unofficial tour of part of the Sorbonne and dinner on the Seine near the "other" Statue of Liberty filled another. Strangely enough, though most of the trip remains indelibly etched in my memory, I don't recall anything in particular that I ate aside from a fabulous, seven-course luncheon at my friend's house in Auvers-sur-Oise. Oh! I also remember the bread.

Every morning during the weekdays, a huge farmers market would appear on the street in front of our hotel. Since we didn't really have time for breakfast or lunch during our insane, see-the-city-in-seven-days schedule, we would often pick up a couple of  baguettes from one of the vendors and munch bleary-eyed while we waited on the Metro trains to take us to our next destination. 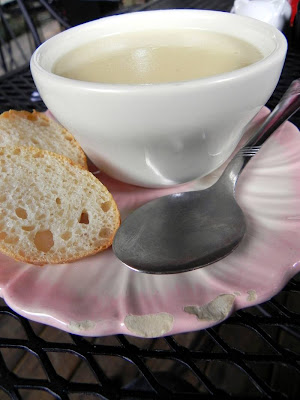 When I heard about the opening of Tartine on Perrier Street, the first thing that came to my mind was a fervent wish for another taste of those chewy, incredible baguettes...I was not disappointed. A few days ago, Casey, John and I visited Tartine for my 70th cheat. I am still holding steady at a loss of 78 pounds.
The clean, cozy house-turned-bakery was bustling with customers when we arrived, though it was rather late in the lunch hour. The restaurant was so full that, after placing our orders at the counter, we had to choose a table outside on the cute, little wooden patio. Thankfully, it wasn't too cold to enjoy our lunch alfresco.
Casey and I both ordered a cup of Potato-Leek, the soup of the day and we were served by the talented chef/owner herself, Cara Benson. The smooth, almost perfectly white soup came out steaming hot with a few small rounds of sliced baguette on the side. Now, I make potato soup at home quite often, but it has never resulted in what I experienced at Tartine. 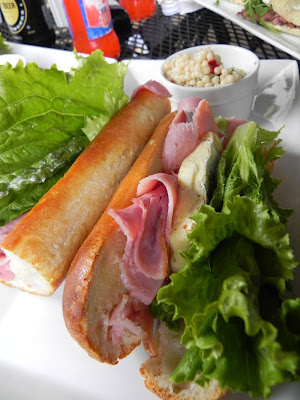 It was a perfect vichyssoise (a fancy name for potato-leek soup) with a thick, silken texture and a rich onion flavor and a yogurt-tartness at the end. Casey and I "mmmed" at the soup so much, that John finally broke down and asked for a taste. I didn't want to share, but Casey, wanting to save room for her sandwich, gave John the rest of her cup. My only regret was gobbling the delicious, chewy rounds of bread too soon! I didn't have any left to wipe the remnants from my bowl.
As I was considering using my finger to wipe clean my cup, our sandwiches arrived. I ordered the ham sandwich that included thick slices of brie cheese and large, uncut leaves of butter lettuce stuffed lengthwise into a long, thin baguette and slathered with a sweet, fig mustard. The balance of the salty ham and sweet mustard together put me on a cloud and with the added bonus of the freshly baked baguette...I could have sworn I was back in Paris.
John chose the Tuna Nicoise sandwich featuring a tuna-sardine mixture, a boiled egg, butter lettuce and a tomato aioli layered beautifully between two light, almost fluffy slices of brioche. Casey selected the steak sandwich with thickly slices of beef cooked rare covered with a crumbly, blue cheese butter and arugula lettuce on toasted ciabatta bread. I got to taste both sandwiches (lucky girl that I am) and they were both wonderful! My only wish would be that the tuna be seared and sliced as opposed to the crumbled, salad-like mix that was served, though I imagine in a busy shop like Tartine, the latter is a lot simpler to prepare. 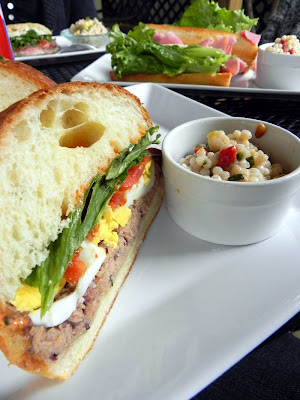 All of the plates also featured a small ramekin of salad made from fregula, a small, ball-shaped pasta (if I am guessing correctly) that I thought was colorful and light, a pleasant accompaniment to some incredible sandwiches.
I couldn't leave without sampling some dessert, there was no way I was going to pass up some of her luscious pastry, and I chose a thick, frosted brownie with chopped walnuts. We shared around the appropriately chocolaty and nicely gooey brownie with relish. When talking to my friend Lorin a few hours later, she chided me for not trying "the tartine" assembled with the chef's own house-made pate, onion confit and Dijon mustard on a baguette. Well, you know what they say, there's always next time!
Written by Unknown
Email ThisBlogThis!Share to TwitterShare to FacebookShare to Pinterest

How do you pronounce the name?