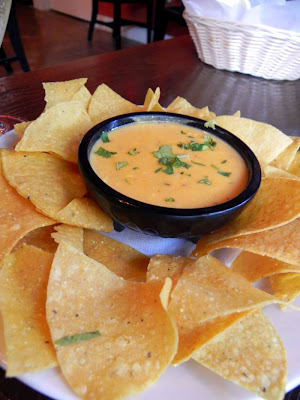 The spicy lure of Mexican food had been swirling through my brain all week long, so it was no surprise when I decided to visit a new spot downtown in the Warehouse District, Tomasito's Mexican Cuisine. They have only been open a few months, but I was sure that would be plenty of time to work out any kinks with such a simple, straight-forward menu I'd already browsed online.

This is my 64th cheat and I am standing still at a loss of 77 pounds. In case you were wondering, I've been keeping up with my new pilates regime...but other than noticing a slightly flatter tummy along with increasing irritation at Mari Winsor's unshakable cheer, the pounds have stopped coming off.  Yes, I am frustrated and annoyed, but I have been through setbacks like this before and I am still determined to trudge on.

After fighting with a parking meter that wouldn't accept either of our cards, we salvaged enough change from the floor of the car to allow us a one hour lunch slot at Tomasito's, a new Mexican restaurant on the corner of Tchoupitoulas and Julia Streets. We arrived at an off-hour (almost 2:00 p.m.), so it was not a shock to see only one other diner in the darkened restaurant. Dark, heavy wooden tables and chairs were nicely spaced around the terracotta-colored room accented with several sombreros on the wall among other "Mexican" decor. 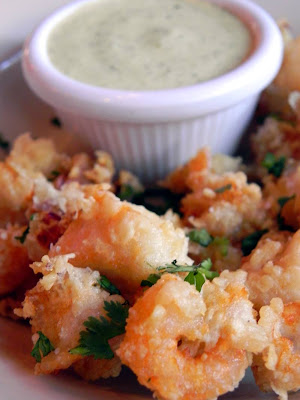 You simply can't eat fresh, salted tortilla chips and salsa (which were immediately brought to the table) without a drink, so I ordered their "Senorita" special, a blended Pomegranate Margarita for only $2 while John opted for the regular concoction over ice. Both drinks were tasty, I loved the fresh lime juice in John's, but were sadly lacking in punch. Perhaps I have become too accustomed to the wicked bombs they serve at Superior Grill Uptown or Lucy's just down the street.

We began our fiesta lunch with two appetizers, the Spicy Queso Dip and Yucatan-Style Fried Seafood. Sadly, both were a disappointment. The queso was grainy in texture and despite the menu's description of "authentic Mexican cheeses," it tasted like smoked Gouda or cheddar was added to the mix. We barely touched it.

The fried seafood dish was to include "adobo-dusted" calamari, shrimp and fresh fish with a jalapeno-cilantro mayonnaise. Although I enjoyed the batter and the dipping sauce, the calamari came out chewy and overcooked, plus there were only two pieces of tiny salad shrimp. To add insult to injury, the catfish was awfully muddy and pretty much inedible. 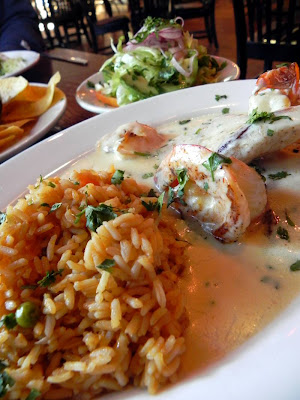 Sipping our drinks, we grinned at one another and hoped for an improvement in our entrees. We shooed the other dishes from the table as they arrived, John's Steak Burrito and my "Huachinago a la Plancha," a seared redfish filet and shrimp served in a lemon-butter sauce. Both dishes also featured Mexican rice, although John's was located inside his burrito along with some refried beans. We both agreed that the steak was delicious, although there wasn't a whole lot to be found.

I really enjoyed my whole dish, the sauce was buttery and rich...just like New Orleanians like to do it and the redfish was perfectly cooked. I was also happy to see large, butterflied shrimp on my plate as I almost feared the "pinkies" from my appetizer. My dish also included a side salad of shredded lettuce and huge chunks of fresh avocado piled on top of thick slices of juicy tomato.

At last, it was time for my favorite part of the meal...dessert. On the server's recommendation, we chose the Tres Leches Cake, an opulent treat I've enjoyed at many Latin restaurants around town (Rio Mar's version being my favorite).

The dish that came out looked dreamy and when I took a bite, the warm flavors of cinnamon and sweet milk were all present and accounted for, but the mushy texture of the cake brought my overall enjoyment down several pegs. Since I was expecting the springy feel of sponge cake, all its lovely pores filled with three kinds of milk, the dense cake we actually received was not my preferred conduit for all that creamy goodness.

Perhaps I should give them more time and come back again in a few months?
Written by Unknown
Email ThisBlogThis!Share to TwitterShare to FacebookShare to Pinterest

You are just spoiled with all the yummy Mexican food in California!! La Cumbre baby!

I know, I was spoiled! Ohhhh La Cumbre ;)