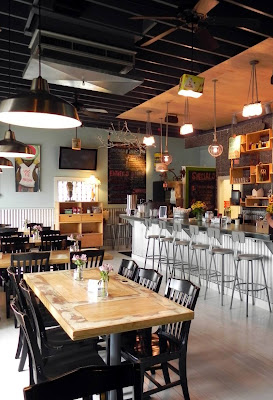 No, I'm not talking about Blue Oyster Cult, Christopher Walken or Saturday Night Live...I'm talking about Cowbell, the newest restaurant to hit the ever-growing dining community on Oak Street. Yesterday, John and I joined our friend Lorin and her son Remy for lunch at Chef Brack May's latest creation in the old Station 8801 building lying smack up against the train tracks. Though I gained a pound (gotta love the holidays!), there was no way I was going to miss my 66th cheat at Cowbell.

At just about noon, John and I left our apartment and walked the four short blocks down Oak Street to the newest burger joint in town. Only a few days before, we'd been returning home on River Road from a trip to Harahan when we noticed that the 8801 place had re-opened and I couldn't wait to try it.

After greetings and hugs, we all walked inside to a brightly-lit, clean interior with accents of corrugated tin, whitewashed doors serving as the tops of long tables and old mixer attachments transformed into light fixtures.  We chose a table near the back next to a sun-filled window and sat down to browse the menu and place our order. 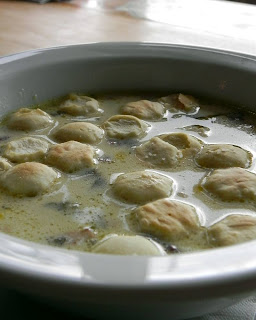 It wasn't long before dishes began to arrive, the first being Lolo's Chili Cheese Fries and a bowl of Quahog Clam Chowder. The hand-cut fries were wonderfully crispy and topped with a delicious combination of well-seasoned chili made from organic beef and gooey, melted cheese. We easily could have polished off two orders considering how quickly it disappeared!

When I first saw the clam chowder on the menu, I knew I had to have it, seeing as I'm a huge fan and haven't had a bowl since leaving the Bay Area. Though I am accustomed to chowders that are super thick and creamy, I have to admit I loved Cowbell's interpretation. The broth, while not as creamy, was still rich and buttery, heavy with the flavor of chopped clam meat and bacon. The chowder reminded me of home while still retaining that New Orleans flair and it still disappeared almost as quickly as the fries...almost. 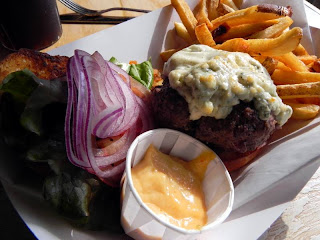 While slurping up the last drops, our entrees arrived. Remy, John and I all selected burgers and Lorin chose the Fish Tacos. Remy and John both got the Zinfandel, bacon and onion compote topping and John added blue cheese. I couldn't resist having the Applewood Smoked bacon and farm egg on mine... drooling as I broke the yolk and watched it ooze down the side of my perfectly medium-cooked burger.

All three of us were oohhing and aahhing over these wonderfully perfect creations (moaning with our mouth's full might be more accurate), the grass-fed beef so lean and tasty on a firm potato bun that held up to the juiciness and extra "Agogo" sauce heavy with mayo and horseradish. Lorin said she enjoyed her tacos, which were light and fresh tasting, but I didn't have a bite myself being so enamored and involved with my burger. 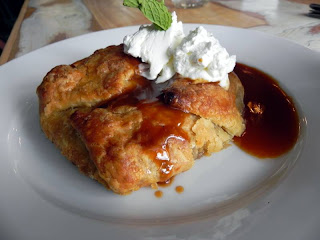 While wondering if I should use my last remaining fries to soak up some yolk that escaped, we all decided to order both available desserts; Chocolate City and Apple Pie. The Chocolate City was basically a flourless chocolate cake that was incredibly dense, creamy and rich, topped with a bright dollop of fresh whipped cream. The pie was actually more like a country tart with cinnamon and sugar spiced apples wrapped and baked in a buttery crust. Now, I know I am usually all about chocolate, but I have to say this time the winner was definitely the apple pie. But don't get me wrong, both were fantastic!

After a fabulous, yet simple meal like that, I'd say the world needs more Cowbell, but I prefer it remain in my neighborhood.
Written by Unknown
Email ThisBlogThis!Share to TwitterShare to FacebookShare to Pinterest

Went today (12/23) for lunch. Had the chowder and fish tacos (he uses amberjack, which is far more steaky than the typcal tilapia)

I now have a new favorite place for lunch.n Outstanding!