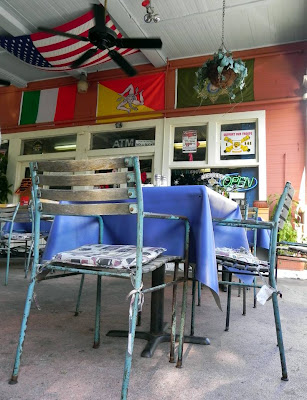 As a fat girl, I have a tendency to seek clothing and environments that make me comfortable. Although dining at a fine restaurant is always a flavor-rich thrill and pleasure beyond measurement, most of the time I enjoy eateries that are low-key with an easy-going staff and modest menu. Considering the upcoming holiday parties and dinners, it was a relief to go to one of my favorite nearby spots, Café Freret.

As you all might have noticed, my weight seems to be bouncing up and down a lot lately, but not making any definite progress. It seems I have either A) hit a plateau or B) need to get off my ass and start exercising. I hate to admit it, but I am pretty sure answer B is correct. I've decided to begin a 20 minute Pilates workout three times a week. I know that doesn't seem like a lot, but considering I was doing absolutely nothing up until this point, I think it'll be a great start. I most certainly am not going to give up my cheats... 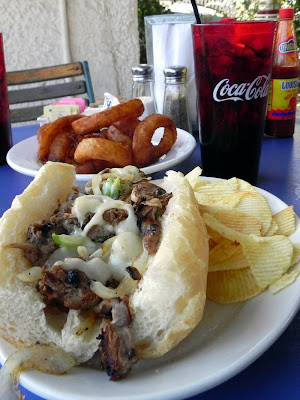 Located on the corner of Lowerline and Freret Streets (surprise, surprise), this Uptown, service station turned cafe is a great, inexpensive place to get your grub-on as many frequenting Tulane students will tell you. On a nice day, you can sit outside on the generous patio along with your favorite, four-legged friend to enjoy a leisurely meal, or cram session, while watching the "Freret-Jet" traffic roll by. By the way, you can order special treats for your canine companion, too!

John and I selected a spot as far away from a table filled with budding lawyers as possible and before long, placed our order with a friendly waitress that has been serving at Café Freret for at least five years now. Sipping our sodas, it wasn't long before our dishes arrived and we fell to without hesitation.

John's Cuban Po-Boy with thinly sliced roast pork and ham with sautéed mushrooms pressed together on Leidenheimer's French bread was indisputably delicious, but I think we agreed that mine was even better. 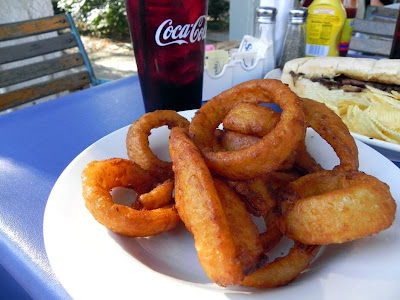 Since I had been craving steak all week long, the New Orleans Steakbomb totally hit the spot with tender flank steak shaved nice and thin draped in melted Swiss cheese and topped with sautéed onions, mushrooms and bell peppers. I easily gobbled this Crescent City version of a Philly Cheesesteak, which was also served on toasted French bread, in no time flat. Both sandwiches were served with potato chips, but I had to have some of their crispy, greasy onion rings on the side. We got a large plate of rings, but had no difficulty devouring the entire order.

As expected, I couldn't leave without some dessert and opted for a heated slice of Pecan Pie. Although I have had nothing but tasty dishes as Café Freret, this dish was my first disappointment. Even though the filling was tasty and sweet, there were hardly any pecans and I suspected a pre-fab culprit. Our waitress admitted that the pie came from Sysco...you'd think a big food corporation could get something like pecan pie down right! I highly suggest that instead of the pie, you order one of their house-made desserts that change on a weekly basis, or perhaps their bread pudding. Either way, I'm positive it'll be wonderful and totally satisfying.
Written by Unknown
Email ThisBlogThis!Share to TwitterShare to FacebookShare to Pinterest

Depends on what level they bought. Sysco offers a number. If the restaurant went cheap they got what they bought cheap.

The onion rings look kinda pre-fab, too. But their breakfasts aren't bad....

The onion rings did look like pre-fab, but they were tasty and full pieces of onion pulled out from each bite...so not bad.

I like their breakfasts too and I really dig the servers...super friendly and they remember your face :)