A novel classic: The Mexicali Rose 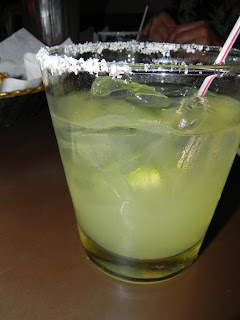 On 7th and Clay in Oakland, California lives what is touted as the oldest Mexican restaurant in the Bay Area, the Mexicali Rose. Open since 1927, this classic restaurant was completely unknown to me until just this past weekend. During the 33 years that I lived in the Bay Area, I had become familiar with many of the cities, from San Francisco to San Jose and there were very few towns that I had not explored. Oakland just happens to be one of them. I can't tell you how cool it was to visit my friend Shalom in a Bay Area city where I felt like a newbie as opposed to an old hack.

In New Orleans, Shalom and I used to go out for a huge breakfast at 5 am after a hard night of drinking and it seemed to me that Mexicali Rose is the Mexican equivilant of St. Charles Tavern.  The food may not be spectacular but there was a lot of it for a great price in a comfortable atmosphere.

We pulled into the small parking lot outside the Mexicali Rose at around 7:30 p.m. on a Saturday night.  The restaurant was full of diners crammed into red leather booths with wood-flavored Formica tables, a stark reminder of late 60's and early 70's decor.  I couldn't help grinning at the walls featuring large murals of Incan-like art (also very 70's) as we slid into a large circular booth in the corner...the only one that would hold a party of five and reserved, as it seemed, just for us.

We were immediately served tortilla chips and a searing hot salsa. Someone requested a pitcher of margaritas as we browsed the menu.  From their a la carte options, I selected the Chicken Enchilada with Chile Verde sauce while my friends ordered Pork Burritos, combination plates of Chicken Enchiladas and fresh Tacos. We also put in an order of guacamole, a must-try according to my friends. I have to admit, I was a bit fuzzy on the other orders since my friends had showered me with libations before we even arrived at the restaurant. 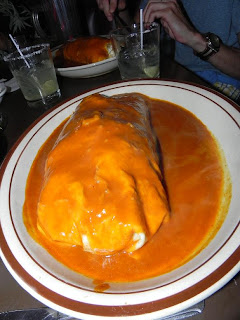 Along with more tortilla chips, a huge pile of guacamole topped with grated jack cheese was brought to the table and no one hesitated before grabbing a chip and digging in.  It proved to be fairly tasty and chunky with avocados.

My eyes popped when I saw my friends' entrees arrive. The burritos were easily as big as my head! At only $8 a plate, Shalom and Scottie's entrees could easily provide them with sustenance for several days.The burritos were tasty too, loaded with chunks of moist pork, lots of melted jack cheese, rice and refried beans. My enchilada was a much more manageable size, not to mention slathered with a tasty chile verde sauce that was tangy and plentiful, which I preferred over the red sauce on Shalom's burrito.

Although we couldn't help but giggle a bit at the "classic" atmosphere and our handwritten "reserved" sign posted on binder paper, the Mexicali Rose is, nonetheless, a great spot for affordable Mexican food in Oakland...especially late night. We ordered another round of margaritas (heavy on the salt!) and discussed where to head next. The night had only barely begun...
Written by Unknown
Email ThisBlogThis!Share to TwitterShare to FacebookShare to Pinterest