An affordable cheat at Cafe Rani 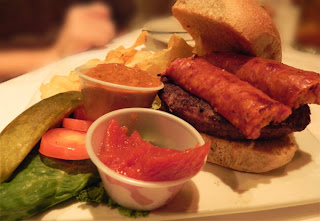 Due to my current financial situation, selecting cheat meal locations that are also affordable can truly be an onerous task.  The spoiled foodie in me can't help wanting nothing but the best (what I wouldn't give to dine at Lilette, Gautreau's or La Petite Grocery!), but any eateries with an average entree price over $15 is, sadly, out of my monetary reach.  Last week I had selected a small restaurant close to my house offering cuisine that had piqued my interest.  Unfortunately, when John and I were standing outside of said restaurant looking at the menu posted by the front door, we felt a bit squeamish when we noticed that there wasn't even one entree under $20.  Needless to say we were forced to change our plans.
After driving aimlessly down Magazine Street for a while just hoping to spot an interesting, yet affordable location to dine, I spotted the elusive sign for Cafe Rani. In a previous attempt to visit the cafe, I had so much difficulty locating it, I simply gave up.  It seemed somehow a twist of fate that its location was revealed to me and I chose not to fight the cards as they were dealt.  This is my 39th cheat and since I lost two of the pounds I gained last week, I am back to a grand total loss of 60 pounds. 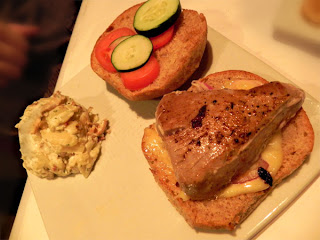 Cafe Rani is tucked into the back of a large courtyard on Magazine located right across the street from Belladonna Day Spa.  When we entered the cafe, we were able to select our own table and chose a spot in the back for privacy.  The decor is relatively modern and clean with framed black & white photos of New Orleans spaced evenly along the walls, simple wood chairs and linen covered tables.  I couldn't help noticing that several of the photographs weren't mounted properly in their frames and were slipping down into obscurity.

Pushing the minor irritant aside, I scanned the large menu that featured mostly salads for something naughty to eat.  I realize that Cafe Rani emphasizes healthy cuisine (thus the proliferation of salad entrees), but I was here to cheat, so I selected the heaviest items I could find on the menu.

We started with a Shrimp & Crawfish Bruschetta.  There were rosemary ciabatta "croutons" or triangles topped with shrimp, crawfish, artichoke hearts and tomatoes sauteed in a lobster butter.  Although the dish didn't look very pretty (or it could have simply been a lighting issue), it was quite tasty and even possessed a bit of a kick with some added red pepper flakes.  It was a tad greasy, but hey...who was complaining? 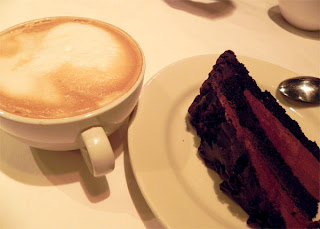 Shortly after we gobbled down the appetizer, our entrees arrived.  John ordered the Tandoori Tuna Steak sandwich served on a wheat bun dressed with mango aioli, sliced cucumbers and tomatoes. From a choice of sides, John selected their potato salad to go with it. Although I loved the curry flavor of the tuna balanced against the sweetness of the wheat bun, the tuna wasn't cooked quite right.  John had requested the tuna be very rare (like any good tuna steak should be) and simply seared on the outside.  Whoever prepared it must have not had the grill/pan hot enough because the tuna had just barely turned white on the outside.  All in all though, the dish was tasty and the bacon enhanced potato salad was the star on his plate.

On their website, Cafe Rani touts "one of the best burgers in town" so naturally, I ordered a burger, but not just any burger.  I selected the Creole burger topped with andouille sausage and served with a house Remoulade and cocktail sauce on a wheat bun.  The Remoulade was delicious but spicier than I am used to and I liked the wheat bun and sausage, but the burger itself was rather dry (I requested it to be cooked medium) and there wasn't any real flavor in the meat itself.  It was served with regular Zapp's potato chips sprinkled with Tony's.

I couldn't leave the restaurant without ordering dessert (naturally), so I selected the Double Chocolate Fudge Cake and we also ordered a couple of lattes on a tip from our friend Lorin Gaudin. Apparently, Cafe Rani gets their coffee from The Coast Roast, a Mississippi roaster who has their own retail store front in Long Beach.  The lattes were aromatic and creamy, just incredible and as good as any California roaster I've ever encountered.  The cake was rich and decadent with a moist crumb and a thick vein of chocolate fudge (almost the consistency of a ganache) that we inhaled with ease.

Best of all, we were very pleased when we received the check and noticed that it wouldn't break the bank. Hurrah for a delicious, yet affordable cheat!
Written by Unknown
Email ThisBlogThis!Share to TwitterShare to FacebookShare to Pinterest