A ladies' lunch at Pho Saigon 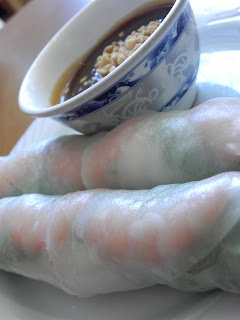 It seems that more than allergies, large hips and early onset gray hair runs in my family, there's also the love of pho!  Just the other day, my sister suggested lunch at a small Vietnamese restaurant in Foster City called Pho Saigon and much to my surprise, my mother and niece were equally excited to go! Well, my brother Bijan wanted to go too, but he was working in the South Bay that afternoon.

Anyhow, three generations of Ranjbar women traveled to our old family business location to enjoy some delicious pho for a light lunch.  You see, my father opened the first video store in Foster City over 25 years ago and "Foster City Video" only recently closed, but not before Pho Saigon opened next door.

Located in a fairly new strip mall, Pho Saigon is a clean, well-lit and well-decorated establishment with a welcoming staff and comfortable tables.  Almost before our butts hit the chairs, our server came to our table with ice water and menus.  Everyone else already knew what they wanted, but I was busy searching the menu for their won-ton soup.  I just had to try it as I wanted to compare their version to my favorite, Pho Tau Bay in Gretna. 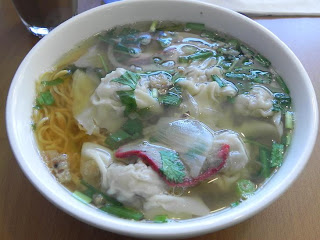 We placed our order and like quicksilver, our dishes poured out of the kitchen.  First to arrive were the shrimp spring rolls that proved to be fresh and wonderfully herbal with lots of basil rolled with large pieces of shrimp.  We all dipped liberally into the peanut sauce that was plentiful and delicious, although it seems my niece Arissa was not yet willing to give it a try.  I will give her time...after all, she already loves Vietnamese noodles at only 4-years-old!

Our entrees arrived and my mom proceeded split her pork and shrimp vermicelli bowl with Arissa while my sister (Mina) and I prepared our steaming hot soups. Mina went straight for the fresh basil and lime, quickly adding them to her soup like a seasoned pho professional while I reached for the spicy Sriracha and sweet Hoisin sauces.  The pork in my mother's vermicelli bowl was tangy and tender, really quite tasty with a little extra sweetness from the sauce.  Both she and Arissa had no difficulty finishing their meals and still found themselves quite satisfied. 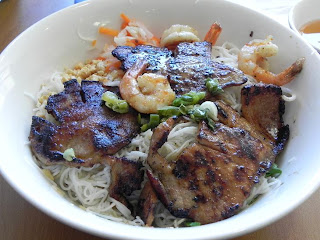 My large bowl of won-ton soup was nice...I was hoping for a more prounounced broth, something deeper and richer in flavor, but it was still good and quite filling with large won tons and a ton of egg noodles. I guess I am setting myself up for disappointment by comparing every won-ton soup I try to Pho Tau Bay, but it only makes me realize even more how much I belong in the Crescent City.

In any event, it was a nice, leisurely lunch with the ladies that I wouldn't have traded for the world.  There is simply nothing like visiting with my family and being a cool aunt.  I can't wait for the day when my niece is old enough to come and hang out with me in New Orleans...that's when she'll really discover how cool Auntie Kim can be!
Written by Unknown
Email ThisBlogThis!Share to TwitterShare to FacebookShare to Pinterest