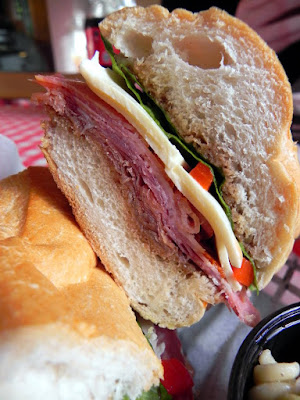 Although during hot, summer days like today I tend to hide in the air-conditioned comfort of my apartment, I can't help but hanker for something to eat that unfortunately, does not reside in my fridge. Since well past the lunch hour, I've been craving a good deli sandwich and the closest option in my neck of the woods is the Carrollton neighborhood newcomer dubbed CIBO.

This quaint, Italian-style deli opened up not too long ago in a space that has seen a long train of fairly unsuccessful ventures. For a long time, this little house-turned-restaurant on Carrollton Avenue was the home of Maurice French Pastries, but after they moved out, nothing has really stuck, until now (I hope).

John and I first visited CIBO way back in February, not long after it first opened. Though I am a po-boy fan through and through, I sometimes miss a well-made deli sandwich and for a long time, it seemed like the only worthy option was Stein's Deli in the LGD, which can be a bit of a trek. So I was pretty excited to try CIBO, if only for a nearby source for quality cold cuts.

We opted to sit at one of the few tables inside, even though they have lots of tables out front if you're looking to lunch al fresco. After much deliberation, we placed our order at the counter and sat down to await our sandwiches.

John chose the "Imports Combo" with  prosciutto, sopressata, capocolla, fresh mozzarella, roasted red peppers, balsamic and extra virgin olive oil on Italian bread. This, my friends, was a magnificent sandwich with a beautiful balance between sweet, salty and tangy that really set my taste buds in a whirl. My only complaint? I would have loved more ... more delicate deli meat, more cheese, more red peppers ... especially for an $11 hoagie. Am I a little piggy? Perhaps, but I still maintain that twice the ingredients would have made the sandwich far more satiating than it was. 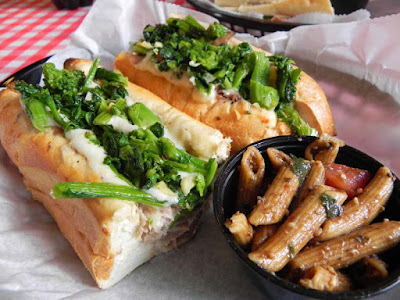 I chose the Slow-Roasted Italian Pork Sandwich with caciocavallo cheese fondue and sauteed broccoli rabe served atop an Italian sub roll (of course). John was a bit jealous because my sandwich certainly had a lot more heft to it and it was both delicious and satisfying. Both sandwiches also came with a small cup of pasta salad, which while tasty, was nothing to write home (or a blog) about.

Since that day, we've been back to CIBO many times and the food is consistent every time we go. I've also purchased some Italian bread and a pound of good mortadella from CIBO to make my own sandwiches at home. Another point of awesomeness would have to be their "filled-to-order" cannoli which, I'm pleased to say, give the ones at Angelo Brocato's a serious run for their money. I might even go so far as to say they're superior, but I fear repercussion from Brocato's diehards.

Anyone want to join me for a late lunch?