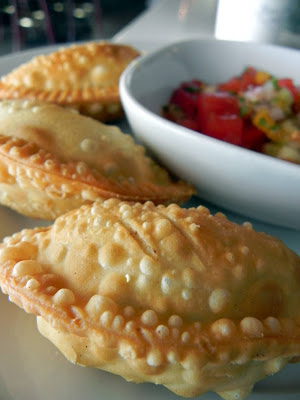 A few weeks ago, Anne and I were seeking a restaurant, both of us hungry enough to eat a bear. Instead, we opted to lunch at Wayfare. Stomachs rumbling, we headed over to the city's most recent addition in sandwich shops on Freret Street.

Standing at the counter, we drooled over the paper menus until we had decided, placed our orders and then sought out a table where we could try and relax till our food was ready. It was tough not to gape at the food coming out for other tables, but we managed to stay civilized and wipe the ravenous, envious look from our faces.

What seemed like hours later, though it was only mere minutes, our appetizer arrived. Anne and I agreed on the Jamaican Beef Meat Pies that were served with a bowl of mango salsa. The crusts were flaky and the interior was juicy and delicious with flavors minding me of earthy Indian curries. We literally inhaled them along with the salsa that added a bright, fresh flavor to the heady spices. Naturally, there were only three meat pies, more proof of my theory about the evil plot of restaurant owners and chefs to induce diners to order more than just one appetizer...there is NEVER an even number. 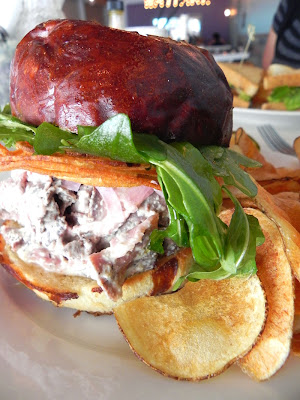 Feeling a bit more human and less animal, Anne and I were finally able to carry on a coherent conversation without our bellies gnawing out our backs. We felt quite a bit calmer when our sandwiches and sides arrived only a short time later. Anne chose the "BL(fg)T" with Kurobuta bacon, fried green tomatoes, lettuce, red onion, spicy mayonnaise and the restaurants own sweet potato hot sauce on toasted 7 grain bread. Although I was excited about the sandwich, I was kind of disappointed when I finally took a bite. Don't get me wrong, it was still tasty, but I think the spiciness detracted from the balance of flavor a proper BLT can offer. Additionally, adding a fresh tomato instead of fried took away the magic found when an acidic tomato meets salty bacon and creamy mayo. Perhaps I am just a purist at heart...

I chose the "Knuckle" which featured cold roast beef and pickled red onion thoroughly mixed with horseradish aioli, topped with shoe-string potato crisps and fresh arugula, and served on a pretzel bun. I do usually prefer my roast beef to be rare, but I still found this sandwich quite delicious. Anne and I agreed heartily that it was the better of the two and would gladly order it again. Both of our sandwiches came with a large pile of house made potato chips that were thick and crispy, not to mention gobbled heartily. 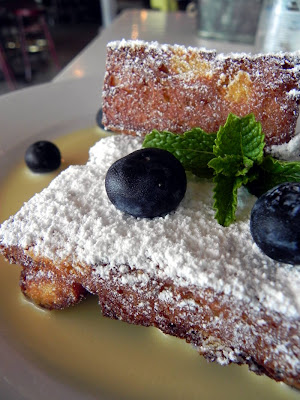 Because we were starving when we placed the order, our eyes might have been a bit larger than our stomachs, but there were no regrets on our additional sides. Anne got the Wayfare Oyster Dressing that came out like a dark, savory muffin. I only had a bite or two, but I found the dressing quite good even though I didn't get an oyster in any bite. I chose the Kurobuta Mac & Cheese and found it creamy, indulgent and decadent, though I wouldn't have minded tasting a bit more bacon.

Yes, we were full but the dessert menu was calling. It was a toss up, but in the end the Bread Pudding Beignets with rum crème anglaise and blueberries won out. Instead of the custard gooeyness of your average bread pudding, these were uniform rectangles of bread that were crispy on the outside and fluffy on the inside and I found the dessert to be rather fresh tasting and not as heavy as we anticipated, which was probably for the best.