It's time to meet Margaret 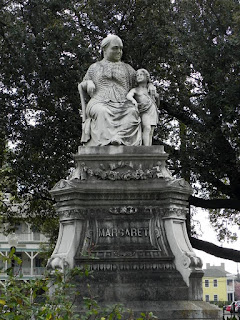 Over a year ago, I posted about a statue we found between Camp & Prytania when John and I made an unsuccessful attempt to buy a used car. The statue depicts Margaret Haughery, a great New Orleans philanthropist who dedicated her life to helping the poor, especially the lives of orphans. This sculpture, created by artist Alexander Doyle in 1884, was the first dedicated to a woman in the U.S.

Well, it seems that a local organization called The Monumental Task Committee is hosting a Margaret Haughery Meet & Greet fundraiser at the Margaret Gardens Inn on Sunday, August 19th where all proceeds go directly into the cleaning and restoration of the "Margaret" monument. The Irish House, Vega Tapas Cafe, and Rouses are among the many supporters who will be offering delicious food and drink for the event. Most importantly, attendees will get the opportunity to learn more about amazing Miss Margaret, "The Bread Woman of New Orleans," and how an Irish immigrant whose own familial loss inspired her to adopt a city.
Written by Unknown
Email ThisBlogThis!Share to TwitterShare to FacebookShare to Pinterest