House of the week: Cottage on Telemachus 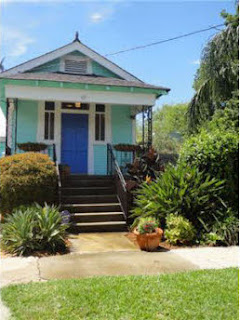 Being a fan of Greek mythology, I love that a lot of the street names in New Orleans are gods, muses, heroes and titans. For example, this week's house is on Telemachus Street. Telemachus is the character we follow in the first four chapters of Homer's Odyssey. Telemachus is searching for his father Odysseus who's been gone since he left for Troy when Telemachus was just an infant. Searching...isn't that exactly what I'm doing?

Although I didn't find any Greek gods along the way, I did find this adorable, renovated cottage in Mid City.  The facade of the house doesn't give any clue to how awesome it is on the inside. There are bamboo floors, cool Craftsman-like architectural details, two bedrooms and two bathrooms, and a huge deck with a lushly landscaped backyard. Plus, the house is located right between two very cool bars, 12 Mile Limit and Finn McCool's Irish Pub, not to mention only a couple blocks from Mona's on Banks and only three blocks from Canal Street (streetcar & parade route).  Heck, it's even in walking distance of my chiropractor!

Seems like a steal listed at only $199,000...
Written by Unknown
Email ThisBlogThis!Share to TwitterShare to FacebookShare to Pinterest

As a Mid-City homeowner, I can tell you that living in this neighborhood is the absolute BEST!