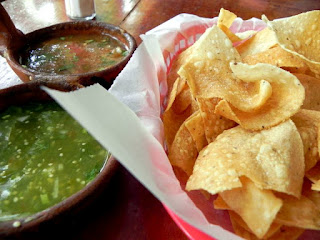 Perhaps it might seem odd, but when the weather starts getting warmer and daylight stretches into the evening, an itch comes over me that cries out for tangy guacamole scooped up by warm, crispy tortilla chips and an icy margarita made with fresh lime, the glass supporting a thick rim of salt. I swear, in the months between April and August, I make Mexican food almost exclusively at home; Fajitas, enchiladas, taco salad, quesadillas...even huevos rancheros! The cool, fresh vegetables, spicy meat and seafood are literally synonymous with warm weather in my eyes. So even though we've seen a deluge of rain in the past week, the times in between were bright with sunshine and muggy warmth and that's when we visited Panchita's. 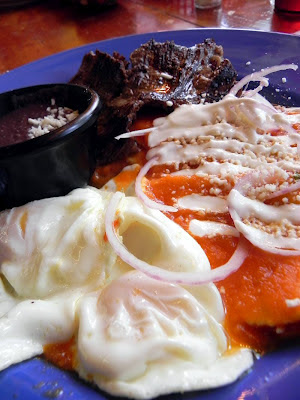 Since it opened a few years back, I've been to Panchita's many, many times. The eye-popping pink restaurant on Carrollton Avenue is not only close to my house, but their food is also quite tasty and affordable. It's become a popular spot in the neighborhood, even considering the competition that surrounds it. But then again, it is also the only authentic Mexican joint in the area, not to mention one of the very few in the entire city.

My friend Dani and her daughter Posie joined me for lunch and between perusing the menu and keeping a two-year-old occupied, it took some time to order. We were rewarded with a large basket of fresh tortilla chips and salsa after we finally made up our minds. We munched on the chips and enjoyed the red and green chile salsas, both of which were pretty mild.

All at once, our dishes arrived and I think we did pretty good overall. Dani ordered one of the house specialties, Chilaquiles with steak. Chilaquiles are quartered tortillas that have been fried and then stewed in (this case) a red chile mole sauce (kind of like dumplings) and then topped with black beans, queso and crema. It was also served with two, over-easy eggs and a nice portion of strip steak that was so tender and flavorful, it was difficult to steal just one bite. 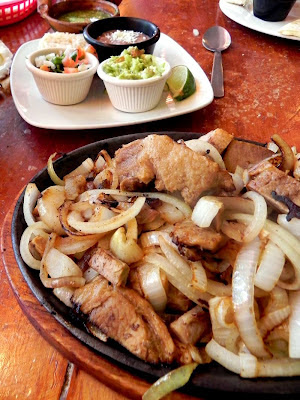 I ordered their Carnitas that came to the table sizzling on a hot plate with enough steam to double as a facial treatment. There were tender, mildly seasoned chunks of pork and sauteed onions that I ate with their house made flour tortillas, fresh guacamole, pico de gallo, refried beans and seasoned rice.

Even Posie made out like a bandit with a simple, delicious oaxaca cheese quesadilla that came with sour cream and guacamole, both of which she thoroughly enjoyed, as was evidenced by what was left on her hands and face. Unfortunately, she couldn't eat all of the quesadilla, though, fortunately we were there to help her...