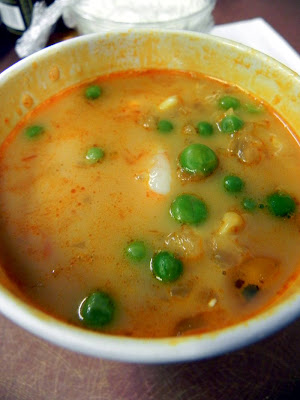 I missed out on Marisol, was ill when he made Persian food at Bacchanal and just never seemed to make it down to Mimi's of River Ridge, but I was determined to finally get a taste of Chef Pete Vazquez's culinary magic when I heard about his new pop-up in Stein's Deli called the Hush Supper Club. I missed the first Sunday when Chef Pete was offering an enticing and extremely affordable menu consisting of various Burmese dishes, but John and I made it this past weekend for an array of Latin American cuisine.

This time, our cab ride was surprisingly sedate and we made it to Stein's Deli only 15 minutes into the dinner service. Dan Stein was working the counter with his usual charm ("Talk to me...") and we could see Chef Pete behind him, working hard to kick out some really fantastic food. We ordered five dishes, including a dessert, and were infinitely pleased to see the tab tally up to no more than $30. 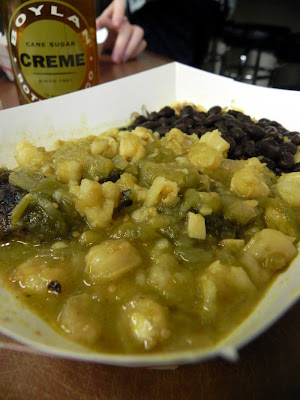 It wasn't long before they were calling my name and our order arrived intensifying the heady, spicy aroma that had hit us in the face when we walked through the door. My mouth started to water as we unwrapped each dish from its paper container, beginning with a half-pint cup of Peruvian Shrimp Chowder. Several large pieces of tail-on shrimp were floating around in a rich, spicy broth with peas, corn and small chunks of potato. The soup was so tasty that it was not long before I was slurping down the last drops, much to John's disappointment.

I also ordered the Chimayo Spiced Duck Confit with Posole Chile Verde. Thick chunks of dark, richly spiced duck were hiding under a heavy layer of chile verde laden with tart tomatillos. Served alongside was a generous helping of black beans and rice. There was quite a bit of food between the two dishes and John gladly helped me finish of the last bite of duck. 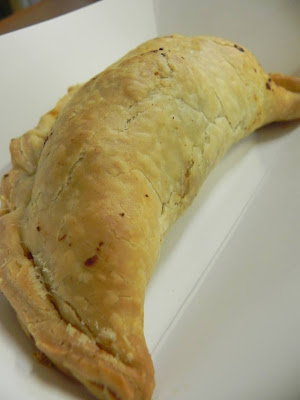 John's choices were just as delicious, the Three-Meat Empanada and a Chicken Tamale. The large empanada had a wonderfully flaky crust and stuffed full of what I believe was moist duck, chicken and pork with finely chopped chiles and peppers. Unfortunately, I only was able to get in one bite before it disappeared. The chicken tamale was much more mild in flavor, with the shredded, seasoned chicken surrounded by a corn or hominy dough and wrapped in the traditional corn husk.

As we were about to start on dessert, I saw other friends who are fans of Chef Pete come into the deli and step in line including wine enthusiast Tim McNally and his wife Brenda, plus Food & Libations writer Anne Berry who works with me at Where Y'at Magazine. They all eyed our practically empty containers and seemed just as excited for their Latin American food adventure as we were. By the way, the dessert was an Ibarra Chocolate and Dulce De Leche Pot de Crème. It seems that John isn't a huge fan of cinnamon and I was forced to eat the whole, creamy pudding all by myself. Poor me...

Next Sunday, I believe Chef Pete will be serving Indian food with dire promises to burn our collective faces off...I can't wait!

*P.S. Stein's Deli is easily one of the most authentic and incredible delis in New Orleans and is worth a blog report in an of itself. Coming soon!
Written by Unknown
Email ThisBlogThis!Share to TwitterShare to FacebookShare to Pinterest