Rewrite: Missing the heat at the Basil Leaf

A few days ago I was working on two pieces, this blog and another article, for approximately 5 hours. Just as I was putting the finishing touches on both, my computer crashed and I lost everything. After slowly realizing that throwing my keyboard against the wall and screaming at the top of my lungs would not bring back those missing hours (and missing work), I adjourned to my bedroom, ate some Peanut M&M's, and passed out.

The thing is, I've already wrote this blog and I simply can't bring myself to write it again. I have been trying for several days now and it just won't come out of me this time. I am blocked, stymied, stalled and I can't see getting out another piece until I finally wrap this up. So, meaning no disrespect to the Basil Leaf, here's what we ate: 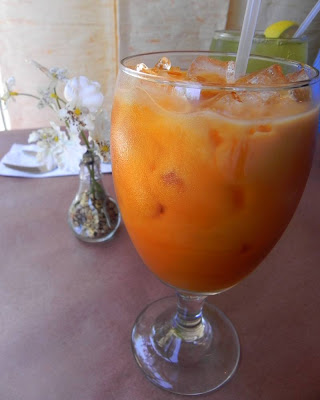 You can't eat Thai food without the tea...it's mandatory! 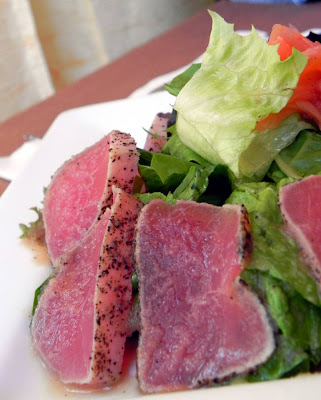 This was John's appetizer, a fabulous peppercorn-coated and seared tuna with a ginger-sesame dressing. 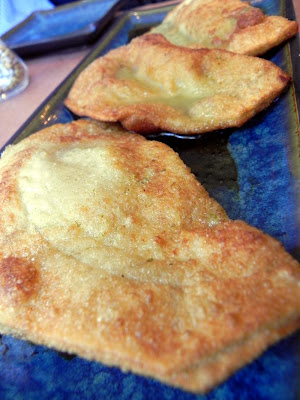 The shrimp and pork stuffed dumplings were delicious, though the minute amount of stuffing (maybe a teaspoon) was kind of disappointing. 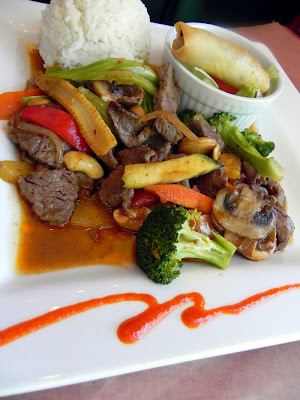 John's entree was Siam Beef. The sliced filet was sauteed in a wine chili sauce with vegetables, cashews and pineapple and served with Jasmine rice, and though it was spicier than my dish, it was pretty mild for the kind of Thai cuisine I am accustomed to. 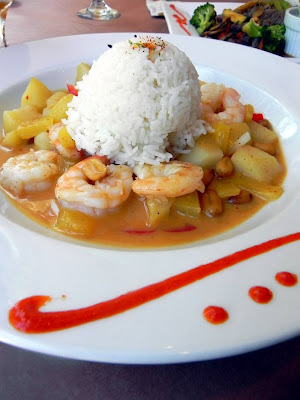 Unbeknownst to me, you can request a higher level of heat from almost any dish at the Basil Leaf, but there is no where that is stated on their menu as far as I could see. I had to ask the waitress. 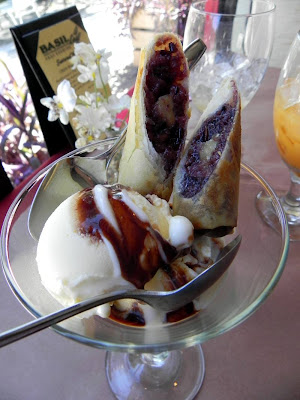 We certainly had no trouble gobbling down the dessert, fried bananas with vanilla ice cream and chocolate syrup. Next time I visit the Basil Leaf, I am definitely going to request they kick it up a notch, but the food was hot, fresh and prepared to order.

Again, I am sorry this is not my usual type of blog, but like I said earlier, I WROTE THIS ALREADY! (grumble)

*P.S. Is it just me, or does anyone else find it odd that they are also serving sushi now at the Basil Leaf?
Written by Unknown
Email ThisBlogThis!Share to TwitterShare to FacebookShare to Pinterest